The Winter Games kicked off in this ski-resort town with a volatile blend of geopolitics and Olympic pageantry, foreshadowing an event in which international intrigue will provide a dramatic backdrop for sporting grandeur.

In an Opening Ceremony on Friday staged just 50 miles south of the inter-Korean border, delegations from the two Koreas walked into the stadium together under a unified flag. 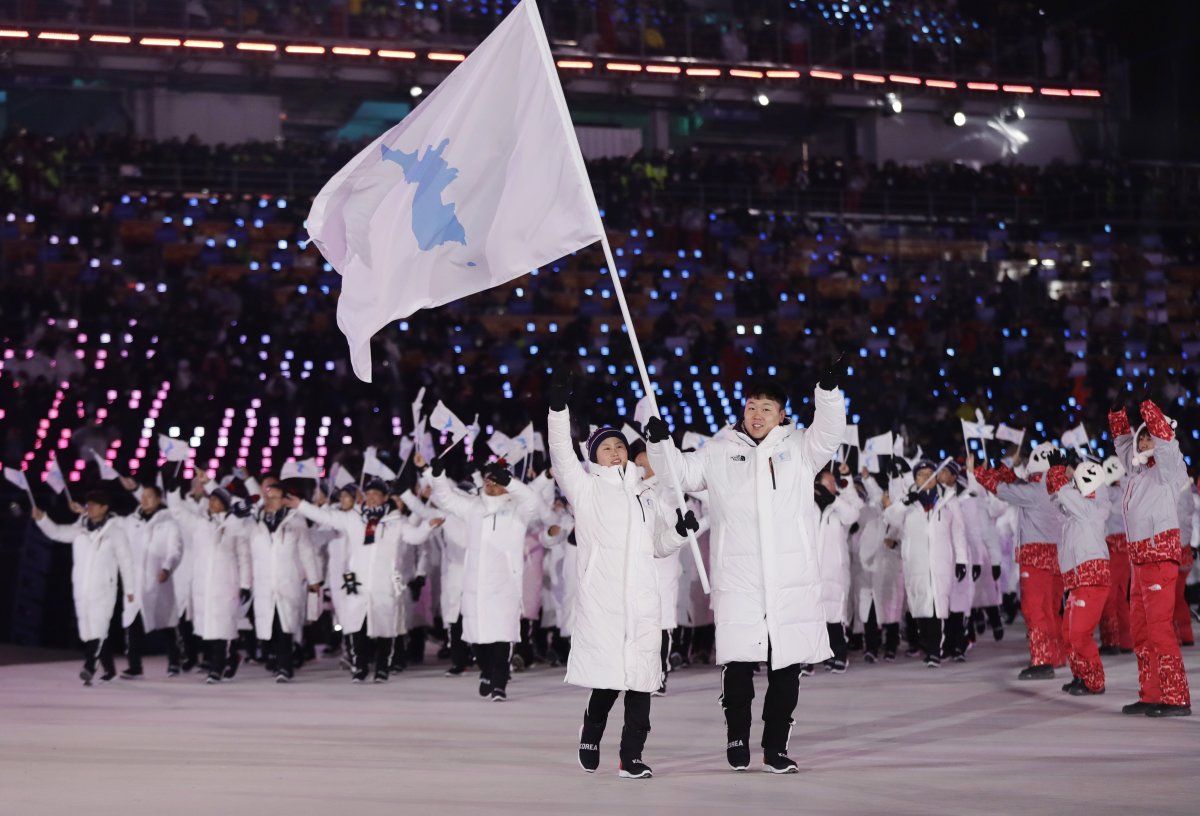 U.S. Vice President Mike Pence, who earlier in the day called North Korea “the most tyrannical regime on the planet,” was among the attendees, along with Kim Yo Jong, the younger sister of North Korean leader Kim Jong Un, a surprise last-minute guest whose every move was tracked closely by the South Korean media.

The North Korean delegation, which included Kim Yo Jong and Kim Yong Nam, the country’s ceremonial head of state, sat just one row back from Mr. Pence and his wife on the dais at the Opening Ceremony. The two sides appeared to have avoided any interaction.

The ceremony itself was filled with nods to traditional Korean motifs, including the yin-yang symbol of cosmic harmony that appears on the South Korean flag. The traditional Korean folk song “Arirang,” a mournful song of longing that is an unofficial national anthem on both halves of the Korean Peninsula, played a prominent role in the proceedings. 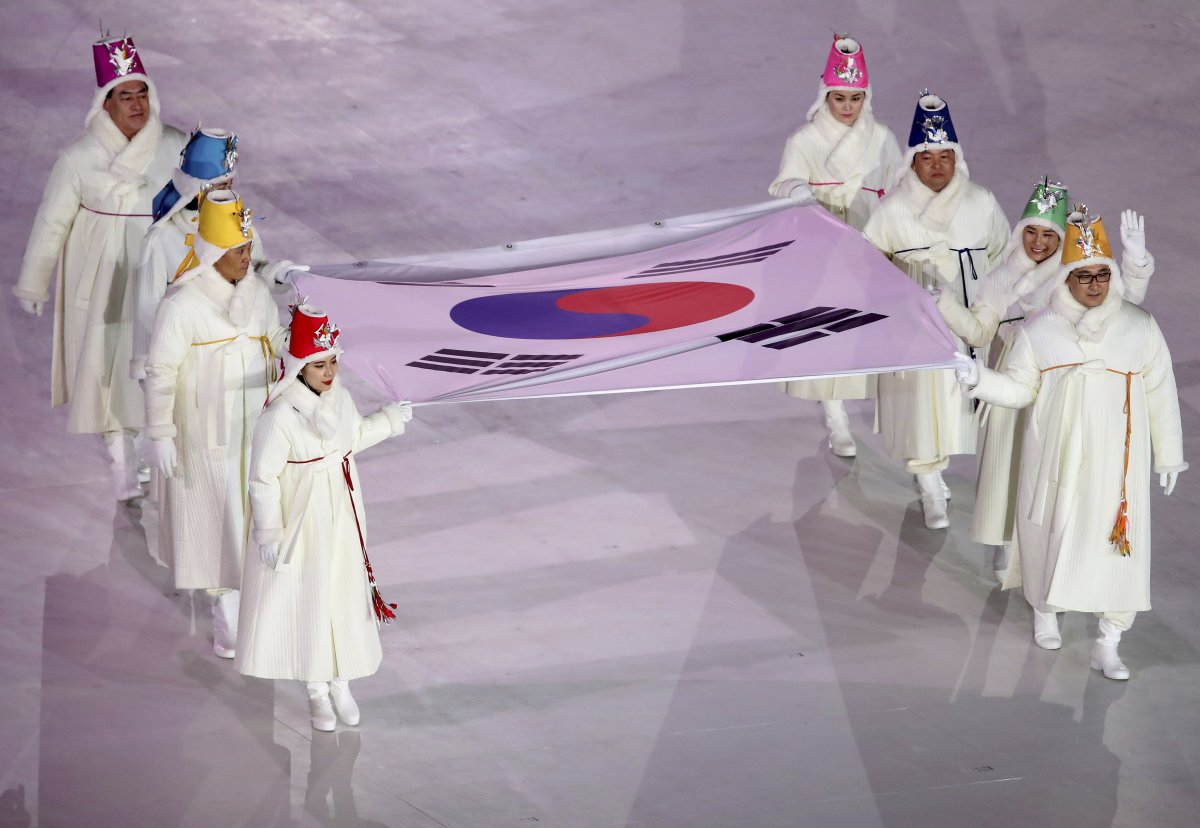 Meanwhile, a mix of South Korean pop music, including rapper Psy’s ubiquitous global 2012 hit “Gangnam Style,” provided the soundtrack as warmly-clad athletes—with the exception of Tonga’s shirtless Pita Taufatofua—marched into the open-air stadium in nighttime temperatures that fell below freezing.

Among the event’s oddities was the entrance of the delegation of Russian athletes. The Russian Olympic Committee is currently banned by the International Olympic Committee for its alleged state-sponsored doping scheme in Sochi in 2014, but 168 athletes were permitted to compete as Olympic Athletes from Russia, or OAR, through an intense selection process. The squad marched into Pyeongchang Olympic Stadium wearing beige coats, without their national flag, and a local volunteer carrying the IOC flag to lead them. 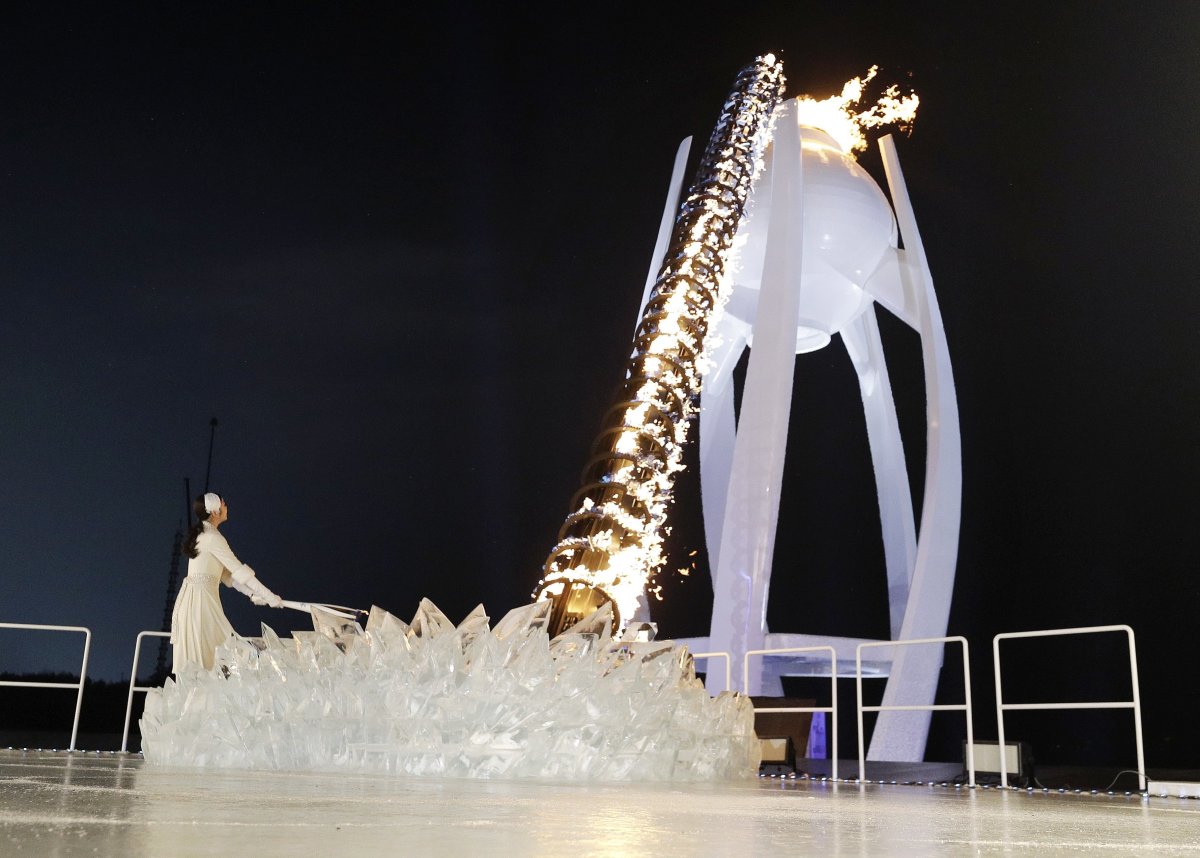 The U.S. team was led by flag-bearer Erin Hamlin, a luger. Beforehand, speedskater Shani Davis expressed anger in a Twitter post over Team USA choosing the bearer by coin flip. A U.S. Olympic Committee spokesman defended the choice, saying the procedure is driven by athletes. 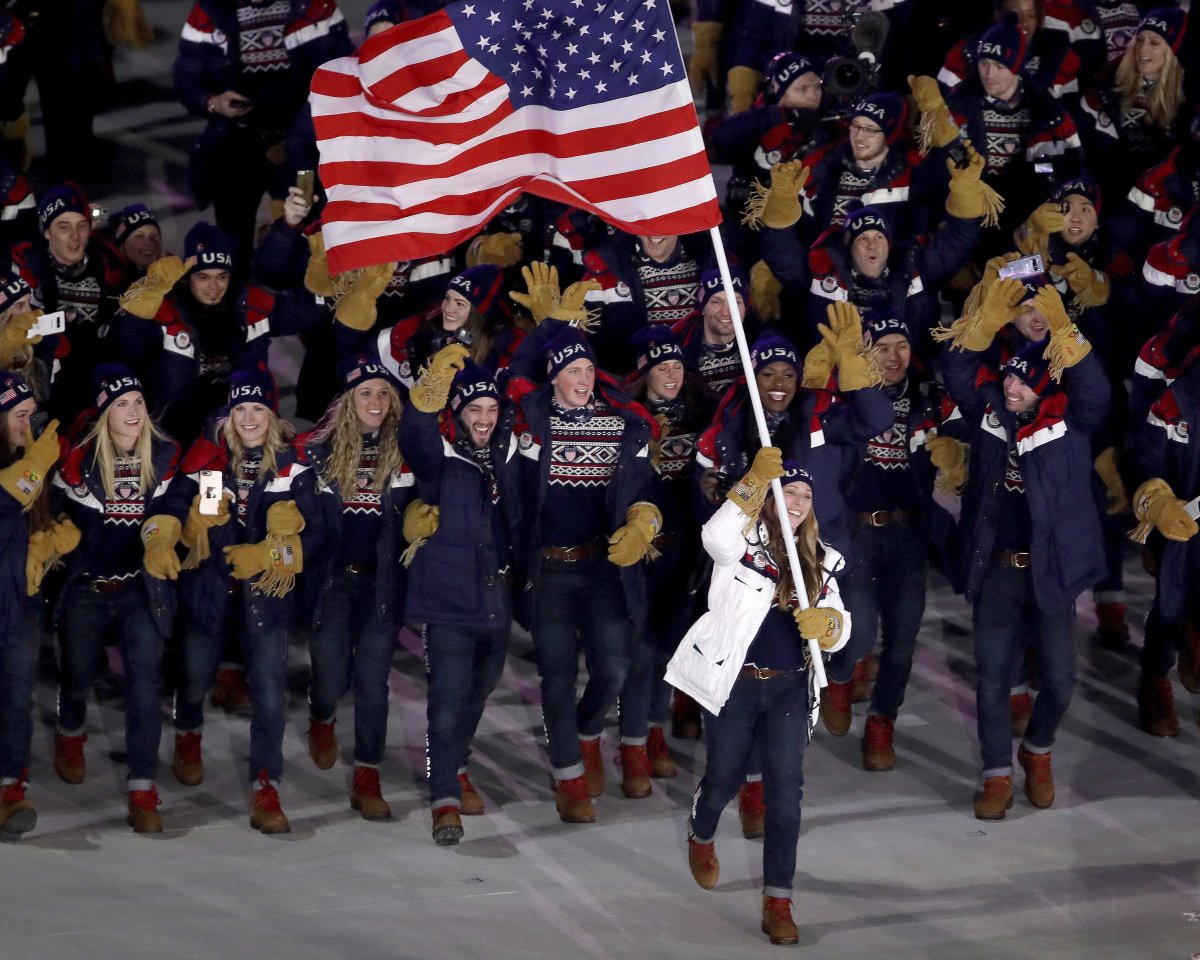 The entry of the inter-Korean delegation, under a unified flag depicting a silhouette of an undivided Korean Peninsula against a white backdrop, marked the emotional climax of an Olympiad that just a few weeks ago appeared set to be overshadowed by inter-Korean strife.

Instead, as the North and South Korean delegates marched into the stadium, South Korea’s president and his wife turned around to shake hands with Mr. Kim and Ms. Kim—the first handshake between a South Korean president and a member of the North’s ruling Kim family in more than a decade.

Later, two members of the inter-Korean women’s ice-hockey team carried the Olympic torch up a set of stairs and handed it to South Korean gold-medal figure skater Kim Yuna, the country’s most celebrated Olympic athlete. 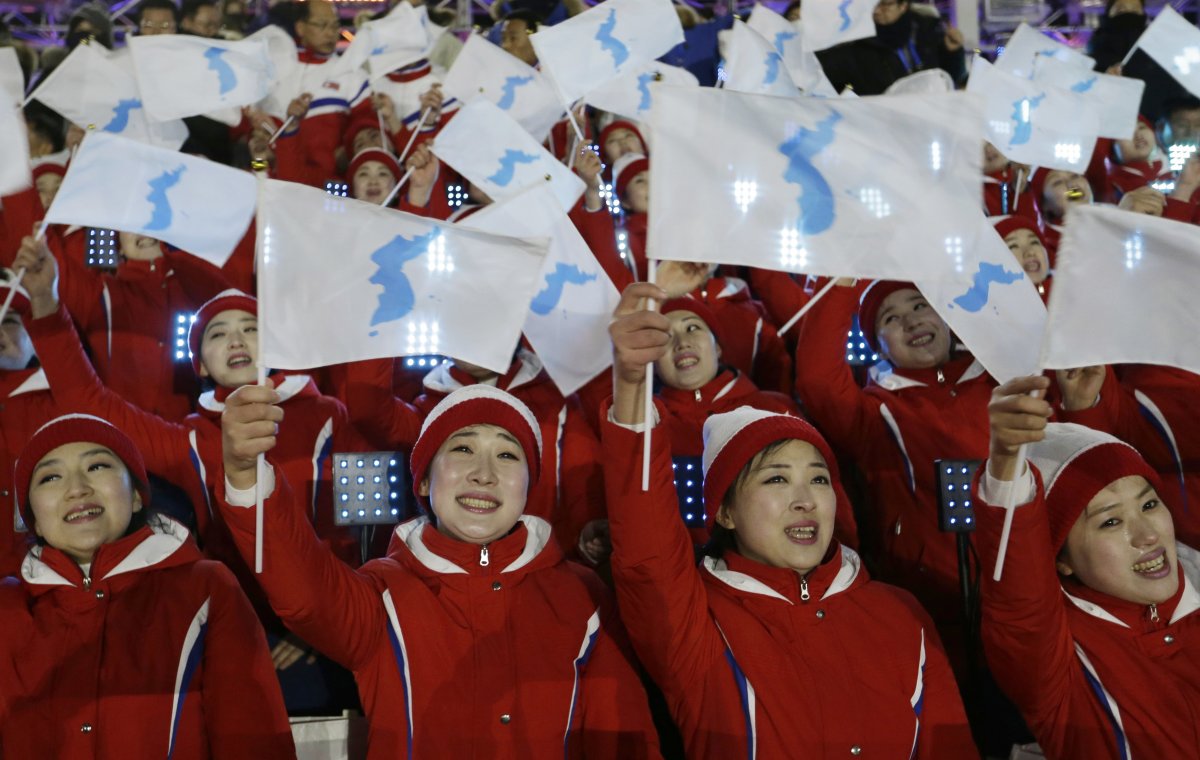 The two Koreas have walked into the Olympic Opening Ceremony together three times before, but never against such a backdrop of geopolitical crisis. Last year, North Korea detonated its sixth and most powerful nuclear weapon and launched two new intercontinental ballistic missiles capable of reaching the U.S. mainland.

Mr. Kim, meantime, has traded public threats with President Donald Trump, whose administration is weighing military options to halt North Korea’s nuclear program—a move that could trigger a broader conflict in a region that is home to more than a quarter of the world’s population. 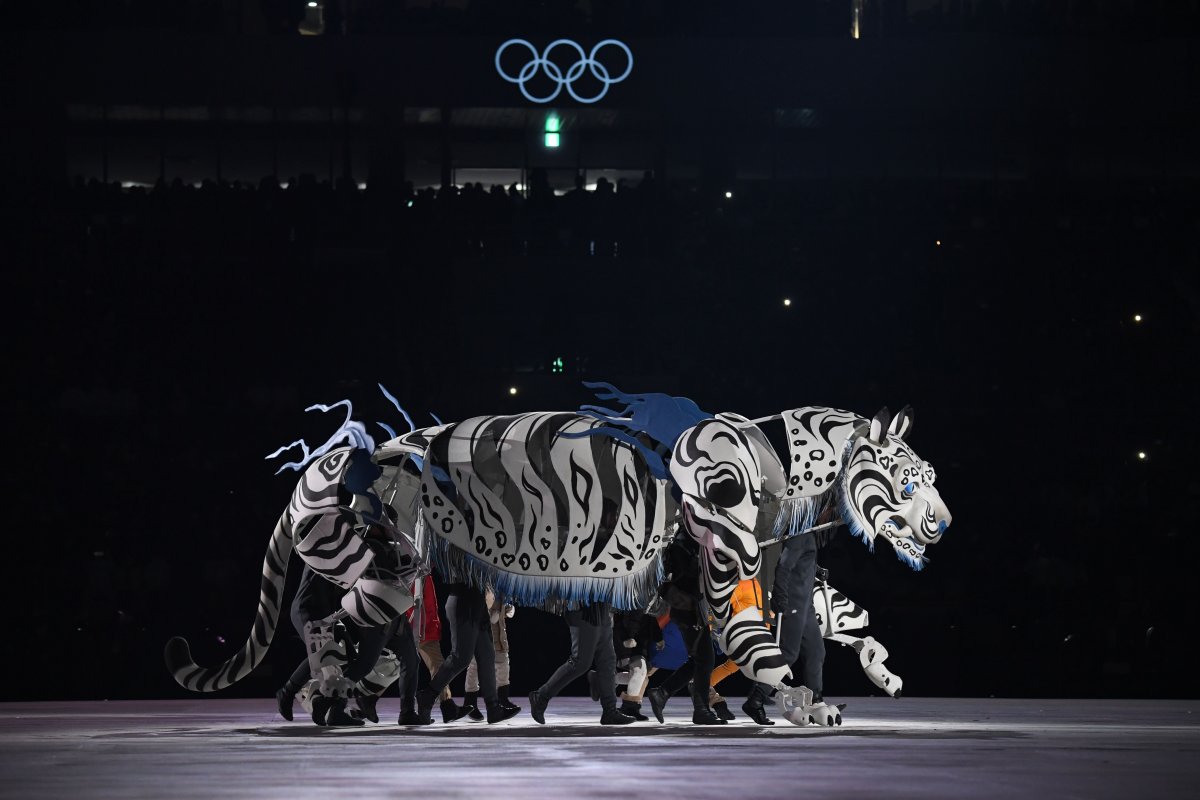 With those tensions hanging over the Games, organizers in South Korea spent the past few months aggressively courting North Korea’s participation in the Olympics—as insurance against any provocations from Pyongyang, but also as a powerful symbol of the “Peace Olympics” that the Pyeongchang bid committee successfully pitched when it won hosting duties back in 2011.

Most of the drama took place offstage. Hours before the Opening Ceremony, South Korean President Moon Jae-in hosted Mr. Pence and a North Korean delegation that included Kim Yong Nam at a nearby reception. 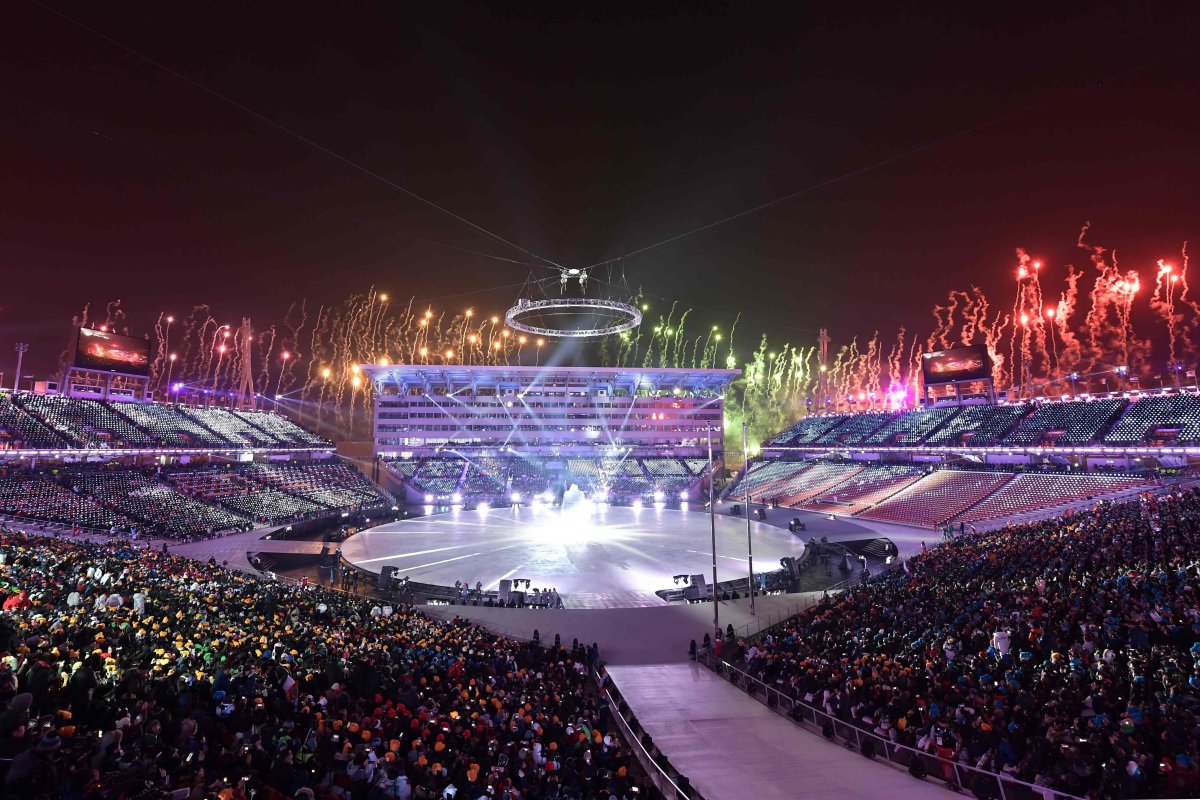 “Had it not been for the Pyeongchang Olympics, some of us might not have had chance to be together in the same room,” Mr. Moon said in remarks directed at the North Korean and U.S. delegations, as well as other political dignitaries from around the world. “We are here together and that alone will be a precious starting point for a step forward toward world peace.”

Kim Yong Nam shook hands with Japanese Prime Minister Shinzo Abe, whose nation was rattled last year by a North Korean missile that flew over its main islands. But Mr. Pence, who had left the door open to a meeting with North Korea’s delegation, didn’t shake hands with Kim Yong Nam during the reception, according to a pool report and a statement from South Korea’s presidential Blue House. 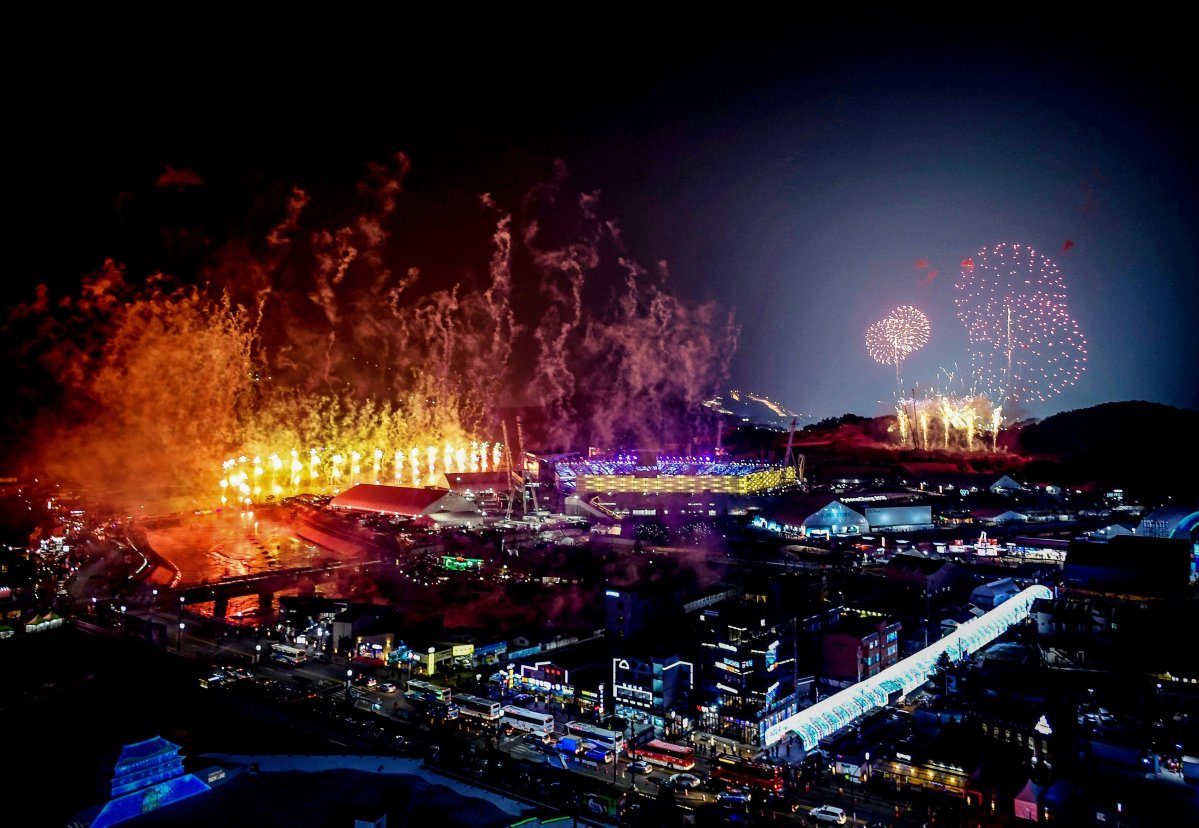 Instead, Mr. Pence spent the hours before the Opening Ceremony spotlighting human rights abuses by North Korea’s leaders. Mr. Pence traveled with the father of Otto Warmbier, the U.S. undergraduate who died six days after he was returned home following a yearlong detention in North Korea last year. The U.S. vice president met with North Korean defectors and inspected a South Korean naval vessel that was sunk by a North Korean torpedo in 2010.

He dismissed North Korea’s participation at Pyeongchang as a “charm offensive” that the regime had launched at three previous Opening Ceremonies—most recently at the 2006 Winter Games, which came just eight months before it tested its first nuclear bomb.

“Whatever images may emerge against the powerful backdrop and idealism of the Olympics, North Korea has to accept change,” Mr. Pence said. “They have to abandon their nuclear ambitions.”

Kim Yo Jong, the younger sister and close confidante of North Korea’s leader, is the first member of North Korea’s ruling Kim dynasty to ever set foot in the South on an official visit. She was more reticent on Friday. She arrived by private jet at South Korea’s main international airport in the afternoon, where she was received by Seoul’s Minister of Unification and whisked away by high-speed train to the mountains around Pyeongchang.