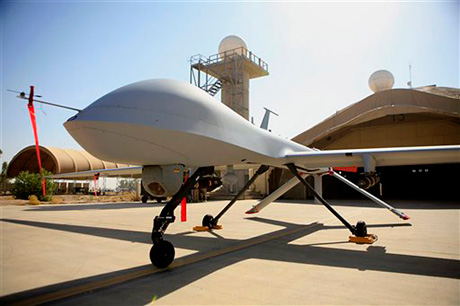 An American "Reaper" flying hunter-killer robot assassin rebelled against its human controllers above Afghanistan on Sunday, and a manned US fighter jet was forced to shoot the rogue machine down before it unilaterally invaded a neighbouring country.

The Reaper, aka MQ-9 or Predator-B, is a large five-ton turboprop powered machine able to carry up to 14 Hellfire missiles - each capable of destroying a tank or flattening a building. It is used by the US and British forces above Afghanistan as a "persistent hunter-killer against emerging targets".

According to USAFCENT Public Affairs:

The aircraft was flying a combat mission when positive control of the MQ-9 was lost. When the aircraft remained on a course that would depart Afghanistan's airspace, a US Air Force manned aircraft took proactive measures to down the Reaper in a remote area of northern Afghanistan.

The statement goes on to say that the errant killdroid "impacted the side of a mountain" and that there "were no reports of civilian injuries".

USAFCENT don't specify just what manned jet went up against the mutinous machine, or what methods the pilot used. However the logical choice would be a fighter plane - probably an F-15, -16 or -18 - and the cheapest and most fun weapon to use would be cannon fire. Opposition from the Reaper wouldn't be an issue, as it is a low-performance aircraft compared to a jet fighter and has no air-to-air capability.

It wasn't clear from the US military announcement whether the erratic death-bot had turned on its masters and was planning an attack on critical US logistics bases located north of the Afghan border, or whether it had sickened of reaping hapless fleshies like corn and was hoping merely to escape. Alternatively the machine assassin may merely have succumbed to boredom or - just possibly - a mundane, non-anthropomorphic technical fault of some kind.