Update: For more on this story check out Terry Melanson's post The Latest Shenanigans of Benjamin Creme, the so-called “prophet of Maitreya”. A guy named "Raj Patel" is speculated to be the Maitreya.

Call Me Brian, response from Raj Patel himself on this.

The way prepared by His Herald the ‘star’, Maitreya, the World Teacher, has given His first interview on American television. Millions have heard Him speak both on TV and the internet.

His open mission has begun.

He was introduced not as Maitreya, the World Teacher and Head of our Spiritual Hierarchy, but simply as a man, one of us. In this way He “ensures that men follow and support Him for the truth and sanity of His ideas rather than for His status”.

He spoke earnestly of the need for peace, achievable only through the creation of justice and the sharing of the world’s resources.

This is the first of many such interviews which will be given in the USA, Japan, Europe and elsewhere, bringing His message of hope to the world. 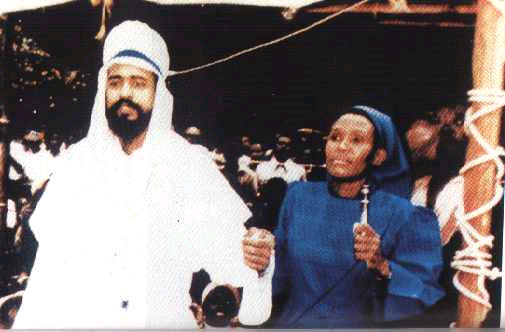 This is apparently Maitreya in 1988

In the very near future a large, bright 'star' will appear in the sky visible to all throughout the world.

Benjamin Creme discusses the 'star' and the desire for some measure of public debate about the significance or meaning of the 'star'.

Related: What was that Blue Light Spiral in Norway?

Read more about the starsign

Read more about the Maitreya

When humanity sees Maitreya, whether they recognize Him or not, they will feel obliged to support Him or to reject Him and all He stands for: sharing, justice and peace. Thus will men be divided and known. Thus will the Sword of Cleavage perform its destined task, and thus will Maitreya know the readiness of men for change. Appearing before men as one of them, the Great Lord ensures that men follow and support Him for the truth and sanity of His ideas rather than for His status.

Nevertheless, it matters not whether they recognize Him as Maitreya, as the Christ, or simply as a man Whose wisdom coincides with their own aspiration for justice and peace, for a better world for all men.

Gradually, we must assume, many will begin to see Maitreya as the One awaited by all religious groups under their various names, and will call Him thus. Some will say: “He must be the Mahdi,” while others will declaim: “Krishna has come again, the law is fulfilled!” Others will ask: “Surely he is the Messiah, come at last,” while still others will see Him as the Christ or Maitreya Buddha. All will see Him as their Expected One, fulfilling their hopes and come to fulfill their needs.

Maitreya will neither affirm nor deny these claims nor should those among His workers who believe they have recognized Him. Not until the Day of Declaration will Maitreya acknowledge His true identity and status.

On that glorious day men will know, beyond all gainsaying, that their long wait has not been in vain, that help, indeed, is at hand, that the Teacher is ready to aid and guide. That He comes as an Elder Brother rather than a Saviour, ready to take the lead to save our planet, and to enable men themselves to restore sanity to their lives and ways of living.

Maitreya will show that our problems are many but solvable. That the solution to all is already in our hands. That the simple act of sharing, alone, has the power to transform life on Earth for the better. He will ask for man’s trust, as an Elder Brother, that He will not lead them into other than their destined path of harmony and love, that they have nothing to fear but their fear, and that the way ahead already has the blueprint of the Divine.

Thus will Maitreya ease the way for men to embark on a transformation huge in scope, involving all men and women everywhere, a transformation which will launch humanity into a glorious enterprise, the restoration of Planet Earth to its rightful place among its sister planets of our system.

For more on the Antichrist and the New Age Messiah, listen to our radio program with John Lash on he Antichrist, One World Religion & 2012

Also don't miss our series with Rik Clay that connects with the topic of the Messiah.

More on the Norway Spiral with William Henry.

Patrick Heron talks about the return of the Antichrist and the New World Order.