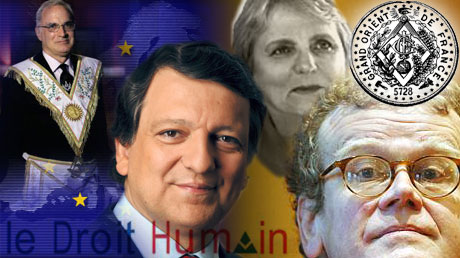 Top Left: António Reis Grandmaster of Grand Orient Lusitano (Portugal), top right: Yvette Nicolas Great Teacher of Women's Grand Lodge of France, bottom left: José Manuel Barroso President of the European Commission, bottom right: Jean-Michel Quillardet, Grand Master of the Grand Orient of France.
The French Federation of Le Droit Humain represented by its president, Michel Payen, met on April 8, 2008 with the president of the European Commission, José-Manuel Barroso, [...] This meeting constitutes a major event regarding the place of Freemasonry in the construction of Europe; this place was underscored not only by the interest and attentiveness that President Barroso showed to the delegation and the time he accorded them, but also by the commitments he made to the values espoused by liberal and adogmatic Freemasonry, its positions and its opinions on subjects of concern. It was the first time that Freemasonry, as such, was able to express itself to such a high level European institution.

The delegation received assurances from President Barroso of his attachment to the spirit of "laïcité" and to the principle of separation of religion from the State. The delegation stressed the importance of the Enlightenment in the history of Europe, a dimension to be taken into account at least equally with its religious roots, and certainly more closely tied to the roots of antiquity.

Finally, a principle of communication between the liberal and adogmatic Masonic Orders and the services of the European Commission, to be used whenever needed, was decided upon. Thus the French Federation of Le Droit Humain will propose, in the near future, a recommendation concerning the principle of emancipation that ought to form the basis of all European education systems, in direct relation to a recognition of the contribution of the Enlightenment to the common culture of the peoples that compose Europe, and in accordance with the principles of the Charter of Fundamental Rights.

Ed Comment: Because of curiosity I traced the original document/press release from Droit-Humain (found here, pdf), and translated it using Google Translate.

The French Federation of Human Rights represented by its President, Mr Michel Payen, was received on April 8, 2008 by the President of the European Commission, Mr Jose-Manuel Barroso, in a delegation composed of the Women's Grand Lodge of France, the Grand Orient of Portugal and Grand Orient of France who had taken the initiative of this rendezvous in agreement with other obédiences adogmatiques at the meeting of the Grand Masters and Presidents of January 2008.

This meeting is a major event about the role of Masonry in construction
of Europe, this place has been highlighted not only by the interest and listening real as President Barroso has shown the delegation and the time he spent but also by the commitments made in terms of attention to the values defended by Freemasonry liberal and adogmatique, its position and his opinion on major issues that concern them. That is the first time that Freemasonry has been able to speak es quality at such a high-level forums European.

The delegation was assured of the commitment of President Barroso to freedom of conscience, the spirit of secularism and the principle of separation of religion from the state. The delegation pointed out the importance of the Enlightenment in Europe's history, size to be
has at least as far as the religious roots and certainly more in line with its roots antiques.

Finally, the principle was incorporated in a communication of orders and Obediences liberal and Masonic adogmatiques with the Commission as necessary. Also, the French Federation of Human Rights will Does in the near future a proposal recommendation on the principle of emancipation which should underlie all education systems in Europe, directly related to the recognition of the contribution of Enlightenment
in the common culture of the people who compose it and in accordance with the principles of the Charter Fundamental Rights.
Accordingly, the Freemasons of the French Federation of Human Rights are invited to discuss widely on issues concerning Europe and to raise their opinions for a original expression, strong and nourished can we characterize in the European debate.

Below is another press release from The Grand Orient de France

Receiving GODF by the President of the European Commission

For the first time since the creation of the European Union, the Grand Master of the Grand Orient of France Jean-Michel QUILLARDET, accompanied by a delegation representing all Obediences Masonic Europe, was received on April 8, 2008 by Mr. José Manuel Barroso, President of the European Commission.

The Grand Master and his delegation reaffirmed their commitment to freedom of conscience and concern about the return of religious fundamentalism and in Europe. President Barroso has, meanwhile, stressed the importance of the process of separation of church and state.

The historical roots of Europe were also raised by President Barroso has recognized the decisive contribution of the Enlightenment and the necessity of secularism.

The delegation gave him a note. It was decided to continue this constructive dialogue through regular exchanges between the Commission and the European Obediences Masonic liberal and adogmatiques.

The Grand Master also called the European Union to a firm position regarding the unacceptable suffering for Human Rights in China.

The delegation was composed of:

Obediences on behalf of the European liberal and Masonic adogmatiques.

More:
Buttiglione 'outs' his EU successor as a Freemason (scroll down for article) 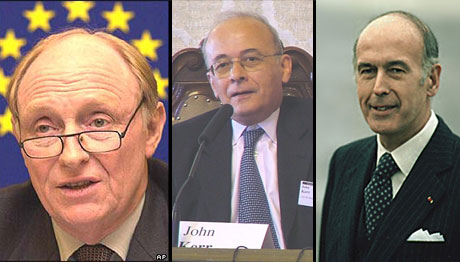