The problem with the internet, as we all know, is that it gives free rein to loonies. Once upon a time, green inkers would rant away on writing paper, seal their 30-page global conspiracy theory into a recycled envelope and post it to a newspaper, which would drop it harmlessly into a wastepaper basket. Now they infiltrate chat rooms, scrawl anonymous abuse in web discussions and even have their own video blogs.

Sometimes this is entertaining; sometimes it can be offensive. So Microsoft has just been awarded a patent for technology designed to automatically detect and remove “undesired words or phrases” from all manner of digital communications, ranging from YouTube broadcasts to internet chat and songs.

The patent describes a system that listens out for phonemes (word fragments) likely to be part of a swearword. If it thinks it hears a forbidden phrase, the software either fades out the offending syllables or simply replaces the rude word with a similar-sounding but clean alternative lifted from earlier speech without a second’s delay. 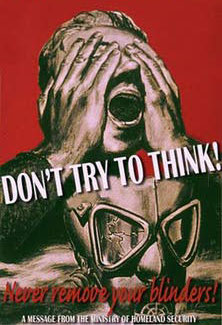 With Microsoft’s software put in place by parents, children could listen to the most explicit rap music and hear nothing stronger than “gosh darn mother flippers”. Theoretically, the software could monitor thousands of digital TV broadcasts, radio stations and web chats simultaneously.

That’s all to the good, as long as the targets are “trolls” (internet slang for people whose aim is to disrupt the web community). There’s a danger, though, that it could go too far. Who’s to say that an overzealous Microsoft employee might not accidentally on purpose blacklist the names of rivals such as Apple and Linux?

Worse, there are governments around the world that would probably go further still, suppressing dissent not with guns and clubs but by preventing people from even discussing concepts such as “protest” or “freedom”. And that, I’m sure you’ll agree, is a freaking scary idea.