Jan 12, 2007 By Henrik Palmgren | redice.tv
Hahaha, Please read the article below. It's based on a survey of 1,000 Swedes, oh wow that’s a bunch! This is a perfect example of how to sway public opinion with polls and survey's. 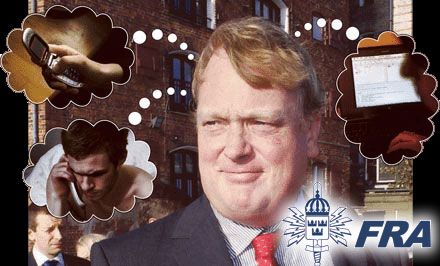 Above: Sweden’s Minister of Defence Mikael Odenberg (Moderate party), he’s the guy behind the most recent proposition to bug Swedes telephone calls, emails and SMS.

Let's not forget that Odenberg's predecessor Leni Björklund (Social democrat) already two years ago tried to give FRA (försvarets topphemliga spionavlyssningscentral or National Defense Radio Establishment) the right to spy on Swedish citizens, without suspicion of crime being committed. And former Minister of Justice Thomas Bodström (Social democrat) also wanted to give SÄPO ( Swedish Security Service) the legal right to do so called “preventive bugging”.

All of these guys and gals work for the same team! They regurgitate the same stupid propositions on a regular basis to keep the discussion on this level. Illegal bugging and spying by SÄPO among others have been going on since the 70’s in Sweden, so the energy and focus should be on the organizations working above the law. But that doesn't make it any less scary that they actually are trying to implement so called “preventive bugging.” (We're getting closer to Philip K. Dick's PreCrime).

A large majority of Swedes like the idea of additional surveillance to aid in the hunt for terrorists and serious criminals.

A survey carried out by Statistics Sweden shows that a full 80 percent of Swedes favour increased surveillance.

But while the general public supports plans to keep a closer eye on the population, public bodies have been lining up to criticise defence minister Mikael Odenberg's proposal to permit the monitoring of ordinary citizens' phone calls and email.

Writing on behalf of the Register Board, former intelligence chief Anders Eriksson warned of the possible effects of the minister's proposal.

"If the bill is implemented Sweden will become a warning example of what can happen to the rule of law and the protection of personal integrity," wrote Eriksson.

The Swedish Security Service described the proposal as "alien to the form of government to which we are accustomed".

"We know from experience that all surveillance entails a risk of abuse and leaks," he wrote in Thursday's Dagens Nyheter.

But the survey of 1,000 Swedes carried out on behalf of the Committee for the Protection of Integrity, showed overwhelming support for extended surveillance, according to Sveriges Radio.

Almost 80 percent of those surveyed thought that citizens should be checked more thoroughly in order to tackle terrorism and serious crime.

An even higher number, 87 percent, were of the opinion that police should be able to secretly bug telephones and access computers.

Just over half of the people surveyed, 51 percent, were in favour of a DNA register of all citizens.

The idea of having more camera surveillance in public places was supported by 97 percent of respondents.