Jun 11, 2013 Source: independent.co.uk
Revealed: how the spy agency used unwitting artists such as Pollock and de Kooning in a cultural Cold War 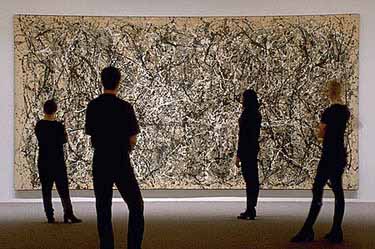 For decades in art circles it was either a rumour or a joke, but now it is confirmed as a fact. The Central Intelligence Agency used American modern art - including the works of such artists as Jackson Pollock, Robert Motherwell, Willem de Kooning and Mark Rothko - as a weapon in the Cold War. In the manner of a Renaissance prince - except that it acted secretly - the CIA fostered and promoted American Abstract Expressionist painting around the world for more than 20 years. 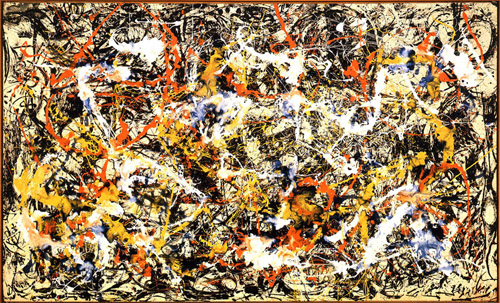 Pollock, Convergence, 1952
The connection is improbable. This was a period, in the 1950s and 1960s, when the great majority of Americans disliked or even despised modern art - President Truman summed up the popular view when he said: "If that’s art, then I’m a Hottentot." As for the artists themselves, many were ex- com- munists barely acceptable in the America of the McCarthyite era, and certainly not the sort of people normally likely to receive US government backing.

Why did the CIA support them? Because in the propaganda war with the Soviet Union, this new artistic movement could be held up as proof of the creativity, the intellectual freedom, and the cultural power of the US. Russian art, strapped into the communist ideological straitjacket, could not compete.

The existence of this policy, rumoured and disputed for many years, has now been confirmed for the first time by former CIA officials. Unknown to the artists, the new American art was secretly promoted under a policy known as the "long leash" - arrangements similar in some ways to the indirect CIA backing of the journal Encounter, edited by Stephen Spender.

The decision to include culture and art in the US Cold War arsenal was taken as soon as the CIA was founded in 1947. Dismayed at the appeal communism still had for many intellectuals and artists in the West, the new agency set up a division, the Propaganda Assets Inventory, which at its peak could influence more than 800 newspapers, magazines and public information organisations. They joked that it was like a Wurlitzer jukebox: when the CIA pushed a button it could hear whatever tune it wanted playing across the world.

The next key step came in 1950, when the International Organisations Division (IOD) was set up under Tom Braden. It was this office which subsidised the animated version of George Orwell’s Animal Farm, which sponsored American jazz artists, opera recitals, the Boston Symphony Orchestra’s international touring programme. Its agents were placed in the film industry, in publishing houses, even as travel writers for the celebrated Fodor guides. And, we now know, it promoted America’s anarchic avant-garde movement, Abstract Expressionism.

Initially, more open attempts were made to support the new American art. In 1947 the State Department organised and paid for a touring international exhibition entitled "Advancing American Art", with the aim of rebutting Soviet suggestions that America was a cultural desert. But the show caused outrage at home, prompting Truman to make his Hottentot remark and one bitter congressman to declare: "I am just a dumb American who pays taxes for this kind of trash." The tour had to be cancelled.

The US government now faced a dilemma. This philistinism, combined with Joseph McCarthy’s hysterical denunciations of all that was avant-garde or unorthodox, was deeply embarrassing. It discredited the idea that America was a sophisticated, culturally rich democracy. It also prevented the US government from consolidating the shift in cultural supremacy from Paris to New York since the 1930s. To resolve this dilemma, the CIA was brought in.

The connection is not quite as odd as it might appear. At this time the new agency, staffed mainly by Yale and Harvard graduates, many of whom collected art and wrote novels in their spare time, was a haven of liberalism when compared with a political world dominated by McCarthy or with J Edgar Hoover’s FBI. If any official institution was in a position to celebrate the collection of Leninists, Trotskyites and heavy drinkers that made up the New York School, it was the CIA.

Until now there has been no first-hand evidence to prove that this connection was made, but for the first time a former case officer, Donald Jameson, has broken the silence. Yes, he says, the agency saw Abstract Expressionism as an opportunity, and yes, it ran with it.

"Regarding Abstract Expressionism, I’d love to be able to say that the CIA invented it just to see what happens in New York and downtown SoHo tomorrow!" he joked. "But I think that what we did really was to recognise the difference. It was recognised that Abstract Expression- ism was the kind of art that made Socialist Realism look even more stylised and more rigid and confined than it was. And that relationship was exploited in some of the exhibitions.

"In a way our understanding was helped because Moscow in those days was very vicious in its denunciation of any kind of non-conformity to its own very rigid patterns. And so one could quite adequately and accurately reason that anything they criticised that much and that heavy- handedly was worth support one way or another."

To pursue its underground interest in America’s lefty avant-garde, the CIA had to be sure its patronage could not be discovered. "Matters of this sort could only have been done at two or three removes," Mr Jameson explained, "so that there wouldn’t be any question of having to clear Jackson Pollock, for example, or do anything that would involve these people in the organisation. And it couldn’t have been any closer, because most of them were people who had very little respect for the government, in particular, and certainly none for the CIA. If you had to use people who considered themselves one way or another to be closer to Moscow than to Washington, well, so much the better perhaps."

This was the "long leash". The centrepiece of the CIA campaign became the Congress for Cultural Freedom, a vast jamboree of intellectuals, writers, historians, poets, and artists which was set up with CIA funds in 1950 and run by a CIA agent. It was the beach-head from which culture could be defended against the attacks of Moscow and its "fellow travellers" in the West. At its height, it had offices in 35 countries and published more than two dozen magazines, including Encounter.