Modern shamans all the rage in South Korea

Feb 8, 2010 Source: globalpost.com
When I told my friends I would visit a Korean shaman, or mudang, their responses weren’t exactly reassuring. One Korean university student explained to me that evil spirits would hijack my body, prompting me to slit my wrists and drink my own blood until I became a minion of Satan. “Are you nuts? They’re evil!” another friend exclaimed.

I’m a skeptic, but even I was spooked. So I was relieved when the mudang — a mellow 44-year-old man who goes by the alias Mu-gyuk (literally “male exorcist”) — approached me with a gentle smile and a warm bow, hardly the appearance of the flesh-thirsty Dracula everyone said he would be. 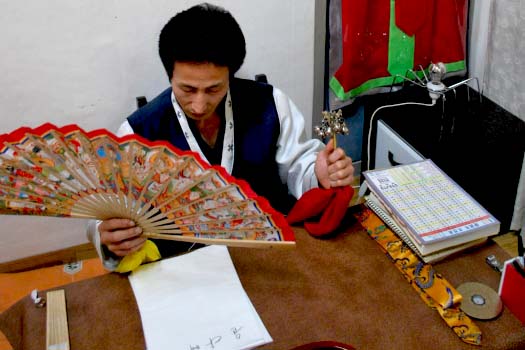 A South Korean shaman, who goes by the alias Mu-gyuk, underwent a rigorous initiation ceremony to become a shaman that included balancing on swords to show the evil spirits his strength. (Geoffrey Cain/GlobalPost)
For hours, Mu-gyuk reminisced about his life as a former gambling addict and prison convict, when he swears he “saw the light” and became a spiritualist. After his reform, Mu-gyuk claimed he got strange headaches and chest pains; doctors couldn’t uncover his ailment, so he consulted a mudang master who advised him to become one, too. At that point, he also claimed he could see ghosts.

So Mu-gyuk underwent a rigorous initiation ceremony that included balancing on swords to show the evil spirits his strength. Today, he couldn’t be happier.

“People say bad things about us [mudangs],” he reflected. “But we’ve managed to regain our popularity in Korea. I think people can see most of us want to help.” (He warned this correspondent of bad luck should he write stories about communist North Korea.)

Indeed, South Koreans are seeing a resurgence in interest in shamanism following decades of squeamish stereotypes, like those I encountered. That’s thanks to a wave of attention from popular culture — and to an economic crisis that has left jobless Korean youngsters in need of ancestral blessings and fortune readings.

After the Korean War, some scholars argued Korea’s indigenous religions would die out as the country entered a period of rapid modernization. Since the 1960s, the country has leaped from being one of the poorest in the world to a powerhouse of skyscrapers and Samsung gadgets. Mudangs were seen as backwards, and because of this, presidents tried to eliminate the craft until the 1980s.

As Korea’s cities sprouted up throughout those years, migrants from the countryside sought opportunities in Seoul. The mudangs, who wanted to keep their clientele, followed them — and today, most shamans can be found in cities, contrary to a stereotype among some foreigners. 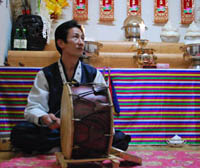 Today, however, mudangs are living in a different Korea, and they’ve found ways to fuse their ancient customs with their modern surroundings. It’s old meets new. Mudangs, for example, can pick the gods they worship among thousands — which, in addition to indigenous Korean gods, can include Jesus, Buddha, and oddly even former South Korean dictator Park Chung-hee.

Strangely, in the 1970s, under a pro-American government, some mudangs embraced General Douglas MacArthur as their deity, throwing on sunglasses and smoking a pipe to resemble him when they channeled his spirit.

Aside from that short-lived fad, shamanism isn’t funny business in Korea.
“Koreans take shamans' advice seriously,” said Kim Seong-nae, a professor of religion at Sogang University in Seoul, pointing out that mudism (the mudang belief system) is more a cultural custom than a religion like Christianity or Buddhism. “Most contemporary Koreans do not fear shamans or mudangs, but instead rely heavily on their counseling for significant life decisions such as birth, marriage, house moving, success, business and politics.”

To advise their clients, mudangs — most of whom are women — oversee religious ceremonies called kut, during which they bang loudly on cymbals to call spirits for guidance. Most charge between $20 and $80 for fortune-tellings; shadier shamans have been known to warn their clients of their impending death, then demand thousands of dollars to convince the spirits they should live.

Today, seeing a mudang is a practice is so widespread that even politicians consult mudangs, sometimes asking where they should relocate their ancestors’ remains to ensure good luck in their next election.

But with Asia’s largest population of evangelical Christians, the recent growth of mudism has sparked some uneasiness, too. “Mudangs’ activities come from ghosts who are the puppets of Satan,” said Park Young-mo, a Christian pastor in Seoul. “Their resurgence is thanks to young people who are having an identity crisis,” he added, pointing to teenagers experimenting with the art.

But critics of that stance point out that most Koreans, regardless of their religion, perform rites for their ancestors in a manner similar to some mudang ceremonies. David Kwang-sun Seo, a Protestant theologian, argues that Korean Protestantism itself draws heavily on pre-Christian customs like mudism.

In South Korea’s version of Protestantism, he says, Koreans often interpret “receiving” the Holy Spirit as being literally possessed by it — a striking resemblance to mudangs, who also claim to be possessed by spirits. Therefore, he claims, Korean Protestants should take a more nuanced stance to their traditional ways.

For Mu-gyuk, the growing tolerance of mudangs in pop culture is good news, despite harking by skeptics. He’s particularly fond of a Korean reality TV show called "Exorcist," in which the crew follows a mudang on her daily works. “With the pop culture references, Koreans are starting to like mudangs again,” he ponders. “I don’t think old ways could really ever die.”


Dance of greeting gods and ghosts who died at the sea.

Neil Kramer - The Gates of Awakening & The Field Uplink