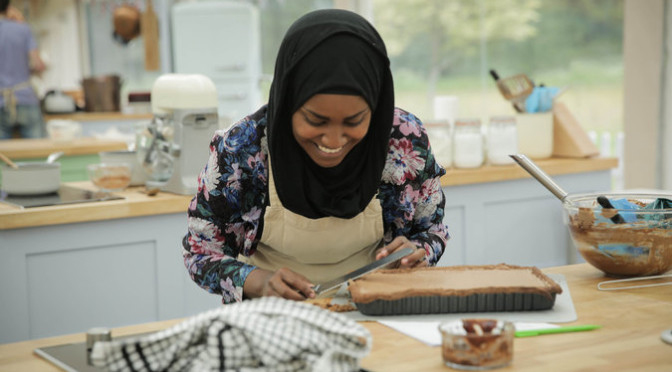 Last month, America rejoiced when a 14-year-old Muslim lad in Irving, Texas discovered time, thus solving the universe’s ongoing problem that everything happens at once. This month, Britain is exulting that a Muslim lady can cook better than most Brits. From the New York Times:

LONDON — Prime Minister David Cameron praised her coolness under pressure. Bookmakers monitored her performance as they do election candidates. Television watchers admired her raspberry mille-feuille and soda-flavored cheesecakes — along with her blue chocolate peacock, and a mountain of éclairs in the form of a nun.

The victory of Nadiya Jamir Hussain, a petite 30-year-old, head-scarf-wearing mother of three from northern England, in a wildly popular reality show called “The Great British Bake Off” on Wednesday has been greeted by many in Britain as a symbol of immigration success, at a moment when the country’s leaders, Mr. Cameron included, have expressed concerns that it has too many newcomers. …

The popular embrace of Ms. Hussain, the daughter of Bangladeshi immigrants, seemed like an immediate and conspicuous counterpoint to a widely noted speech on Tuesday in which the home secretary, Theresa May, told a conference of Conservative Party members: “When immigration is too high, when the pace of change is too fast, it’s impossible to build a cohesive society.”

News media across the ideological spectrum greeted Ms. Hussain’s win as a seminal cultural moment. “Never before has a Muslim woman wearing a hijab been so clutched to the nation’s bosom,” wrote The Telegraph, a conservative daily newspaper.

Ms. Hussain’s newfound status as a national role model was also seen by many as a powerful riposte to some of the anti-Muslim sentiment fueled by lurid reports of dozens of young Muslim Britons, including young women, who have gone to Syria to fight for the Islamic State. …

Shelina Janmohamed, a cultural commentator and author of “Love in a Headscarf,” a memoir about growing up as a British Muslim woman, noted that Ms. Hussain had managed to defy prejudice through her honesty, her cheeky sense of humor — and her baking prowess. In one particularly stressful episode, Ms. Hussain said she would rather brave childbirth again than try to bake another chocolate soufflé.

“I love Nadiya,” Ms. Janmohamed wrote in The Telegraph. “Millions of people up and down the country love Nadiya. She doesn’t even need a surname anymore.”

She added: “She’s the face of today’s Britain: authentic, honest, creative, emotional, heartfelt and honest. Oh. And she’s Muslim. And she just happens to wear a head scarf.”

“But this newly discovered baking genius,” Ms. Janmohamed said, “despite being Muslim, isn’t cooking up any kind of Shariah-flavored sponge or jihadi cupcakes.”

Others celebrated her as an example of female empowerment. Her husband, Abdul, a technical manager at a computer company, had encouraged her to apply to the show and to pursue her passion.

Next month, all of Sweden will celebrate a Muslim cabdriver parallel-parking without scratching either parked car. In December, the entire German news corps will lavishly praise a Muslim youth for deftly flopping on the soccer field and drawing a penalty kick from the ref without actually being fouled, thus proving Chancellor Merkel right about letting in millions of Muslims.