Jul 5, 2012 By Henrik Palmgren | redice.tv
It has been announced that a song by English alternative rock bank Muse has been chosen as the ’official song’ for the 2012 Olympics in London.

"Survival" was written and recorded by Muse at the request of Olympic Staff.

There has been mixed reception to the song: 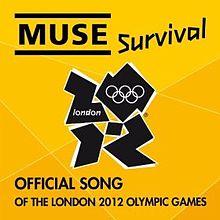 The Associated Press called the song "a thundering rock anthem".

NME columnist Mark Beaumont was perturbed that the band’s latest track was "assimilated into something as annoying" as the Olympics. He continued that "’Survival’ might be amongst the most ear-scorchingly, arse-burstingly, aneurysm-inducingly brilliant songs in Muse’s canon, but it’ll forever be deemed corny by its association with one long-past sporting event."

Adam Boult of The Guardian referred to the track as "a hilarious five-minute onslaught of camp, falling somewhere between Queen, Gloria Gaynor and a Monty Python sketch. Swelling strings, battle drums, ludicrous falsetto shrieking and chugga-chugga guitar channelling the Little Engine That Could. It’s as insanely overblown as the Olympics themselves."

"Survival", bold and brilliant though it may be, is a a far cry stylistically from the opening theme of the Olympics in London. The planned pastoral scenes of verdant grasses, sheep, cattle, and rolling hills, accompanied by the hymnal call to rebuild Jerusalem on England’s "green and pleasant land" seems to be communicating a different sentiment entirely.

In light of the recent developments such as the Rockefeller Foundation Predicting 13,000 dead at London 2012 Olympics due to bombings, the Olympic sites being built atop rubbish dumps and allegedly near buried radioactive waste,
and whistleblowers reporting that security for the Olympics is completely lacking and a dangerous sham, perhaps the title, and the notion of ’survival’ is appropriate after all.

Other Muse songs with social messages and warnings: