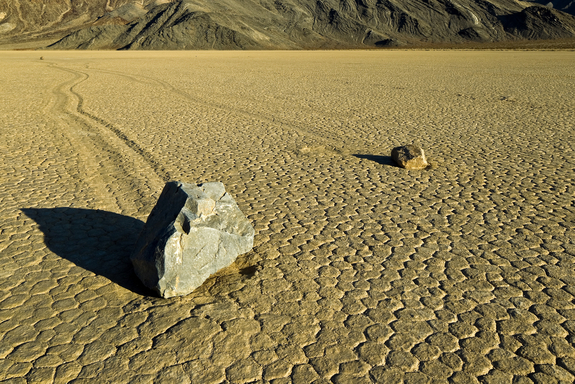 For years, scientists have been puzzled by the mysterious "sailing stones" of Death Valley.

Located in a remote area of California’s Death Valley National Park, the heavy stones appear to move across the dried lake bed known as Racetrack Playa, leaving a trail behind them in the cracked mud.

The rocks’ apparent movement has been blamed on everything from space aliens and magnetic fields to pranksters. But no one has actually seen the rocks move, which only adds to the mystery.

"It’s very quiet out there, and it’s very open — and you tend to have the playa to yourself," park ranger Alan van Valkenburg told Smithsonian.com. "And the longer you stay out there, it just takes on this incredible sense of mystery."

Scientists have tried to solve the puzzle of the sailing stones for decades. Some researchers thought that dust devils might move the rocks, some of which weigh as much as 700 lbs. (318 kilograms).

Other researchers believed the strong winds that frequently whip across the vast lake bed could cause the rocks to slide across the ground. These and other theories were eventually disproved, leaving scientists without an explanation.

In some cases the rocks’ trails were measured to be as long as 820 feet (250 meters), according to Slate.com. Some of the trails formed a graceful curve, while other trails created a straight line, then an abrupt shift to the left or right, which further baffled researchers.

From outer space to Death Valley

In 2006, Ralph Lorenz, a NASA scientist investigating weather conditions on other planets, took an interest in Death Valley. Lorenz was particularly keen on comparing the meteorological conditions of Death Valley to those near Ontario Lacus, a vast hydrocarbon lake on Titan, a moon of Saturn.

But while investigating Death Valley, he became intrigued by the enigmatic sailing stones of Racetrack Playa.

Lorenz developed a kitchen-table model — using an ordinary Tupperware container — to show how the rocks might glide across the surface of the lake bed.

"I took a small rock and put it in a piece of Tupperware, and filled it with water so there was an inch of water with a bit of the rock sticking out," Lorenz told Smithsonian.com.

After putting the container in the freezer, Lorenz ended up with a small slab of ice with a rock embedded in it.