Jul 30, 2009 Source: timesonline.co.uk
One of the great political mysteries — what was said by President Nixon during a suspicious 18-minute gap on the Watergate tapes — could soon be solved thanks to a keen-eyed amateur sleuth and modern crime-fighting technology.

The missing section of a 79-minute conversation between Mr Nixon and his Chief of Staff, H. R. “Bob” Haldeman, was erased deliberately.

It recorded a meeting on June 20, 1972, three days after operatives connected to the White House broke into the headquarters of the Democratic National Committee in the Watergate complex — a burglary that caused the scandal that destroyed Mr Nixon’s presidency. 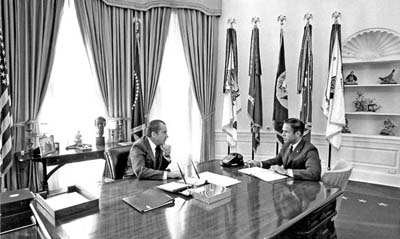 President Nixon with H R 'Bob' Haldeman, his Chief of Staff, in the Oval office

The discovery of the gap was an explosive development during the Watergate investigations, convincing many that Mr Nixon or his aides had erased that portion of the tape because it incriminated the President in a cover-up.

Once it became known that Mr Nixon had recorded meetings secretly in the White House, the President faced congressional and court subpoenas to hand the tapes over. These eventually sealed Mr Nixon’s fate, but the unexplained 18 minutes of silence has troubled historians ever since.

The US National Archives, which holds the Watergate files, has tried to fill in the blanks. In 2001 it set up a panel to see if new technology could bring back what was said on the tape, but nobody could.

An amateur Watergate sleuth, however, has convinced the archives that there could well be another way to solve the puzzle: using notes taken by Mr Haldeman at the meeting. 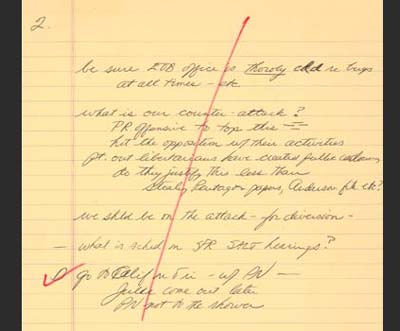 Mr Haldeman was a meticulous note taker who wrote in longhand on yellow legal notepads.

Phil Mellinger, a former analyst at the National Security Agency who has delved into the notes, reports, testimony and evidence relating to Watergate, said he had a “eureka” moment in October last year when he visited the National Archives and asked to see Mr Haldeman’s notes from the June 20 meeting.

An assistant brought them out but there were only two pages. They had four sets of holes in the top left-hand corner, suggesting that staples had been taken out and new ones inserted later.

“Wow — I suddenly realised that at the top of page two, the discussion of Watergate was ending,” Mr Mellinger told The Times, “The first page of notes went right up to the time they started discussing Watergate. I believe page two was about the last minute of the 18-minute discussion.”

Mr Mellinger believes that in 1973, when the Watergate scandal began heating up, Mr Haldeman destroyed the pages that covered the gap in the tape, then restapled the remainder.

The notes were subpoenaed in 1974 and retrieved from a White House safe to which only Mr Haldeman had the combination.

Yet nobody noticed that he provided only two pages of notes from the 79-minute conversation. It is unlikely that he sat through a large part of the meeting without taking notes.

Mr Mellinger has convinced the archives to subject the existing notes to electrostatic detection analysis, which can capture indentations on paper. The hope is that what was written on the allegedly missing pages can be recreated.

Mr Haldeman usually wrote in felt tip pen but on this day he used a ballpoint, greatly improving the chances of success. “I’m pretty confident this will work,” Mr Mellinger said.

During the Watergate hearings Mr Nixon’s secretary, Rose Mary Woods, said she had mistakenly erased five minutes of the tape when she answered a telephone behind her left shoulder, causing her foot to slip to the transcription record pedal.

When asked to recreate this, the contortion involved looked so improbable that it became referred to jokingly as the “Rose Mary Stretch”.

Nixon was finally brought down by another recording, the “smoking gun tape”, dated June 23, 1972.

In it he can be heard agreeing that the FBI should be called off investigating the Watergate burglary — clear evidence that he was ordering a cover-up. He resigned on August 9, 1974.

— Bill Clinton’s bid for the presidency nearly failed in 1992 when a former lover, Gennifer Flowers, released tape recordings of intimate conversations with him

— The world was given an insight into Tony Blair and George Bush’s working relationship in 2006 when a microphone picked up their conversation about the Israeli offensive in Lebanon. “Yo Blair,” Mr Bush said, speaking through a mouthful of bread

— In 1984 Ronald Reagan did not realise a radio microphone was on when he joked about Russia: “My fellow Americans . . . The bombing will begin in five minutes”