"The whistle-blowing website Wikileaks has begun releasing sensational information on the multi billion dollar global spying industry. The database contains hundreds of documents shining a light on the methods being used by secret services all over the world. Here’s the video of Wikileaks founder Julian Assange speaking to journalists and students at a press conference at City University London in central London on December 1, 2011. Along with a number of other guest speakers, Mr Assange spoke of the Wikileaks ongoing investigation of surveillance software companies and their alleged use by governments around the world."

"The whistleblowing website Wikileaks has begun releasing sensational information on the multi billion dollar global spying industry. The database contains hundreds of documents shining a light on the methods being used by secret services all over the world."

WikiLeaks founder Julian Assange launched the website’s new project Thursday, the publication of files it claims shows a global industry that gives dictatorships tools to spy on their citizens. 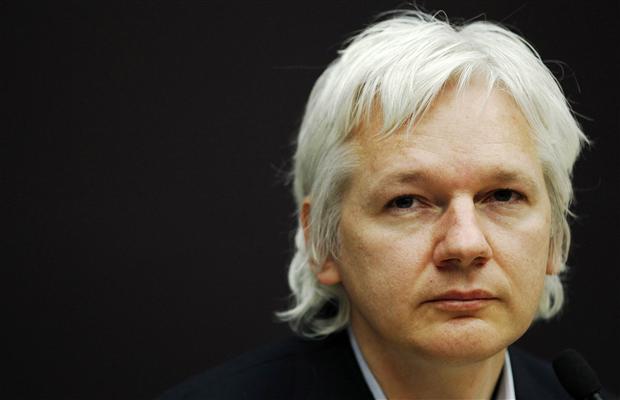 It had already been revealed that the electronics firm, Amesys, had worked with the Libyan regime -- and French rights groups are attempting to take the group to court -- but Owni’s files will prove embarrassing.

They appear to show that a manual provided to Libya to operate a "massive Internet surveillance" set-up known as the Eagle system included the email addresses and pseudonyms of opposition leaders.

One of them, 74-year-old writer Mahmud Al-Naku, campaigned against Kadhafi in exile and has now been named his country’s ambassador to London by the victorious new former rebel government.

Another figure on the surveillance list was Atia Lawgali, 60, who has since been named Libya’s new minister of culture. Several more Libyan and western figures are on the list, contained in a leaked screenshot.
Kadhafi’s regime has been accused of sending agents to harass and even kill opposition figures in exile.

Owni also published the user manual provided to the Libyans to operate their Internet spying system, which it boasts can intercept emails and webmail, VOIP calls, instant messages and search engine requests.

Contacted by AFP, Amesys said that Libya had been under no trade embargo after 2003, and that a number of French and international companies had done business with Kadhafi’s government.

"Amesys delivered the Libyan authorities equipment and had no control over the use to which it was put," said the firm, which was bought by the French electronic group Bull in 2010.

The International Federation for Human Rights (FIDH) has lodged a legal complaint over Amesys’ contract with Libya in a French court, alleging complicity in rights abuses.

The Wikileaks files reveal the activities of about 160 companies in 25 countries which develop technologies to allow the tracking and monitoring of individuals by their mobile phones, email and Internet browsing histories.

"Today we release over 287 files documenting the reality of the international mass surveillance industry -- an industry which now sells equipment to dictators and democracies alike in order to intercept entire populations," Assange told reporters in London.

He said that in the last 10 years it had grown from a covert industry which primarily supplied government intelligence agencies such as the NSA in the United States and Britain’s GCHQ, to a huge transnational business.

Assange has been in Britain for the past year fighting extradition to Sweden for questioning on allegations of rape and sexual assault, living under tight bail conditions. His case is due to come up again on Monday.

The documents on the website, http://wikileaks.org/the-spyfiles.html , include manuals for surveillance products sold to repressive Arab regimes.
They have come to light in part from offices ransacked during uprisings in countries such as Egypt and Libya earlier this year, as well as investigative work by WikiLeaks and its media and campaigning partners.

"These systems that are revealed in these documents show exactly the kind of systems that the Stasi (East Germany’s secret police) wished they could have built," said Jacob Appelbaum, a former WikiLeaks spokesman and computer expert at the University of Washington.

"These systems have been sold by Western companies to places for example like Syria, and Libya and Tunisia and Egypt. These systems are used to hunt people down and to murder."

Ed Note: The Wikileaks.org website was down after the press conference. It is now available.

WikiLeaks Twitter: "WikiLeaks.org is blocked following #SpyFiles release. We are investigating cause, but it isn’t a capacity issue."