A mysterious ball of light seen across eastern Australia early yesterday may be linked to the launch of a private spacecraft in the US, experts say.

The Falcon 9 rocket was successfully launched from the Kennedy Space Centre in Florida soon before people in Queensland, New South Wales, the ACT and Victoria started reporting a UFO.

The UFO's speed, estimated at 20,000km/h, and west-to-east direction were consistent with a spent rocket grazing the earth's upper atmosphere, said Dr Peter Firth from the Sir Thomas Brisbane Planetarium.

"This is the first time they've launched this kind of rocket, so we don't really have any experience of what we should expect to see," Dr Firth said.

"Another possibility is a natural object like a meteoroid, or small rock, coming from space.

"Or there's always the long shot that it could have been the aliens. We usually treat that one as the least likely." A spiral shape spotted around the UFO was probably caused by light reflecting off water vapour in the upper atmosphere, he said.

Experts from NASA and other agencies will provide more answers as new images of the object emerge. The Falcon 9, which is owned by the SpaceX firm and could one day carry astronauts, blasted off at 4.45am (Brisbane time) on its maiden test flight.

Early risers inundated The Sunday Mail, radio stations, the police and even search and rescue services with reports of an object shooting across the sky about 5.45am.

Officials at agencies from the weather bureau to the Defence Department could offer no explanation.

UFO Research Queensland spokesman Pino Pezzimenti said it was "extremely unusual" for a UFO to be seen over such a wide area and for such a long time.

Witnesses were quick to compare the light with a similar recent sighting in Norway.

Senior Sergeant John Garner was attempting to rescue his cat from his roof at Ferny Hills in Brisbane's north when the UFO soared across the sky.

"The light was very unusual in that it consisted of a central light surrounded by a spiral anti-clockwise halo," he said. "The speed and direction remained constant during the flyover, perhaps 40 seconds in duration."

Ben Harris – who has written magazine articles on UFOs – had just taken his wife to work at Taigum in Brisbane's north when he saw the light and took 18 photographs with his mobile phone camera.

"It's absolutely freaky. I believe I'm a good sceptical person and if you ask me what it is, I'll honestly tell you I don't know," he said.

Sam Carlow, 12, who has a keen interest in astronomy, had the experience of a lifetime when his father spotted the light from their home at Wakerley in Brisbane's east.

"It was a pretty intense light," he said. "It looked like bits breaking off so it could be space junk or an ice comet or anything really, but it looked nothing like a plane."

Jeff Hannah, from Redcliffe, was out jogging with friends when he saw the "perfect spiral of light".

"I realised soon it was not the moon but that it was shooting like a comet from the southern sky and off into the northwest," he said.

Another witness, who wanted to be known only as Tom, reported seeing the light while driving near Wondai, 240km northwest of Brisbane.

A police spokeswoman said: "We have received calls from the Gold Coast, Brisbane and the Sunshine Coast."

Despite the truth of Queensland's brush with a UFO being based a little closer to home, residents of Woomera in South Australia are preparing for the arrival of their own visitor from outer space late tonight.

The Japanese space capsule Hayabusa – about the size of a basketball – is set to touch down in outback South Australia, becoming the first spacecraft to bring back material from an asteroid.

Hayabusa is hobbling home after a seven-year mission.

People across New South Wales, Queensland and the ACT say they were startled this morning by a huge white light moving across the sky.

Canberra resident James Butcher says he was driving home from a night out with his brother when they spotted the "strange spiral light in the sky".

"It had a distinct bright centre, much like a bright star, indicating an object shedding light trails, spiralling and fattening out from it," he said.

"The effect lasted only two or three minutes, moving and descending quickly out of view.

"The colour was yellowish but this may have been blurred and tinted by the morning fog."

Wollongong man Eddie Wise says he also saw the light during his morning walk just before 6:00am.

He says he has never seen anything like it.

"It was like a yellowish, greenish light with a light spiral around it," he said.

"It sort of moved around, bobbed up and down and then it went behind a cloud.

A caller to the ABC, Robyn, says she saw the phenomenon from her home on Sydney's north shore just before 6:00am.

She says it was over within two minutes.

"There was this white light up in the sky like a huge revolving moon," Robyn said.

"At first I thought it was the moon but it was travelling so fast, high up above the eastern horizon and twirling as it went.

"It was just amazing and to be quite frank, I was quite frightened and my heart's still pounding."

A number of people from Morayfield and Caboolture in Queensland have reported that they too saw a white light in the sky about 5:50am.

"It was just the one light. I just came home from my walk and I happened to look up in the sky, and here it was racing across the sky," Linda told 612 ABC Brisbane.

"I bashed on the window for my husband to have a look and he flew out.

Linda described the light as like a lollipop swirl.

She says the light came from the west and was headed east, out to sea.

"It was just unreal. There was a cloud in the sky - just this light with a swirl in the middle," she said.

Peter, from Balmoral, says he saw the light while he was on a ferry terminal on the Brisbane River.

"It certainly had that lollipop-type swirl ... but it was travelling low and fairly fast, and as it went past me and I looked up, it looked like a row of lights, maybe four lights," he said.

Denise, at Pine Mountain, told ABC radio in Brisbane that she saw the lights shortly before 6:00am.

"I got up at about 5:45 to let my horse out of his stable ... and I saw this coming from a north-west direction towards the south-east," she said.

"There was no noise. It was like bands of ribbon coming out of it and it looked like it was coming through a cloud, yet there were no clouds."

An astronomer says space junk or meteors are the most likely explanations for the UFO sightings. 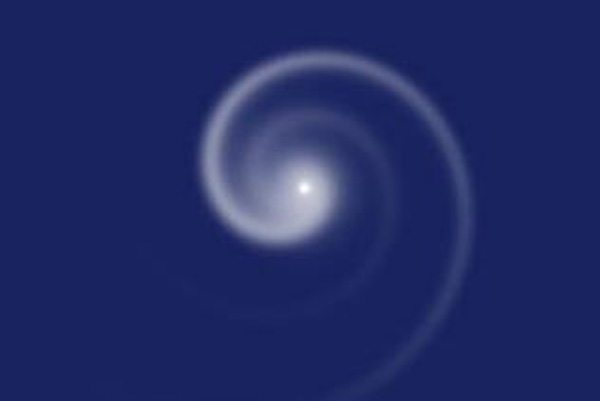 Artist's Impression: A reader from Brisbane's northwestern suburbs - who is also a forensic artist - prepared this approximation of the light pattern he saw in the sky just before 6am on Saturday. His report is one of many being made today after the bright light was seen from many suburbs up and down the southeast Queensland coast. Source: The Courier-Mail

Sightings have been reported throughout the state's southeast of a mysterious light travelling in an erratic fashion across the sky in the early morning hours.

Witnesses reported watching a ball of light move across the sky for up to five minutes at about 5.50am on Saturday.

"It was a perfect spiral of light," one Redcliffe witness told The Sunday Mail.

"I realised soon it was not the moon but that it was shooting like a comet from the southern sky and off into the northwest."

Another Brisbane resident said: "There was absolutely no sound in a perfectly clear, darkened sky before dawn."

Police and search and rescue crews confirmed they had received calls from Brisbane, the Gold Coast and Sunshine Coast about the UFO.

The weather bureau said there were no weather conditions which would explain the light. A Defence spokeswoman also said she had no explanation.