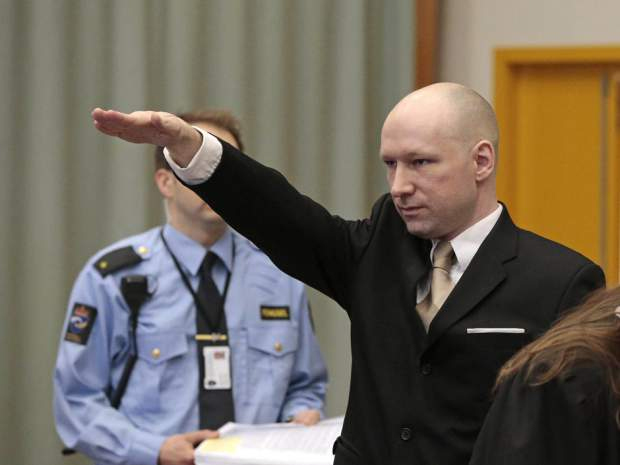 Anders Behring Breivik gestures as he enters a courtroom in Skien, Norway, on Tuesday, March 15, 2016.

Mass killer Anders Behring Breivik kicked off his return to court by making a Nazi salute Tuesday during his bid to improve conditions inside the Norwegian prison where he is being held in isolation for massacring 77 people in bomb-and-gun attacks.

Appearing in the public eye for the first time since his conviction nearly four years ago, the 37-year-old Norwegian and his lawyers are trying to convince a judge that his prison conditions are “inhuman” and violate the European Convention on Human Rights.

The government has rejected his claims, saying he is being treated humanely and with dignity despite the severity of his crimes.

With a dark suit and a shaved head, Breivik was led into the gym-turned-courtroom in Skien prison, where the trial is being held for security reasons.

Lise Aserud, NTB scanpix via APAnders Behring Breivik has his handcuffs removed after entering the courtroom in Skien, Norway, on Tuesday, March 15, 2016. 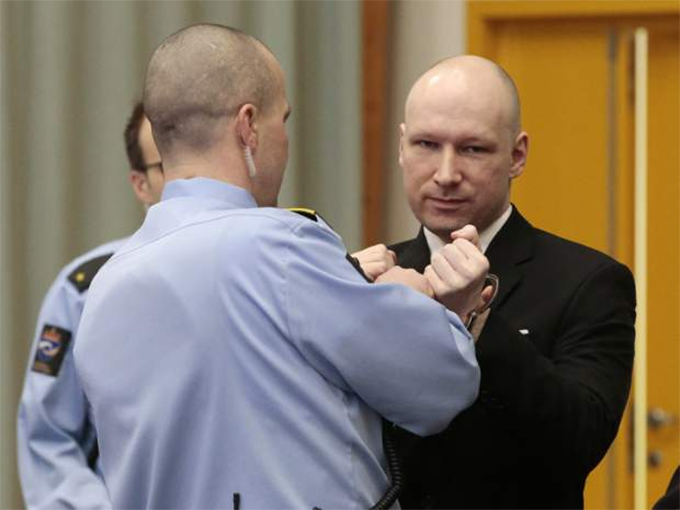 Anders Behring Breivik has his handcuffs removed after entering the courtroom in Skien, Norway, on Tuesday, March 15, 2016.

After prison guards removed his handcuffs, Breivik turned to journalists covering the hearing and stretched out his right arm in a Nazi salute. Stone-faced, he remained there for a few seconds as guards stood idle and his lawyer Oystein Storrvik nervously took a sip of water.

Many survivors and families of victims are trying to ignore the trial, fearing it could reopen emotional wounds and give Breivik more attention. Still, some watched a retransmission of the proceedings from a courthouse in Oslo.

“It’s pathetic. It’s a farce,” said Lisbeth Royneland, whose 18-year-old daughter, Synne, was killed in Breivik’s shooting massacre on Utoya island. She now heads a support group for survivors and the bereaved.

In violence that stunned Norway on July 22, 2011, Breivik set off a bomb in Oslo’s government district and then carried out a shooting massacre at the annual summer camp of the left-wing Labor Party’s youth organization on Utoya.

He was sentenced to 21 years in prison, the maximum under Norwegian law, but his term can be extended as long as he’s considered a danger to society. Even his lawyer said Tuesday that means Breivik is likely to be imprisoned for the rest of his life.

During his criminal trial four years ago, Breivik entered the court with his own salute, using a clenched fist instead of the outstretched hand that the Nazis used to greet Adolf Hitler. At the time Breivik described himself as a modern-day crusader, fighting to protect Norway and Europe from Muslim immigration.

In letters sent to media from prison, Breivik said he has abandoned his armed struggle and now wants to create a fascist movement while serving his sentence.

Before the hearing started Tuesday, Storrvik said the goal of the case was to improve Breivik’s prison conditions, including allowing to him to interact with other prisoners and removing some restrictions on his mail correspondence.

“That is what we want because the conditions are hard now,” Storrvik told The Associated Press.

Breivik is the only inmate in a high-security wing of Skien prison, 100 kilometres southwest of Oslo. He is allowed some mail correspondence but it is strictly controlled and he’s not allowed to communicate with other right-wing extremists.

He is a citizen of Norway and even though he is convicted for a horrible crime, he hasn’t lost his human rights

The government says the restrictions are well within the European Convention of Human Rights and are needed to make sure Breivik isn’t able to build militant extremist networks from prison.

“The plaintiff has not shown any sign of remorse,” government attorney Marius Emberland said in his opening remarks. “Breivik is a very dangerous man.”
Breivik shook his head as Emberland spoke.

Norwegian authorities, known for their humanitarian approach to criminal justice, stress that Breivik has the same rights as any other inmate to challenge his imprisonment conditions.

“He is a citizen of Norway and even though he is convicted for a horrible crime, he hasn’t lost his human rights,” said Ina Stromstad, a judge serving as a spokeswoman for the Olso district court.

Breivik is to address the court on Wednesday. Both sides will call witnesses to testify before closing arguments on Friday. The judgment is expected about a month later.