Now the French Must Prove They're French 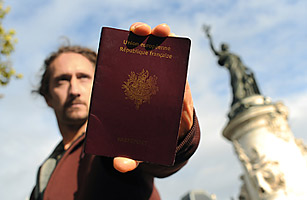 Like his father before him, French publisher, author and political commentator Eric Naulleau was born into a military family assigned to a temporary foreign posting. But because his birth happened abroad, where his father — himself born in Lebanon to a French army father — was serving France's national interests, Naulleau has had to wage a long and surreal battle with the government to prove that he's actually a French citizen. Naulleau is just one of a growing number of French people born outside France or in the country to foreign parents who are now being told they must present documents supporting their nationality if they want to keep it.

"What a lot of people don't realize is that with the increasingly strict obligation to prove your citizenship, you can walk into a state administration today to have your ID or passport renewed, and walk out virtually a stateless person," says Naulleau, 48, whose family had been posted to Baden-Baden, Germany — about 30 miles from the French border — when he was born in 1961. "The situation is creating a two-class system of citizenship in which French nationals born abroad or to foreign parents are treated as inferior, and forced to prove their worthiness of being French more than others."

Why is this happening? For years, applicants for new passports and ID cards relied on their expiring documents to prove their identities and French nationality. But in the mid-1990s, the country started strengthening the verification requirements on suspicions that significant numbers of foreigners had made bogus claims of citizenship to obtain French passports. In the past few years, the rules have become even more stringent. According to the Justice Ministry, about 18,000 people, or 12% of all those who tried to renew their passports or ID cards, were rebuffed in 2007 because they didn't have irrefutable proof of nationality — up from 8,000 people, or 5%, in 2002.

Authorities say they are merely making necessary updates to the nationality verification process — not an illogical move, they note, in a world where terrorism and identity theft has become more commonplace. Perhaps, detractors say, but those French citizens born overseas or in France to foreign-born parents are facing a trial that their peers are not. While the latter group can often rely on the French state to check official records to prove their citizenship, people born in former French colonies to naturalized immigrant parents or to French families abroad are being subjected to a paper chase that often leads to dead ends. Many fear they may lose their French nationality altogether.

Concern has reached such a level that the French media are now sounding alarm bells. The daily Libération, for instance, ran a story on the issue Monday under the headline: "The French People That France Rejects." Some reports have detailed the incredible lengths that these "rejects" have had to go through to obtain the required certificates of nationality for themselves, their parents and, at times, their grandparents.
Take England-born Sophie Giraud, a 39-year-old marketing executive in Lyon, for instance. French officials insisted that she obtain official birth certificates for several family members, which they said the government should accept as proof of their citizenship — and, by extension, hers. "I had my expired passport, my identity card and proof of my parents' nationality before their eyes, and they didn't hesitate to become more absurd by asking for proof of my grandparents' citizenship," says Giraud, who had planned a trip abroad and ended up obtaining a British passport by mail in a week. "Why isn't it their responsibility to prove my earlier passport and ID weren't obtained by fraud since the same administration asking for proof of citizenship now provided them?" Naulleau ultimately beat the system by requesting French citizenship through his naturalized, Bulgaria-born wife. But this isn't an option that is open to most people.

Many pundits have denounced the dramatic stiffening of rules, saying it has coincided with the conservative-led government's recent obsession with immigration, the place of Islam in French society and the current state of French national identity. Critics argue that conservatives are trying to stoke nationalist sentiment to gain the support of right-wing voters. "In recent years, France has stopped its offensive of exporting its universal values globally, and shrunk into a defensive position that views everything outside it as threatening and corrupting," Naulleau says. "That now even includes most foreign-born French people, though clearly not the big shots like [former president] Valéry Giscard d'Estaing, who hasn't faced the same problems I have despite having been born in Germany, too."