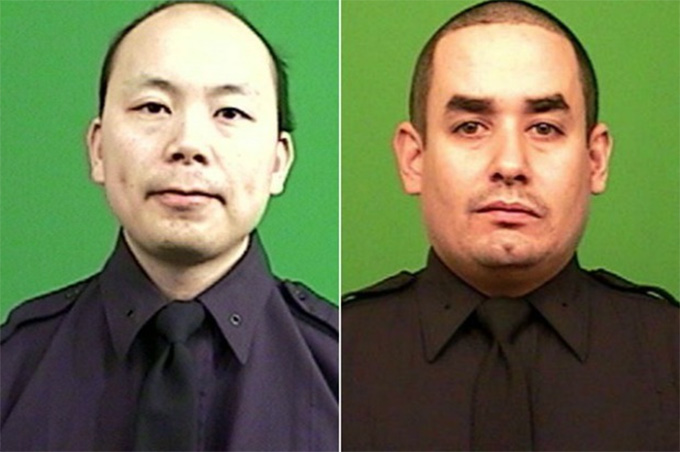 On Saturday afternoon, Black Brooklynite Ismaaiyl Brinsley ambushed two NYPD police officers and shot them both to death while they were sitting in their patrol car. According to early reports, there was “no warning” and “no provocation.” Brinsley simply approached the vehicle and “unloaded” on the two officers sitting inside. Hours before the assassination, he had announced his intent to kill on Instagram, posting pictures of his pistol alongside promises to kill “pigs” and some related hashtags: #ShootThePolice, #RIPErivGarner [sic], and #RIPMikeBrown. Shortly after the double murder, he posted one last time to Instagram (this time showing a picture of his blood-stained pant leg) and then committed suicide.

The #ICantBreathe revenge shooter used the hashtag #ShootThePolice, along with two other hashtags believed to be #EricGarner and #HandsUpDontShoot (in support of Michael Brown). He posted the following comments on social media prior to the double murder-suicide:

“They Take 1 Of Ours…Let’s Take 2 of Theirs,” the post continued, signing off with, “This May Be My Final Post.”

“Brinsley had belonged to the gang called Black Guerilla Family, and he boasted about wanting to kill cops. The gang reportedly wanted to get retribution for the police killings of Michael Brown of Ferguson, Missouri, and Eric Garner, of New York City, who died after being placed in a chokehold by a police officer, by killing cops.”

Most of the responses to these killings have been predictable. Law enforcement in New York and elsewhere took to social media to express their anger. Many Americans likewise messaged their sympathy for the dead. And prominent progressives such as Al Sharpton and Bill de Blasio began backpedaling. Just days prior, these latter two gentlemen were expressing solidarity with protesters calling for dead cops in the streets of New York. Their feigned dismay when such killings materialized is further evidence of their con-artist hypocrisy, but it’s predictable nonetheless.

There is plenty to be said about these killings, which seem likely to remove any last pretense of moral legitimacy from the wave of protests that the justifiable shooting of Mike Brown sparked in August. But it’s worth pointing out just how profound the hypocrisy of the social justice Left actually is in this moment.

The aim of the Left since day one of Ferguson has been to make the typical police officer into some kind of monster. The emphasis is constantly on the spurious innocence of the Blacks and the equally spurious predatory aggression of law enforcement. Police murder Blacks because of racism. They murder blacks because they are cogs in a giant, white-supremacist machine that crushes minorities by design. And that’s just the rhetoric of the established progressives. The rhetoric they’ve tolerated from the “I Can’t Breathe” protesters is more vicious and hyperbolic still. Cops are baby killers. Cops are Nazis. Cops are the KKK. The sensationalism, the ludicrousness of this police-as-monster caricature would actually be hilarious if it didn’t have such serious consequences.

Because ultimately how do you deal with a monster? Peaceful protest? Polite dissent?

No, of course not. What you do with a monster is you slay it. And so as that message trickles down to already violent subcultures like the gangbangers of Brooklyn, NY, figures like Brinsley take it seriously and act accordingly. They lash out against what the professional moralizers of the national media tell them is a real and present and existential threat. They shoot back. And then suddenly everyone who was agitating for revolution, for backlash, for outright violence against the police for months pretends that they have no idea where such horrific acts might be coming from. It’s a sorry scene. And former NYPD commissioner Bernie Kerik is right to accuse Sharpton, de Blasio, et al of having “blood on their hands.”

Law enforcement in America, like any of our governing institutions, is in need of real reform. There are ways in which it is too politicized. There are ways in which it is too bureacratized. And it is often conducted at a scale that makes high-trust relationships with any policed community difficult, if not impossible. But American law enforcement is emphatically not a conglomeration of racist devils on the look out for Blacks to prey upon. And the more time, energy, and proposed solutions are wasted upon that blatant misdiagnosis, the harder it becomes to resolve any real ills.

And the easier it becomes to justify acts of real violence in a war against imaginary monsters.