The U.S. cemented its ties to Israel by opening a new embassy in Jerusalem, as clashes between Palestinian protesters and Israel’s military left dozens dead and added to the Trump administration’s challenges in the Middle East.

Some 50 miles away, Israeli military used warplanes to hit targets belonging to Gaza rulers Hamas and fired live ammunition, tear gas and rubber bullets at Palestinian protesters as many of them attempted to breach the fence dividing the Gaza Strip with Israel. 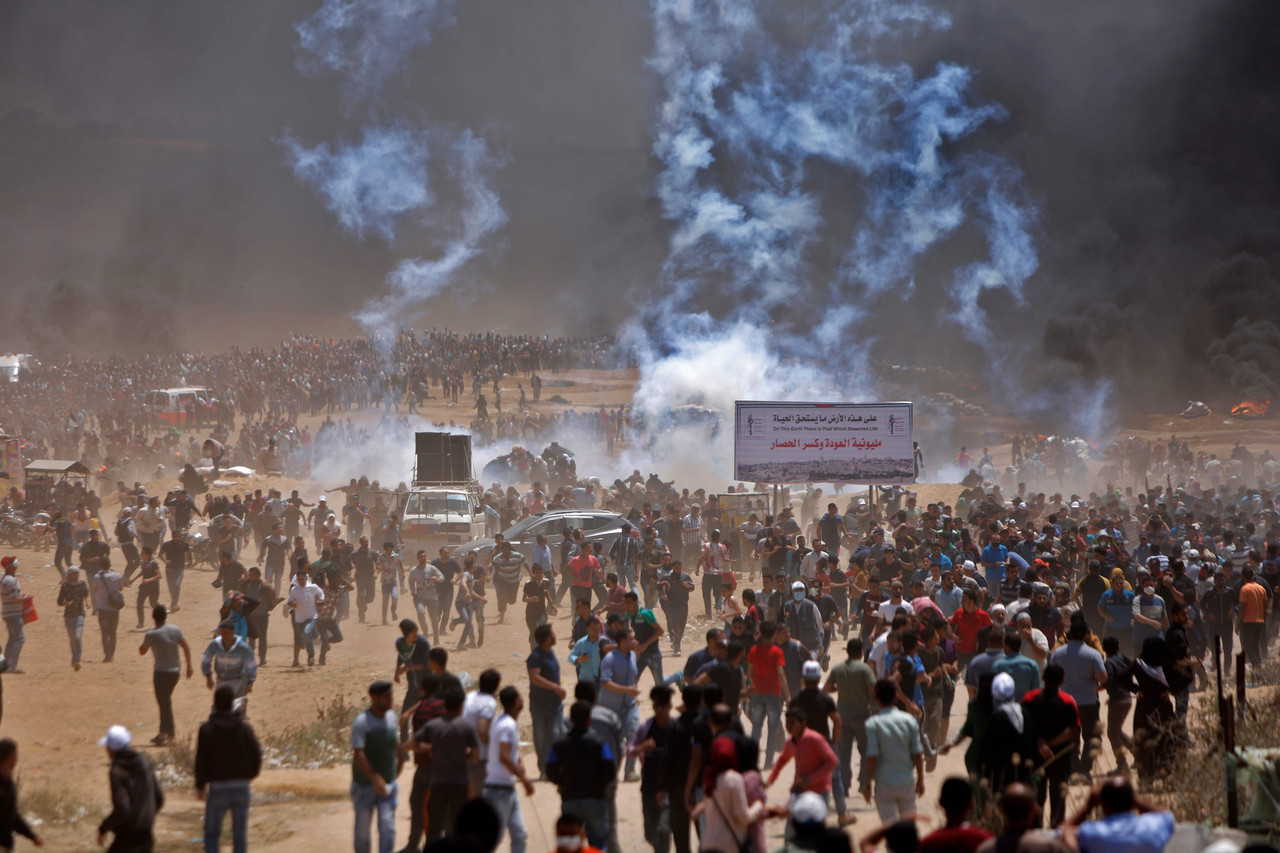 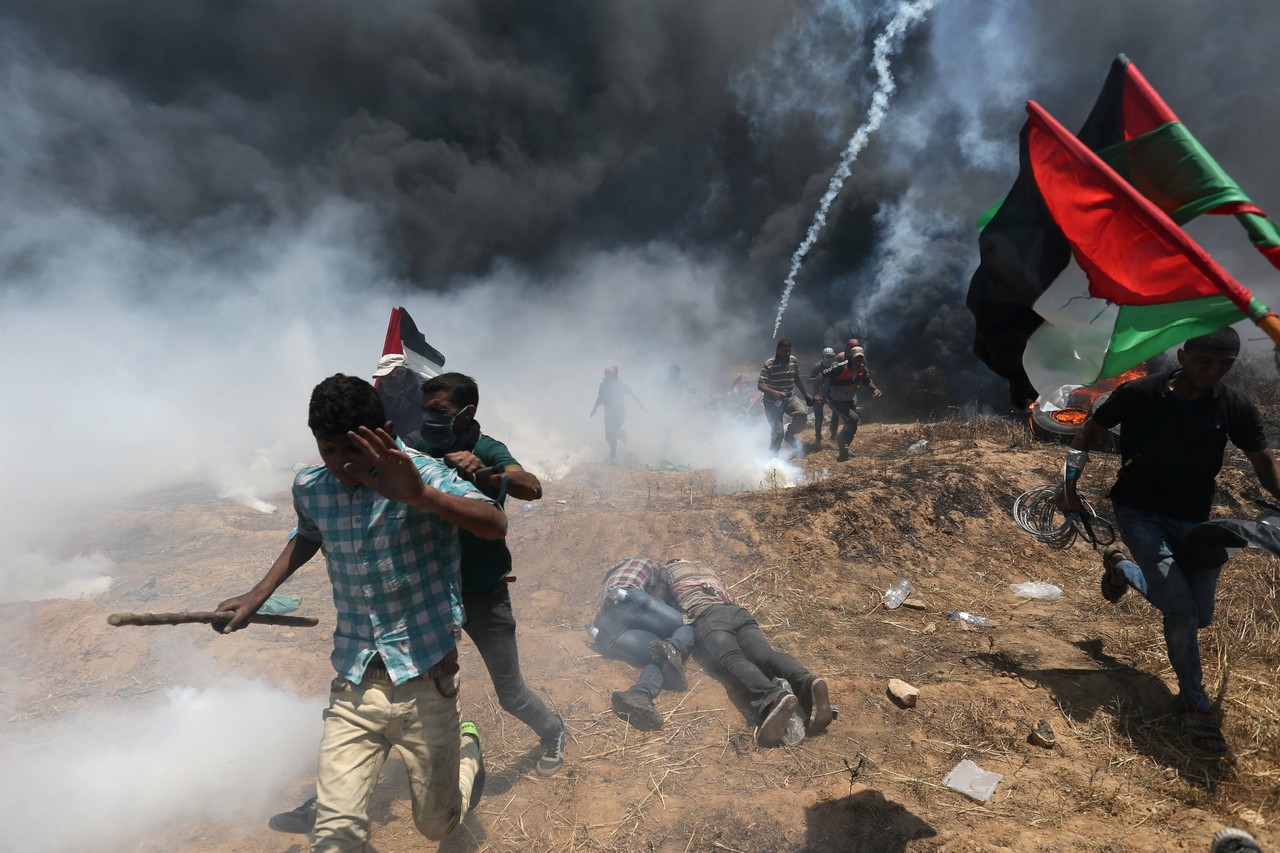 Gaza officials said 52 protesters were killed—among them a 12- and a 14-year-old—and more than 2,400 were injured. That marked the largest single-day death toll since the Israeli army fought a conflict with Hamas in 2014. 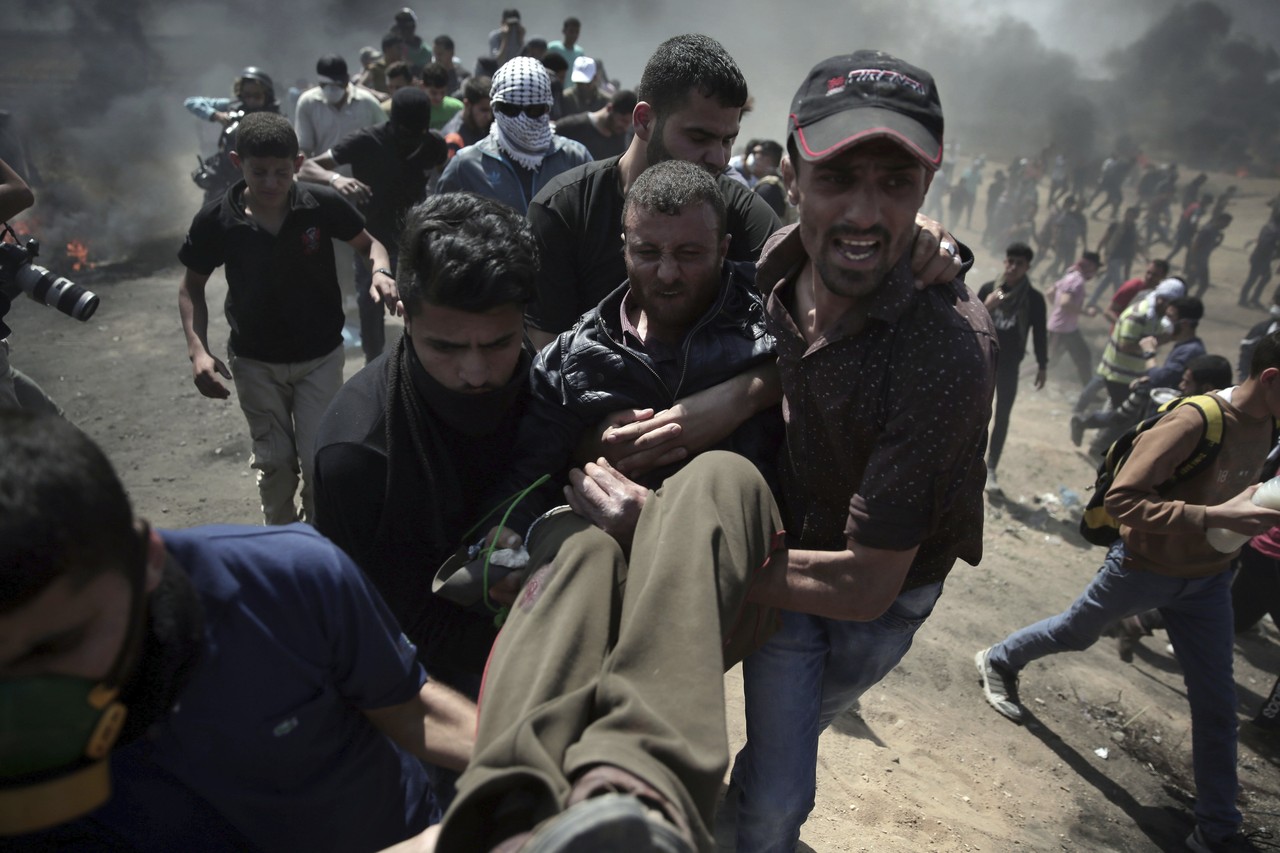 The unrest followed months of tension over President Donald Trump’s decision to move the U.S. Embassy to Jerusalem from Tel Aviv, where it has resided since soon after Israel’s 1948 founding. It coincided with a host of anniversaries that Hamas has used to rally support for its cause. The U.S. Embassy opening in Jerusalem—in a city that Palestinians also claim for a future capital—offered a focal point for their anger. 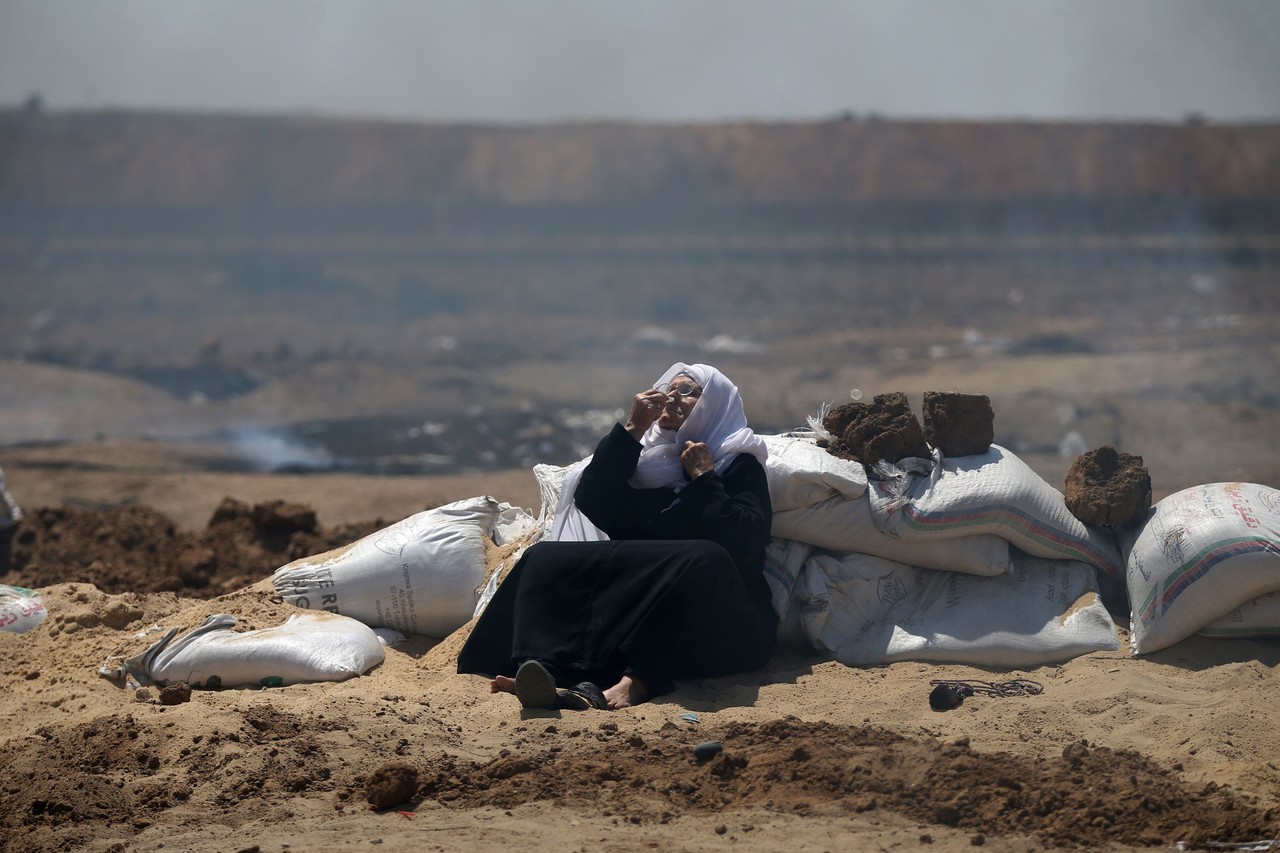 An Israeli military spokesman said Monday that the demonstrations by 40,000 Gazans were larger and more violent than those of the past month and a half of protests on the strip. 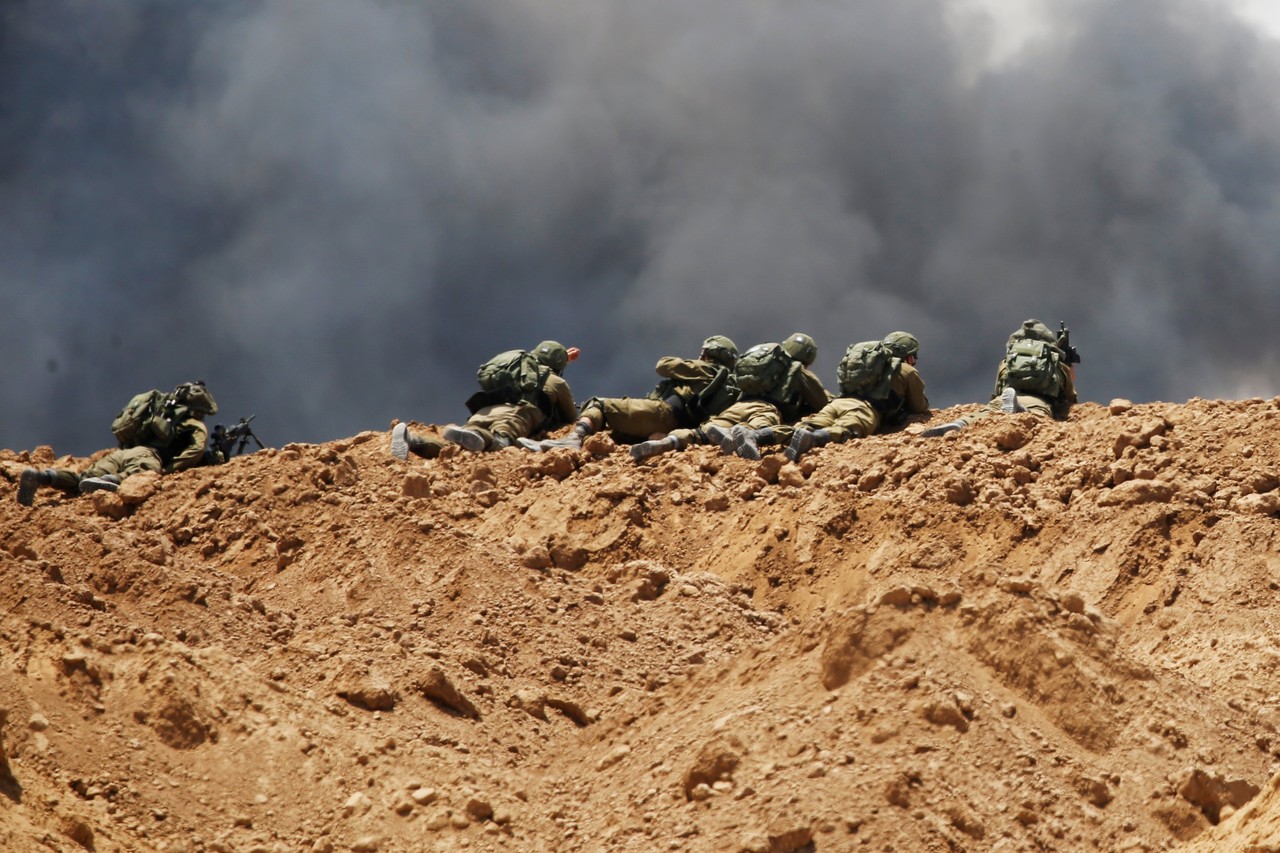 In the runup to the U.S. Embassy opening, Hamas has helped organize weekly protests and threatened to break through the fence dividing the strip with Israel. Fearing a mass infiltration of Israeli territory, Israel has responded with live fire, killing about 100 people since March 30.

Palestinian and Arab leaders had warned the U.S. against moving the embassy and said it would hurt peace efforts. “It has raised the volume of anti-American rhetoric,” said Prince Turki al-Faisal, a senior member of the Saudi royal family and former head of Saudi intelligence, in remarks to CNBC on Monday. “It’s not a step that will bring peace to Palestine or to the Middle East.”

The Palestinian deaths have ratcheted up the region’s already-high tensions, in part triggered by the Trump administration’s decision last week to pull the U.S. out of a multilateral nuclear accord with Iran. 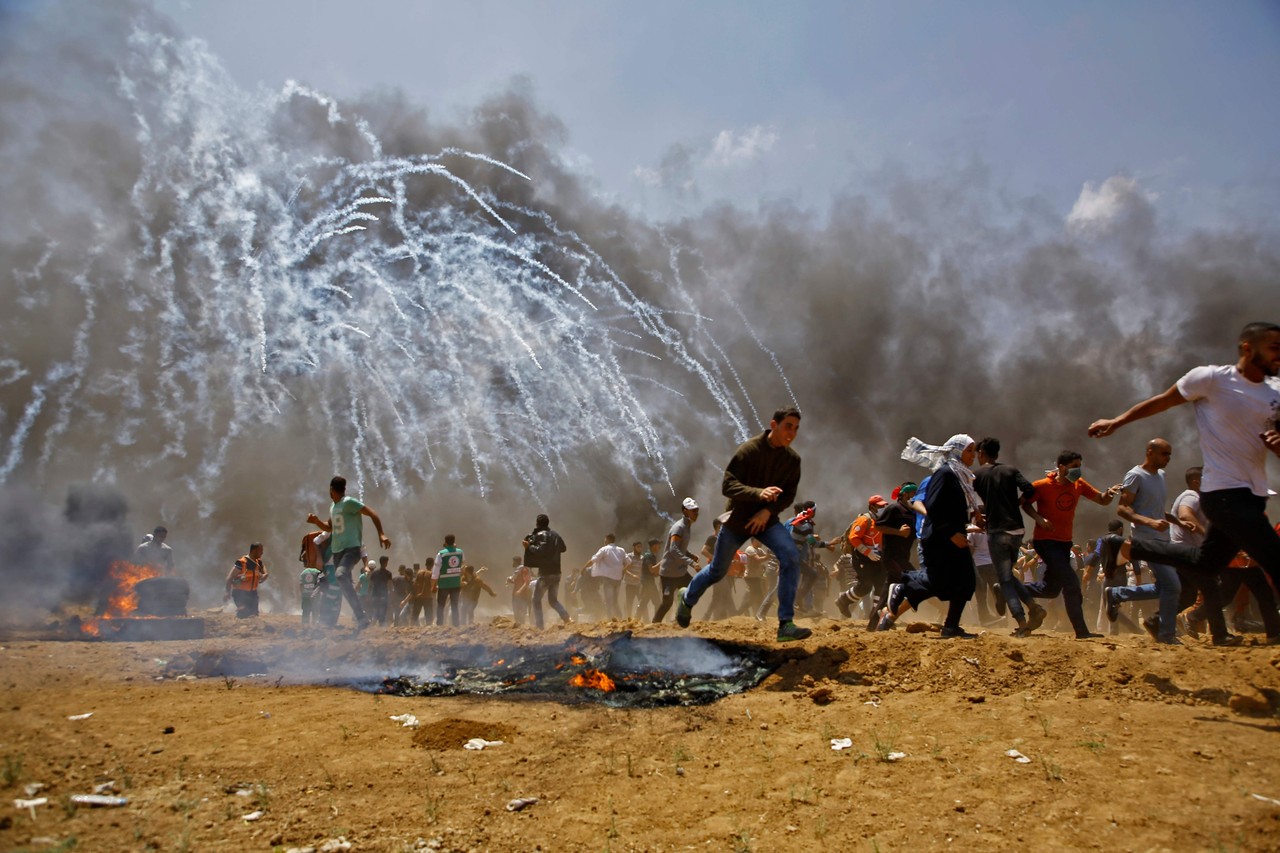 Ali Larijani, the speaker of Iran’s parliament, on Monday called Mr. Trump “feebleminded” and incapable of long-term decision-making. He indicated that a response to the U.S. Embassy move and its recent withdrawal from the Iran nuclear deal was forthcoming.

“The U.S. and the Zionist regime shouldn’t assume that their actions regarding the Iran nuclear issue and Palestine will remain unanswered,” he said, according to the official Islamic Republic News Agency. He didn’t elaborate on what that response would be.

Israel accused Iran of firing rockets at the Israeli-controlled Golan Heights and in response mounted a wave of airstrikes against Iranian targets in Syria, putting the two sides on the brink of direct conflict.

Israel is working to thwart Iran’s military buildup inside Syria on its southern border and has targeted Iranian positions with a series of missile strikes. Tensions are also rising between Israel and Hezbollah, an Iran-backed Lebanese militia that has also become a political force in neighboring Lebanon.

As violence raged on Monday, the U.S. said it had sent members of the Marine Corps—fewer than two dozen of them—to provide additional protection of U.S. embassies in Israel, Jordan and Turkey, a U.S. defense official said. 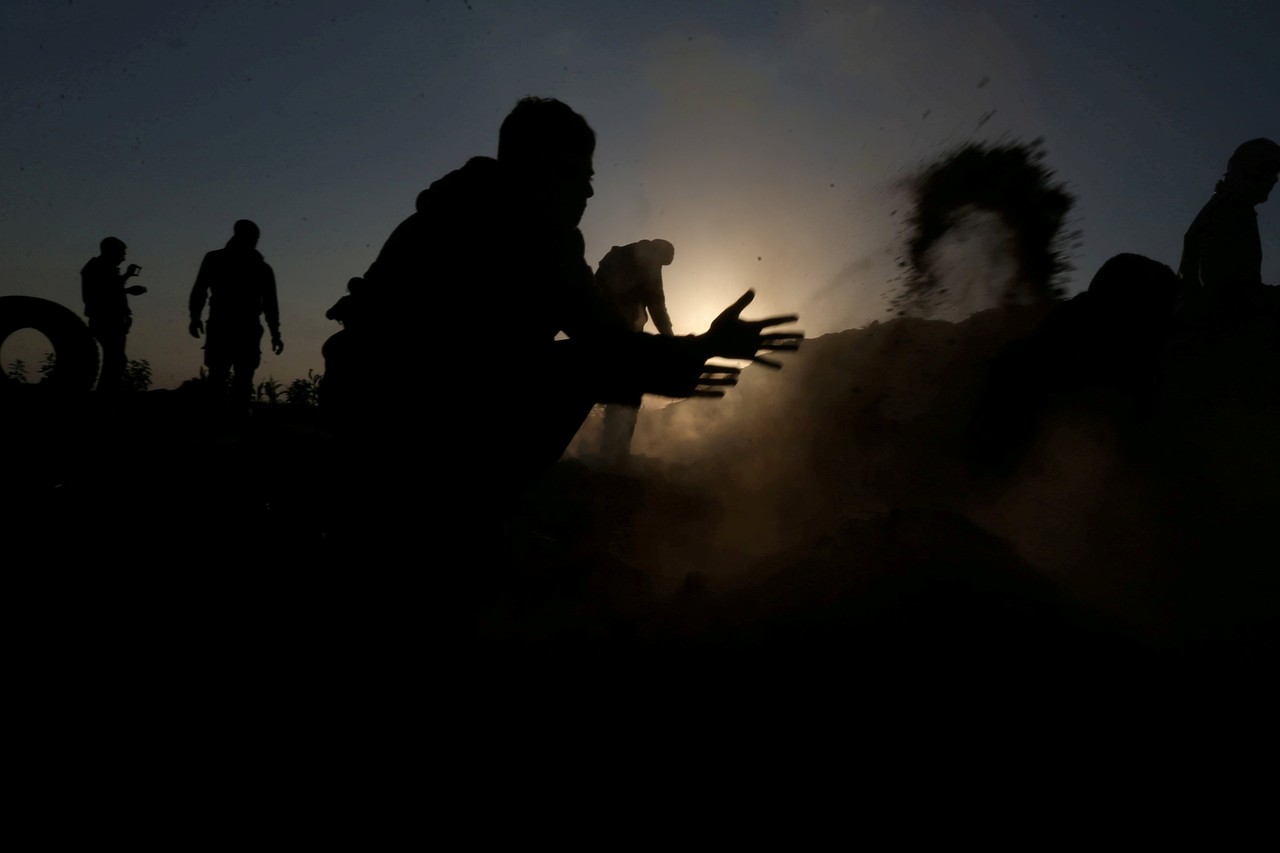 Among many Israelis, the U.S. Embassy move was seen as a welcome triumph amid the regional trouble. For years, Israeli leaders have lobbied the international community to move embassies to the contested city. Israel’s parliament, the Knesset, and much of its government are in Jerusalem. Guatemala and Paraguay said they would also open embassies in Jerusalem.

The international community doesn’t recognize Jerusalem as Israel’s capital, but U.S. officials have said doing so reflects the reality on the ground. Mr. Trump, whose team is working on an Israeli-Palestinian peace plan, had said the move would take the divisive issue of Jerusalem “off the table.”

The U.S. Congress in 1995 passed a law stating that the U.S. Embassy should be based in Jerusalem. But a clause in the legislation allowed the U.S. president to delay the move every six months by signing a waiver.

The Hamas-orchestrated protests in Gaza ensured that Jerusalem’s sovereignty will remain central to the issues that need to be addressed in any Middle East peace plan, said Aaron David Miller, a former U.S. peace negotiator.

“Jerusalem is not off the table,” he said. “For any prospects or hopes for a peace process,” Mr. Miller added, “it is the table now.” 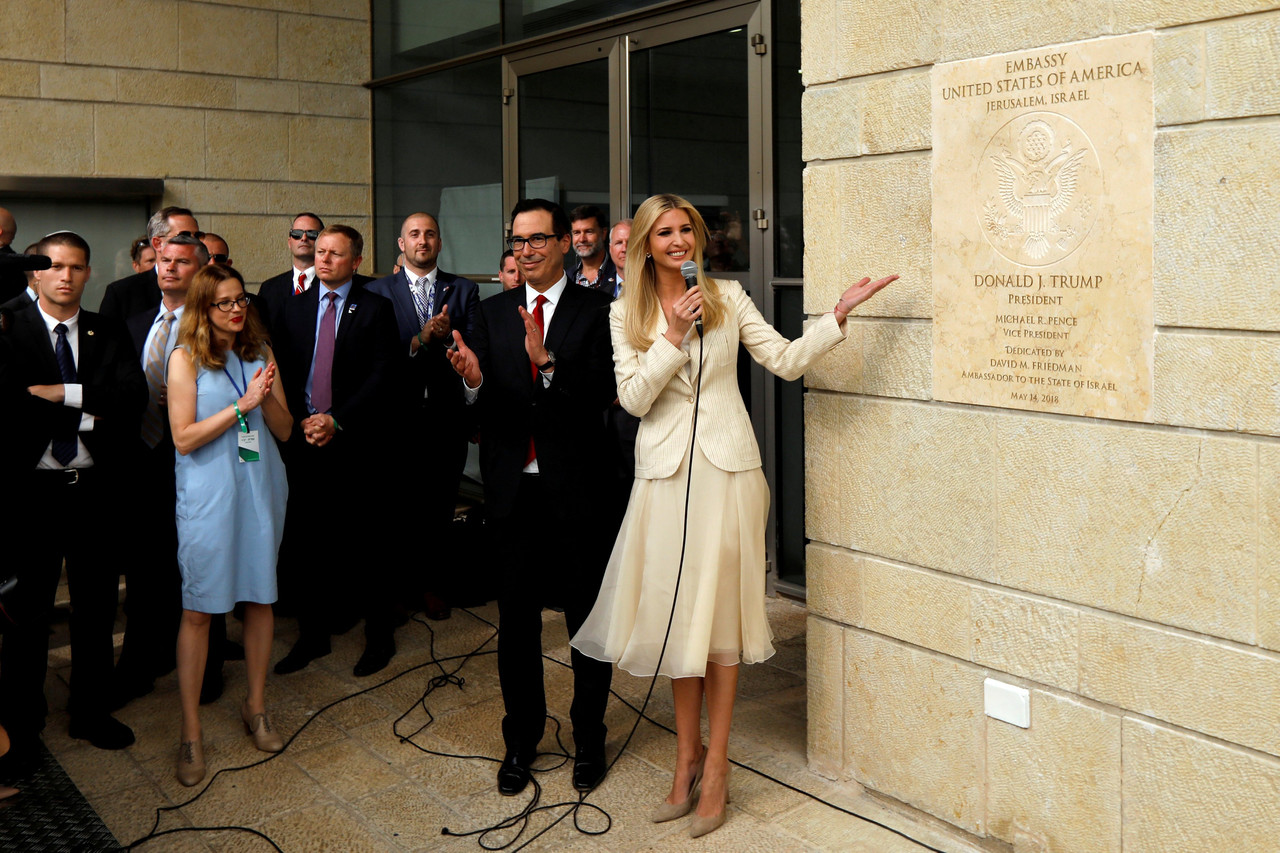 The protests presented a jarring backdrop for a day Washington hoped would laud tight Israeli-U.S. ties. 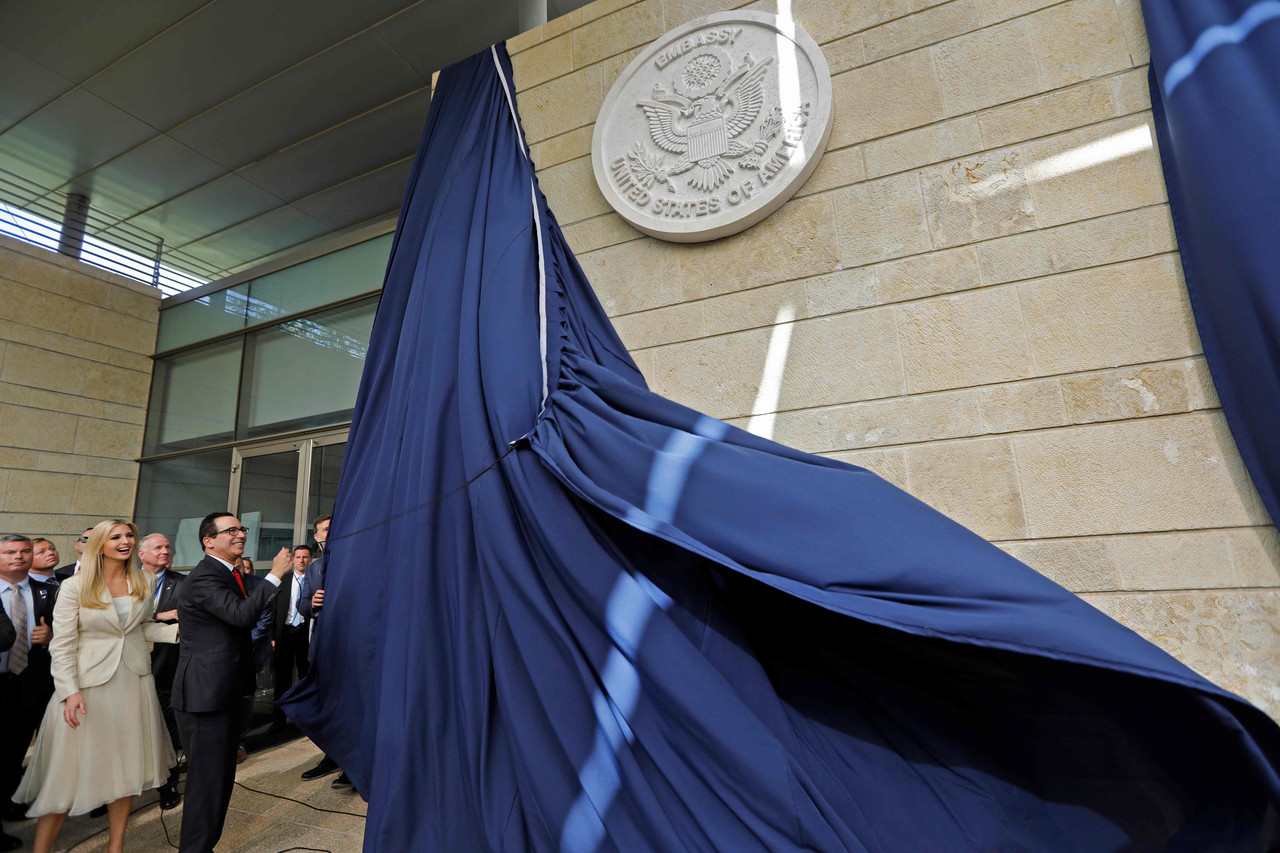 “As we have seen from the protests of the past month and even today, those provoking violence are part of the problem and not part of the solution,” Mr. Kushner told an audience of hundreds of U.S. and Israeli attendees. 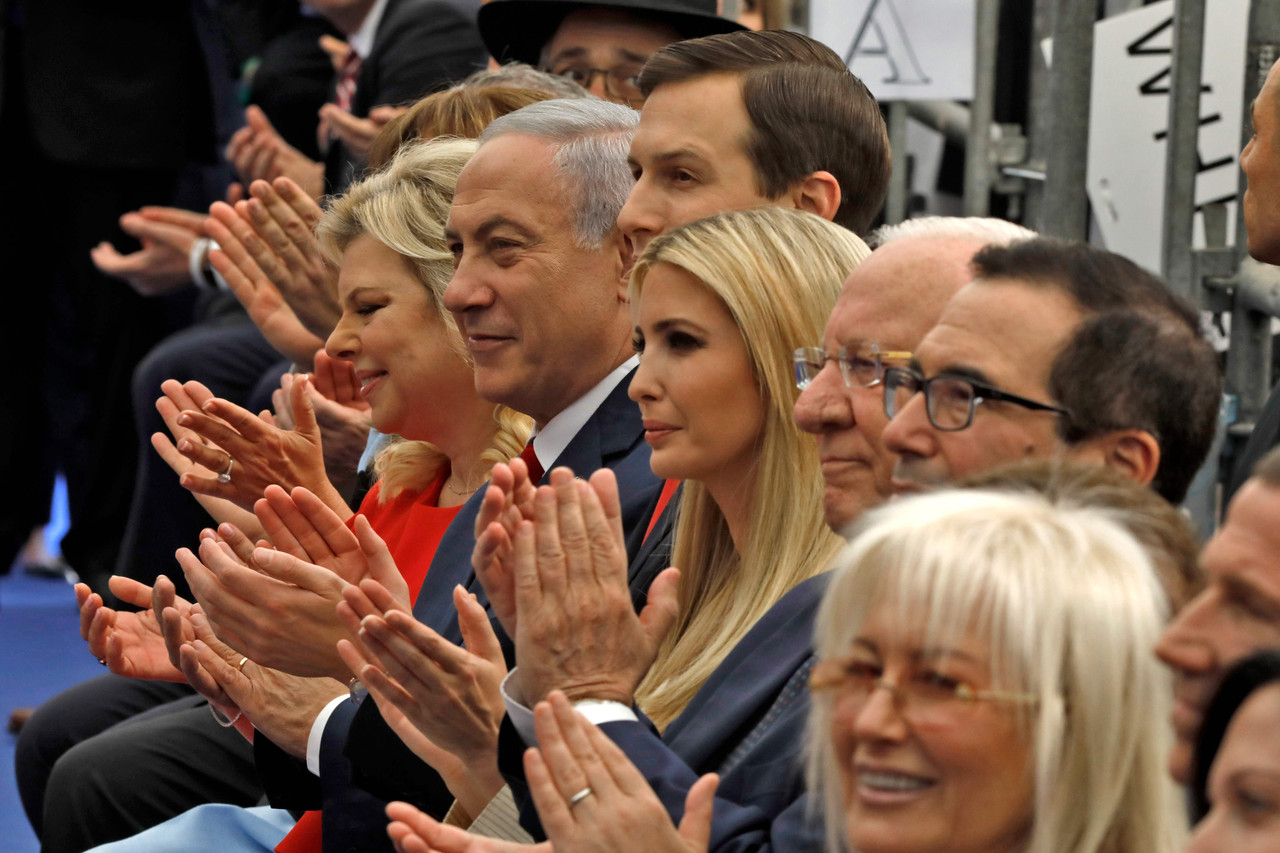 European officials have been more critical of Israel’s response to the violence at the fence separating Gaza and Israel, urging restraint. “Israel must respect the right to peaceful protest and the principle of proportionality in the use of force. Hamas and those leading the demonstrations in Gaza must ensure that they remain strictly nonviolent and must not exploit them for other means,” EU foreign policy chief Federica Mogherini said.

Israeli military officials said Hamas is using the protests as a pretext to stage an attack into Israel. “Every state has the duty to defend its borders, and the terrorist organization Hamas declares that it intends to destroy Israel and sends thousands to break through the border fence in order to realize this goal,” Mr. Netanyahu said.

In a speech Monday night, Palestinian Authority President Mahmoud Abbas called the new U.S. Embassy a “settlement outpost,” and said Palestinian leadership would meet in the coming days to issue a response.

Mr. Trump addressed the ceremony by prerecorded video, saying that the U.S. was “fully committed” to a “lasting peace agreement.” He said the U.S. “extends the hand of friendship” to Israel, the Palestinians and their neighbors.

Arab states have widely condemned the U.S. Embassy opening. But some governments in the region have been seeking better ties with Israel and scaling back aid to Palestinians. In a sign of the apathy over the U.S. decision, Egyptians protested over the weekend about a hike in the metro fares rather than against the U.S. Embassy move.

Saudi Arabia and the United Arab Emirates have pressured Persian Gulf neighbor Qatar to sever ties with Hamas and haven’t delivered millions of dollars of donor funding to the Gaza Strip that they pledged after the 2014 war. Egypt has tried to negotiate with Hamas to return the West Bank-based Palestinian Authority to Gaza to administer it.

Turkey, which continues to publicly support Hamas, said the U.S. bore as much responsibility for the deaths on Monday as did Israel and repeated its opposition to Washington’s decision. 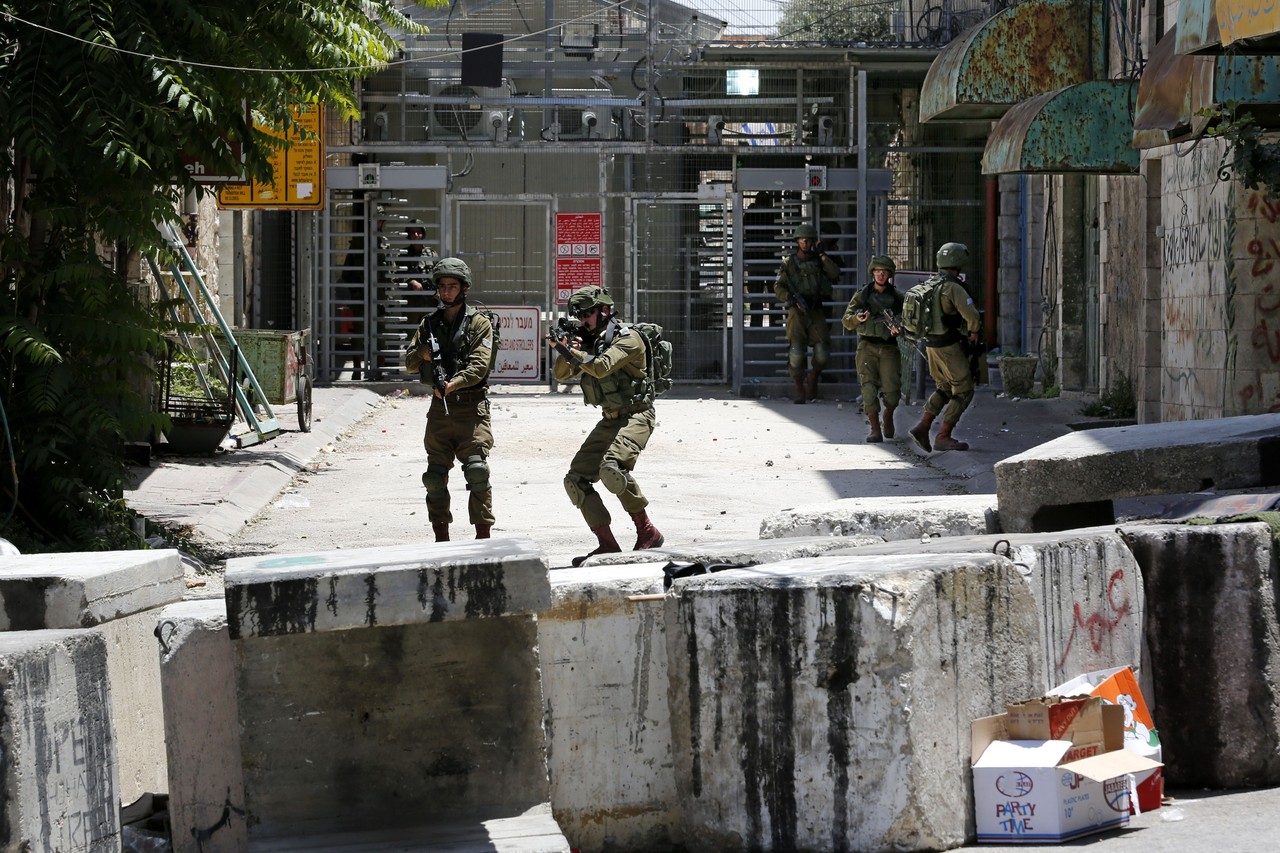 Hundreds of Palestinians protested the opening in the West Bank and East Jerusalem on Monday but the demonstrations were small in comparison with Gaza. There, the protests are expected to continue on Tuesday, on what Palestinians call Nakba Day, or Day of the Catastrophe, marking the day after the anniversary of Israel’s founding on May 14, 1948. Yahya Sinwar, the leader of Hamas in Gaza, suggested last week that more than 100,000 people could storm the fence on Tuesday. 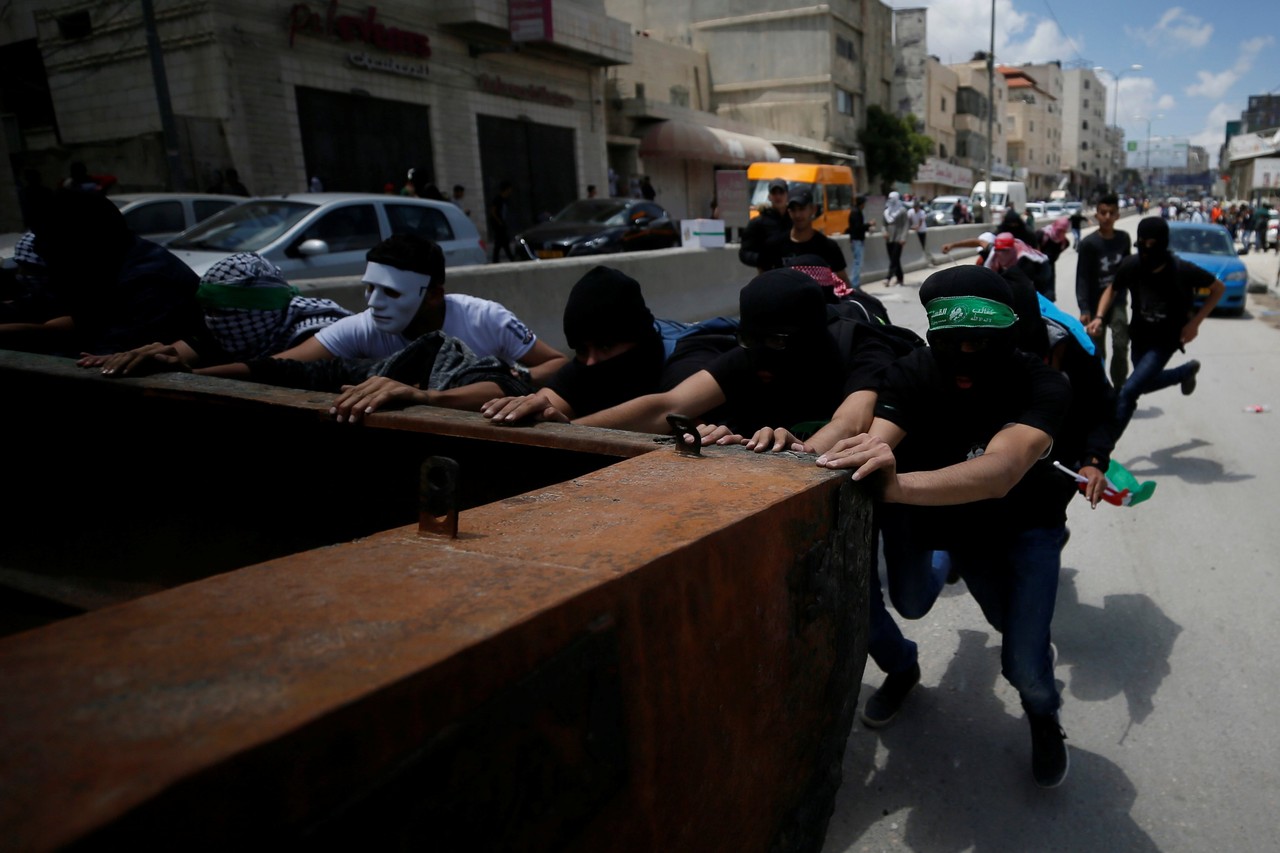 Meanwhile, most of the U.S. Embassy’s functions will remain in Tel Aviv even after the official move, as State Department looks for a permanent site for a new embassy. U.S. Ambassador David Friedman will split his time between the two cities and continue at least initially to live in his official residence in Herzliya, north of Tel Aviv. 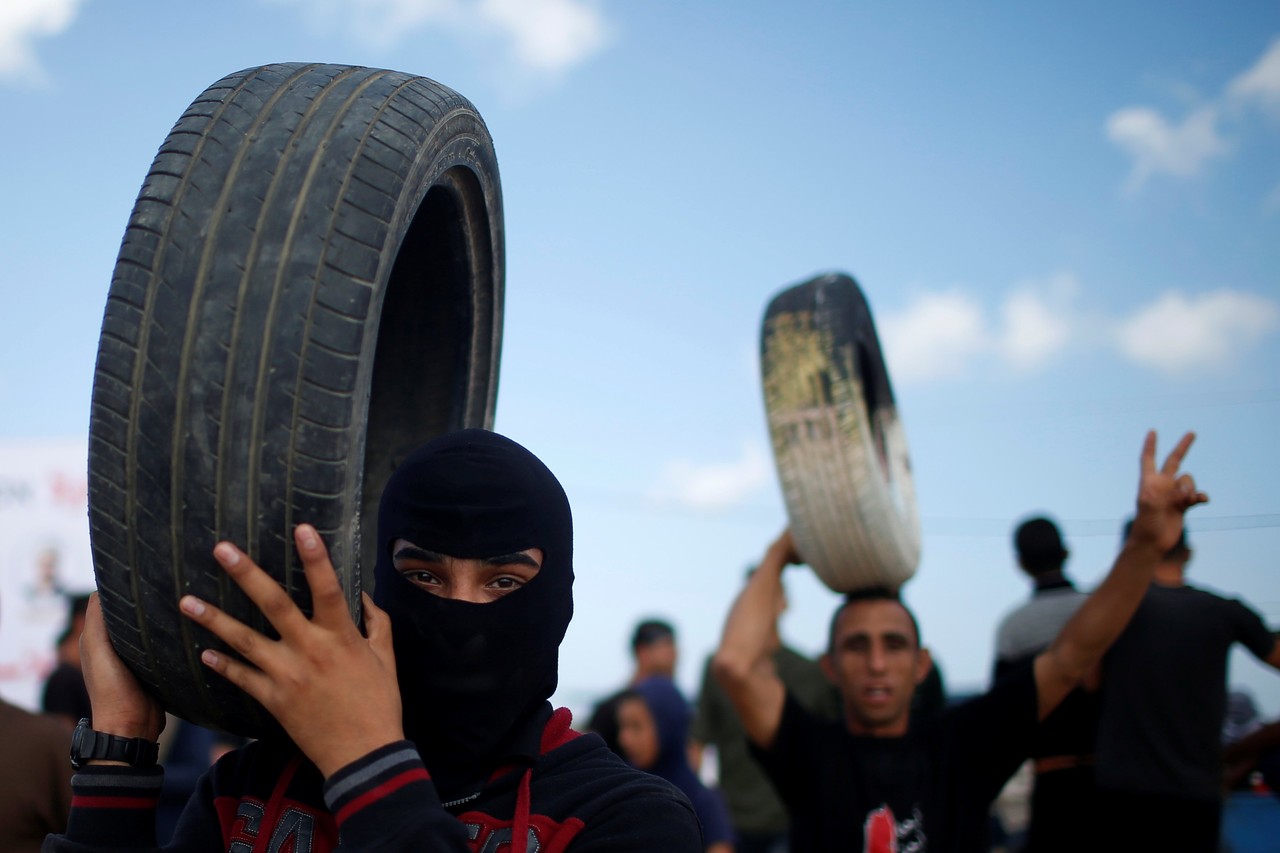 The state department spent about $400,000 to renovate a consular building in Jerusalem’s Arnona neighborhood, changed signs and made security upgrades to temporarily house the new embassy. It will still provide consular services in the building as well as in Tel Aviv. The new site would cost considerably more.

U.S. officials said Monday they would press on with their still-secret plan to secure what Mr. Trump has called “the ultimate deal” for Middle East peace. The plan is mostly finished, they said, and the administration is seeking the right time and place to present it.

“We remain committed to advancing a lasting and comprehensive peace between Israel and the Palestinians,” said Secretary of State Mike Pompeo, who remained in Washington.

Palestinians are refusing to meet with representatives of the Trump administration and say they no longer recognize the U.S. as the main broker of peace talks with Israel.