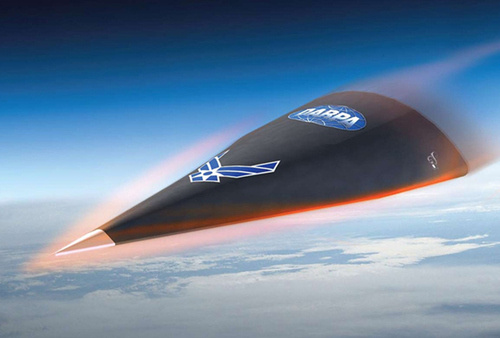 The Pentagon’s controversial plan to hit terrorists half a planet away suffered a setback this weekend, after an experimental hypersonic glider disappeared over the Pacific Ocean.

In its first flight test. the Falcon Hypersonic Technology Vehicle 2 (HTV-2) was supposed to be rocket-launched from California to the edge of space. Then the HTV-2 would could screaming back into the atmosphere, maneuvering at twenty times times the speed of sound before landing north of the Kwajalein Atoll, 30 minutes later and 4100 nautical miles away. Thinly wedge-shaped for better lift, equipped with autonomous navigation for more precision, and made of carbon-carbon to withstand the assault of hypersonic flight, the hope was it could fly farther and more accurately at a lower angle of attack than other craft returning to Earth.

At least, that was the idea. Instead, nine minutes after launch, Darpa researchers lost contact with the HTV-2. They’re still trying to figure out why. The agency says the flight test wasn’t a total bust: The craft deployed from its rocket booster, performed some maneuvers in the air, and “achieved controlled flight within the atmosphere at over Mach 20,” Darpa spokesperson Johanna Jones says.

But it’s bad news for the Pentagon “prompt global strike” program — a burgeoning and hotly-debated effort to almost-instantly attack targets thousands of miles away. The Defense Department is pursuing three different families of technologies to accomplish the task. One is to re-arm nuclear intercontinental ballistic missiles with conventional warheads. But that runs the risk of accidentally triggering a response from another atomic power, who might mistake it for a nuke. A second effort is to build shorter-range cruise missiles than can fly at five or six times the speed of sound; that effort hit some recent turbulence when flight tests for the X-51 Waverider, scheduled for December 2009, were pushed until May 2010. Something like an armed version of the HTV-2 is the third choice.

“There’s always a concern that a conventional warhead on an ICBM might be confused with a nuclear device - what can you do to prove otherwise?” Dr. Mark Lewis, the former chief scientist of the Air Force, tells Danger Room. ”With a high lift vehicle, your trajectory would be so different that no one would likely confuse it with something more sinister.”

Brian Weeden, a technology advisor for the Secure World Foundation, agrees. “This thing itself is not a weapon. But it’s designed to lead to a precision strike weapon,” he says.

But the first step is to figure out what went wrong over the Pacific. Darpa says its investigation is ongoing.

Ted Twietmeyer - What NASA isn’t Telling you about Mars