Pope Francis washes the feet of Muslim migrants, says we are ‘children of the same God’ 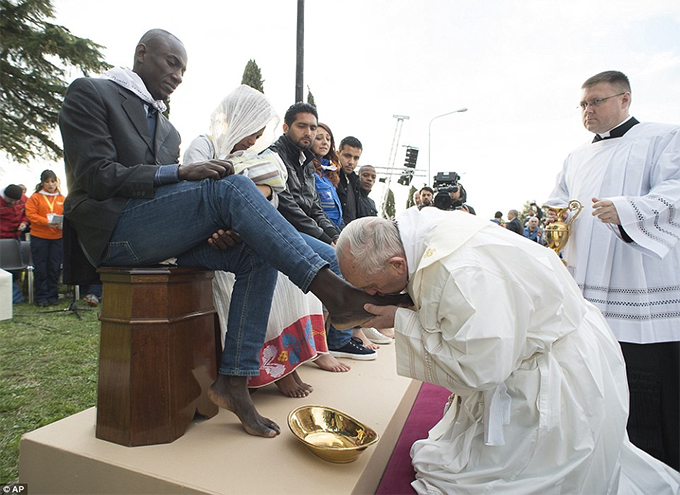 Pope Francis washed and kissed the feet of Muslim, Orthodox, Hindu and Catholic refugees in a moving ceremony during Holy Thursday Mass at a refugee centre on the outskirts of Rome. (AP)

They came from Mali, Eritrea, Syria and Pakistan. They were Muslim, Hindu, Catholic and Coptic Christians. And one by one, Pope Francis knelt down before these migrants on Holy Thursday and washed their feet.

The ritual, performed in a center for asylum seekers outside of Rome, comes amid anti-immigrant sentiment in Europe and in the wake of a terrorist attack in Brussels, for which the Islamic State has claimed responsibility.

"All of us together, Muslims, Hindus, Catholics, Copts, Evangelical [Protestants] brothers and sisters — children of the same God — we want to live in peace, integrated," Francis said during his homily.

The foot-washing ritual became a part of Holy Thursday Mass in the 1950s. Jesus washed the feet of his 12 apostles at the Last Supper. The symbolic act also imitates Jesus's gesture of servitude.

A number of the migrants whose feet were washed by the pope had tears streaming down their faces.

Shortly after Francis became pope in 2013, he washed the feet of Muslims.

A massive crowd didn't turn out to participate in the ceremony or listen to the pope's homily on Thursday, though. From the Associated Press:

Francis was greeted with a banner reading “Welcome” in a variety of languages as he walked down a makeshift aisle to celebrate the Mass. But only a fraction of the 892 asylum-seekers living at the shelter attended, and many of the seats were left empty. Those who came out, though, received a personal greeting: At the end of the Mass, Francis greeted each refugee, one by one, posing for selfies and accepting notes as he moved down the rows.

Francis condemned the attack in Brussels and those behind such violence. "There are manufacturers, arms dealers who want blood, not peace; they want the war, not fraternity," the pope said.

"You, we, all of us together, of different religions, different cultures, but children of the same Father, brothers — and there, those poor people, who buy weapons to wreck fraternity," Francis said Thursday. "Today, at this time, when I do the same act of Jesus washing the feet of twelve of you, let us all make a gesture of brotherhood, and let us all say: 'We are different, we are different, we have different cultures and religions, but we are brothers and we want to live in peace.'"

The Vatican said eight men and four women took part in the ritual, AP reported, including an Italian Catholic; three Eritrean Coptic Christians; four Catholics from Nigeria; three Muslims from Mali, Syria and Pakistan; and a Hindu man from India.

An image of Francis kissing one of the migrants' feet was also posted to his new Instagram page. 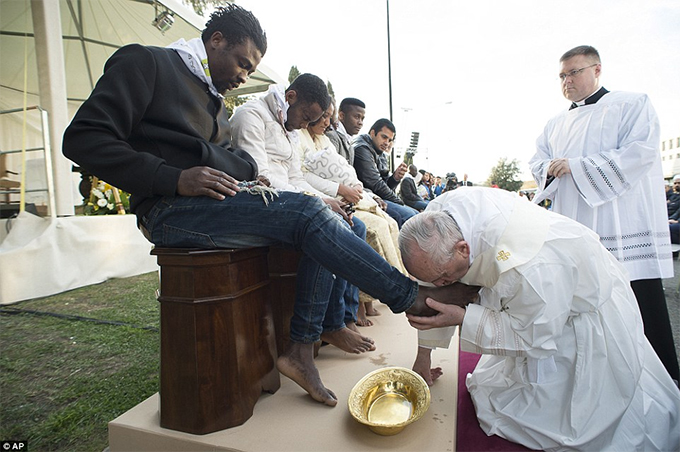 Pope Francis has previously spoken about Europe's refugee and migration crisis, calling migration "a structural reality" and saying that Europe needs to find a balance between security and assisting migrants.

"Migrants are our brothers and sisters in search of a better life, far away from poverty, hunger, exploitation and the unjust distribution of the planet’s resources which are meant to be equitably shared by all," Francis said in a statement earlier this year.