Predating Giza, 4,600-Year-Old Pyramid Excavated in Egypt Was Not For Burials

Archaeologists working near the ancient settlement of Edfu, in southern Egypt, have uncovered a step pyramid that dates back about 4,600 years, predating the Great Pyramid of Giza by at least a few decades.

Scattered throughout central and southern Egypt, the provincial pyramids are located near major settlements, have no internal chambers and were not intended for burial. Six of the seven pyramids have almost identical dimensions, including the newly uncovered one at Edfu, which is about 60 x 61 feet (18.4 x 18.6 m).

The purpose of these seven pyramids is a mystery. They may have been used as symbolic monuments dedicated to the royal cult that affirmed the power of the king in the southern provinces.

"The similarities from one pyramid to the other are really amazing, and there is definitely a common plan," said Gregory Marouard, a research associate at the University of Chicago’s Oriental Institute who led the work at the Edfu pyramid. On the east side of the newly uncovered pyramid, his team found the remains of an installation where food offerings appear to have been made — a discovery that is important for understanding this kind of pyramid since it provides clues as to what they were used for.

Initial results of the excavation were presented at a symposium held in Toronto recently by the Society for the Study of Egyptian Antiquities. 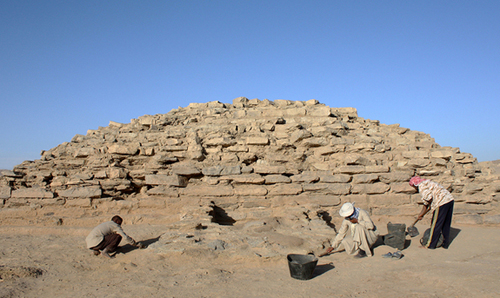 Though scholars knew of the existence of the pyramid at Edfu, the structure had never been excavated before Marouard’s team started work in 2010, he said in the study. His team found that the pyramid was covered by a thick layer of sand, modern waste and remains from the pillaging of its blocks.

It didn’t look like a pyramid he said, and people in a nearby village even thought the structure was the tomb of a sheikh, a local Muslim saint. As the team went to work cleaning the monument, the ancient pyramid was revealed.

"The construction itself reflects a certain care and a real expertise in the mastery of stone construction, especially for the adjustment of the most important blocks," said Marouard in his paper. Marouard also noted that the pyramid was built directly on the bedrock and was constructed entirely with local raw materials.

Joseph Davidovits - The Construction of the Pyramids & Amenhotep, son of Hapu