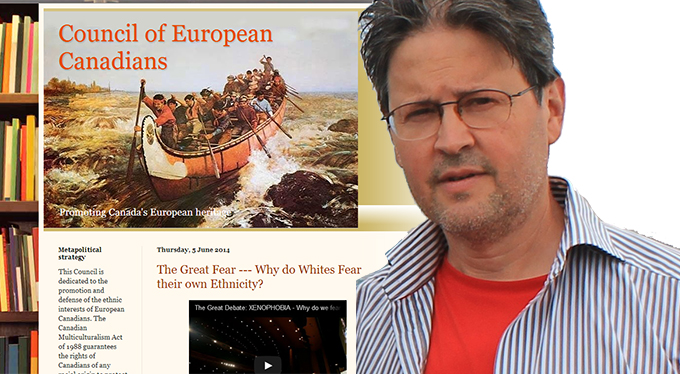 A New Brunswick university professor is facing complaints after calling Vancouver’s plan to root out racist policies from its past an exercise in manipulating “white guilt.”

In a series of blog posts, Ricardo Duchesne of the University of New Brunswick also accused Vancouver Coun. Kerry Jang of scheming to fleece white Vancouverites on behalf of ethnic Chinese.

“Clearly he is exploiting White ideas to advance the ethnic interests of the Chinese, utilizing the same white guilt our educational institutions inflict on White children,” Duchesne wrote.

“What he calls ‘pride’ is nothing but the relentless demands by Asians to extract ever more resources from Whites. It is time Whites show respect for themselves and stop kowtowing to the Chinese.”

Vancouver council voted unanimously last month to study its records to determine if there were any racist laws or regulations that would have hurt ethnic groups.

The move was approved weeks after the province of British Columbia apologized for its role in creating discriminatory policies, and several years after the 2006 apology by the federal government for the $500 Chinese Head Tax, which was Canadian law until 1923.

Jang, who has complained to Duchesne’s university, said he is third-generation Canadian and shocked city council’s move would be taken this way.

“When the professor starts talking about how I should be worrying about what they’re doing in China, I think: I’m Canadian. I’m expected to be treated like anyone else,” Jang said.

Vancouver has already found some racist property covenants that deny ownership to “Asiatic, negro or Indian” people, according to historian Jean Barman.

“There were covenants on houses. They couldn’t be sold to ‘Asiatics’ as it was termed at the time,” she said.

There’s no talk of compensation from the city at this point, but any compensation would likely come from city tax funds, which are taken from a diverse city population – about 50 per cent white, 30 per cent Asian, and 10 per cent South Asian, according to the 2006 census.

In his blogs, Duchesne also claims that ethnic Chinese “altered a formerly elegant, serene, community-oriented British city of Vancouver, turning it into a loud, congested Asian city (still attractive only because of the architectural and institutional legacy of past White generations.)”

He claimed that in Richmond, “mainland Chinese migration has already helped create the first majority-Chinese city outside Asia, with White citizens cornered into small enclaves and many being forced to sell their homes and move out as ‘millionaire migrants’ take over.”

Barman said she’s unaware of anyone, white or otherwise, being forced to sell their homes. She said ethnic Chinese have been a big part of Vancouver since its inception, and that Chinese labour was instrumental in building the Canadian Pacific Railway.

Jang said the University of New Brunswick should reconsider whether it wants to have Duchesne on campus. “I would not feel safe [attending there] knowing that someone like that was on faculty,” he said.

Reached by Skype at his home, Duchesne said he was born in Puerto Rico and arrived in Montreal when he was 15. Other comments he has made have also been controversial, but he denied that he is racist.

“The whites who created this country are supposed to be bending over backwards in a state of shame for having built the best country in the world,” he told CTV News.

Council of European Canadians: An excellent website in defense of the people and culture of the West

Ricardo Duchesne is a professor at the University of New Brunswick and well-known to TOO readers. His latest project is the Council of European Canadians whose website includes a noteworthy mission statement as well as regular articles, mainly by Prof. Duchesne. Whereas many conservative organizations are terrified to phrase their arguments in ethnic or racial terms (“limited government,” “family values,” “lower taxes”), the mission statement is refreshingly phrased explicitly in terms of the ethnic interests of European Canadians: “This Council is dedicated to the promotion and defense of the ethnic interests of European Canadians.”‘

It should, of course, be head-bangingly obvious that Europeans have ethnic interests and that pursuing their interests in officially multicultural Canada is entirely legitimate. After all, other ethnic groups are very well-organized and pursue their interests in a wide variety of ways. But, as we all know, such a statement is revolutionary in the Western world where only Whites can be racist and where any sign that Whites are organizing to pursue their interests is greeted as a sure sign of an impending holocaust.

The Council of European Canadians eschews political activity in favor of creating a metapolitical “counter-cultural movement against the established order … by conducting active forms of thinking through such practices as conferences, alternative web radio programs, web-journalism, and even distribution of flyers.” Such a strategy is required because of the current power of cultural Marxism:

We are against an establishment that is determined to destroy European Canada through fanatical immigration, race-mixing campaigns, imposition of a diversity curriculum, affirmative action in favor of non-Europeans, and promotion of white guilt.

It is common for the left to label race realists and others opposed to immigration as extremists. But as Prof. Duchesne notes, it is the present immigration policy throughout the Western world that is fanatical and extreme, pouring millions of people from every corner of the world into Western (and only Western) societies. Who are the real extremists? The Council is unabashedly Eurocentric:

We must be proud of our heritage, of the heroic role European pioneers, settlers and nation builders played in the history of Canada. We will nurture a view of Canada that emphasizes our nation’s greatness, achievements, and glory. We must learn to take risks, and learn how to be consistently Eurocentric in our behaviour and communications. We must reject all euphemism, double-speak, and opportunism. The Council will produce key concepts and arguments that will arm people with the ideas and courage to speak and fight against those who seek to demonize us and in our efforts to recruit and persuade Canadians. (“Our Beliefs and Goals“)

In his articles, Prof. Duchesne has focused mainly on the continuing campaign for apologies and financial reparations to the Chinese. In the U.S., the Chinese (like Jews) are often considered a “model minority” because they do well in school and are upwardly mobile. But, also like the Jews, it’s clear that the Chinese in Canada have quickly learned how to play ethnic hardball in Western cultures by appealing to the moral sentiments of Whites and to ideals of moral universalism and individual rights that are the creation of Whites. In “Background Traits for Jewish Activism” I contrasted Diaspora Jews with Overseas Chinese on aggressiveness toward the majority population. Whereas Jews have behaved very aggressively against traditional White majorities throughout the West (most outrageously, by advocating dramatic changes in the ethnic balance of Western societies favoring non-Whites), the Overseas Chinese were content to form business networks and generally keep a low profile. However, the examples I relied on were in non-Western countries in Southeast Asia:

On the basis of Prof. Duchesne’s account of Chinese behavior in Vancouver, it is clear that the Chinese are quite capable of behaving aggressively against the majority population in a contemporary Western context where such behavior is not only legitimate but encouraged by the official multicultural ideology. Whereas the Overseas Chinese passively accepted restrictions on citizenship throughout Southeast Asia, the fact that Chinese could not vote in Canada until 1947 is a major point of grievance against European Canada (see Duchesne’s “Head tax: When will migrant Chinese apologize for rampant racism in China?“). As we have often noted about Jewish activism, Jewish intellectuals and organizations have appealed to uniquely Western concepts of individual rights and moral universalism as tools to advance their narrow ethnic interests. The same is true of Asian immigrants to Canada. Yet all this high-flown rhetoric is from people who have emigrated from cultures where crude racism is the norm:

Asians come from cultures that, by our standards, are crudely racist and where individuals enjoy few rights. … The ideas and values [adopted by a Chinese ethnic activist in Canada] were nurtured by Whites, and that these ideas are driven by the erroneous universal egalitarian illusion that White countries must be diversified otherwise they are racist, even though there is not a single non-White country calling for diversity and mass immigration. Clearly [this Chinese activist is] exploiting White ideas to advance the ethnic interests of the Chinese, utilizing the same white guilt our educational institutions inflict on White children. What he calls “pride” is nothing but the relentless demands by Asians to extract ever more resources from Whites. It is time Whites show respect for themselves and stop kowtowing to the Chinese. … No racial group in human history other than Whites has ever been committed to racial diversity. … But what is perhaps even more astonishing is that these [Chinese] “millionaire migrants” enjoying apologies from working and middle class Whites come from a culture that, by the standards of British Columbia between 1886 and 1947, are not merely illiberal but vulgarly racist.

Read the rest of the article at theoccidentalobserver.net