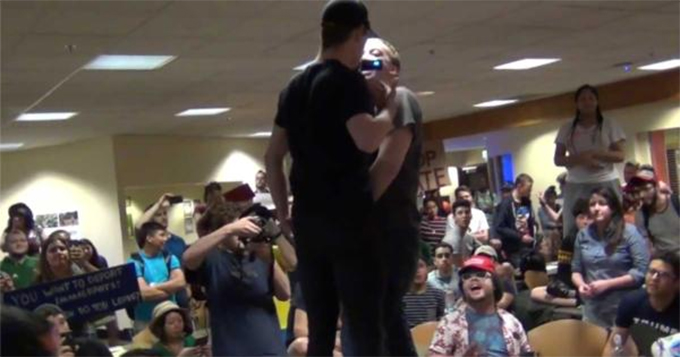 The inaugural meeting of a Students for Trump group at Portland State University descended into chaos Thursday after anti-Trump protesters barged in to halt the proceedings.

Video footage of the altercation shows protesters displayed pro-communist signs, attempted to shut down the meeting with shouted chants, and at times nearly came to blows with the Trump supporters.

The video begins by panning around a large, ground-floor room filled to capacity with students, and shows additional students standing outside holding signs—one bearing the slogan “Red Power”—and a Mexican flag against the windows.

Inside, meanwhile, the pro- and anti-Trump factions began a dialogue that quickly degenerated into shouting and name-calling.

Another protester, standing atop a table for increased visibility, declared, “I just want you to know that this is what it looks like to actually get in the way of white supremacy,” at which point she was drowned out by the dismayed groans of the Trump supporters.

“I’m on SAC, you fuckers! Shut the fuck up!” yet another demonstrator shouted in a bid for attention, only to be met with a determined chant of “Can’t stump the Trump!”

The protester then warned them that, “if you don’t let her talk, I will fuck shit up.”

In some cases, tempers cooled enough for small groups of students to converse about their respective positions, as when one Trump fan explained that his own parents had immigrated legally, which is why he considers it unfair to allow others to enter the country without going through that arduous process.

OtheÄ‘rs were less conciliatory, though, such as one protester who actually suggested that it was the Trump supporters who were being disruptive despite the fact that they had actually organized the meeting.

“The only way to combat this shit is to join an organization that has an anti-racist, anti-capitalist stance,” she announced, telling the pro-Trump students, “[y]ou need to get out of the fucking way and let people of color … let these people organize themselves.”

Eventually, the Students for Trump members seemed to accept that they would not be able to continue their meeting as planned, and gradually departed the venue, though some of them had to argue with a knot of protesters that was blocking their path.

Following the exodus, one of the leaders of the demonstration applauded the remaining protesters, saying, “I just want everybody here to know that you have just participated in a successful Trump shutdown!

“If they try it again, the same shit is gonna happen, I promise you,” she vows.

Some students lamented the disruption on the Facebook page for the event, suggesting that future meetings should be held privately, or even off-campus, but others took a different view, calling the incident “a win” for Student for Trump, and suggesting that such displays actually hurt the protesters more than they do Trump supporters.