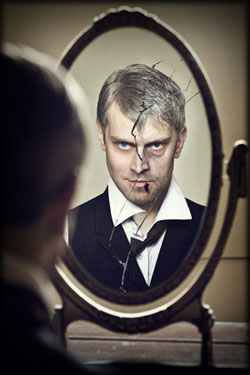 Psychopaths are born with temperamental differences such as impulsivity, cortical underarousal, and fearlessness that lead them to risk-seeking behavior and an inability to internalize social norms. On the other hand, sociopaths have relatively normal temperaments; their personality disorder being more an effect of negative sociological factors like parental neglect, delinquent peers, poverty, and extremely low or extremely high intelligence.

Anti-social personality disorder results in extremely violent acts. Though psychiatrists often consider and treat sociopaths and psychopaths as the same, criminologists treat them as different because of the difference in their outward behaviour. 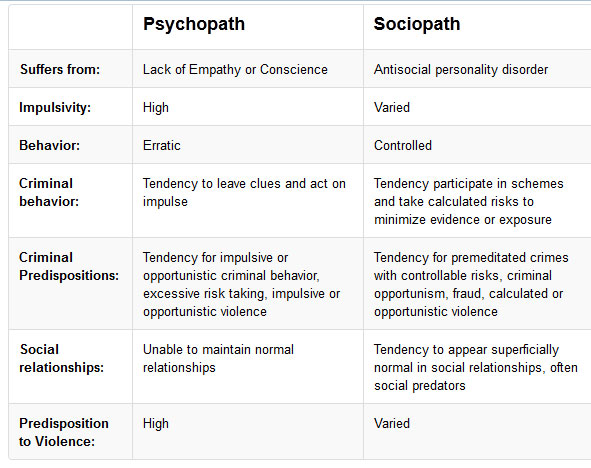 Differences in Outward Behavior of a Psychopath and a Sociopath

Psychopaths often live at the fringes of society. They often tend to be extremely disorganized and are unable to maintain normal relationships with family, friends or co-workers.

Unlike psychopaths, sociopaths can be almost obsessively organized and are normal in their social relationships, often forming symbiotic or parasitic relations. A sociopath would likely live an outwardly normal life and appear to blend in well with society; they may even be charming.

Psychopaths often find it hard to maintain a steady job and home.

Sociopaths often have successful careers and try and try to make others like and trust them. This is because they understand human social emotions quite well but are unable to experience them. This allows them to be master manipulators of human emotions.

A psychopath’s outbreaks of violence are erratic and unplanned. After an erratic act, psychopaths can often be easily identified as they generally leave behind a trail of clues and a history of violent outbursts.

A sociopaths can plan acts of violence for years and may often be motivated by greed or revenge. Violent crimes by sociopaths are often controlled and often go undetected until after a sociopath is caught.

Read the full article at: diffen.com

Despite "their extensive criminal histories and high recidivism rate", psychopaths showed "a great proficiency in persuading parole boards to release them into the community." It is purported that high-psychopathy offenders (both sexual and non-sexual offenders) are about 2.5 times more likely to be granted conditional release compared to non-psychopathic offenders."Source: Wikipedia

Terrorists are sometimes called psychopaths, and comparisons can be drawn with traits such as antisocial violence, a selfish worldview that precludes welfare for others, lack of remorse or guilt, and blaming external events. However, such comparisons could also then be drawn more widely, for example to soldiers in wars. In addition, it has been noted that coordinated terrorist activity requires organization, loyalty and ideology; traits such as self-centeredness, unreliability, poor behavioral controls, and unusual behaviors may be disadvantages.

Recently Häkkänen-Nyholm and Nyholm (2012) have discussed the possibility of psychopathy being associated with organised crime, economic crime and war crimes.

It has been speculated that some psychopaths may be socially successful, due to factors such as low disinhibition in the triarchic model in combination with other advantages such as a favorable upbringing and good intelligence.