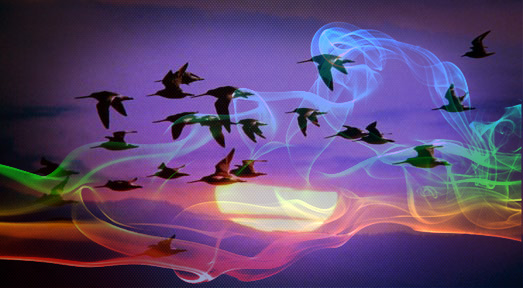 For years researchers have warned against the ever increasing prevalence of wireless technology, radio waves and electromagnetic pollution. Because this pollution is invisible, the dangers are often denied or dismissed, especially if it means changing current cellphone or wireless technology.

A new study has reignited the issue, showing that birds are affected by radio waves. Scientists say that birds orient themselves using the Earth’s magnetic field. The new research demonstrates that waves disrupt their internal magnetic compass, disorienting them and disrupting their migration.

Could this reaction and confusion explain many instances of mass bird deaths, as well as mass deaths of bees, fish, and larger animals? This certainly supports those who warn of the physical reactions to wi-fi connections, cell phone use, and widespread electromagnetic smog.

More on this from The Australian...

Radio waves disrupt the magnetic “compass” in robins, according to a study published on Wednesday that is likely to fuel debate about the safety of electronic devices.

In a long and careful experiment, German scientists found that migrating robins became disorientated when exposed to electromagnetic fields at levels far lower than the safety threshold for humans.

The frequencies were in the medium-wave band used by AM radio — not the bands used by mobile phones, whose safety has been contested by some campaigners.

“For decades, it has been hotly debated whether man-made electric and magnetic fields affected biological processes, including human health,” the authors, from Oldenburg University, wrote in Nature.

The tests show “a reproducible effect of anthropogenic [man-made] electromagnetic noise on the behaviour of an intact vertebrate”. Birds have long been thought to navigate using light and Earth’s magnetic field. Where their magnetic “compass” is and how it works remain unclear — research in homing pigeons suggests it may derive from an iron-rich crystal in their beaks called magnetite.

Seven years ago, the Oldenburg researchers were surprised to find that European robins became confused when they made a stopover on the university campus.

Intrigued, the scientists prepared a wooden hut with aluminium sheeting on its walls and “earthed” by a cable to the ground. This virtually eliminated electromagnetic radiation in the range from 50 kilohertz to 20 megahertz range but had no effect on Earth’s magnetic field.

Over seven years, experiments showed that when the screening was in place, birds in the hut adopted their normal position for migration.

But when the screening was removed or the birds were exposed once more to a gadget emitting background electromagnetic noise, they were disoriented.

The disruption occurred from weak electromagnetic signals at levels equivalent to the bird flying at a distance of around five kilometres from a 50-kilowatt AM radio transmitter.