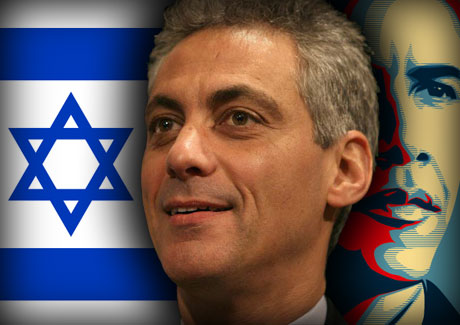 John O'Neill and another FBI agent who still works for the bureau discovered that Emanuel was heavily involved in the decision to place Lewinsky close to Clinton. O'Neill retired after being set up in a smear operation involving a temporarily stolen briefcase in 2001, accepted the top security position for Kroll Associates at the WTC, and was killed in the 9/11 attack. Clinton reportedly had knowledge of Israeli intelligence penetration of White House communications systems, and Lewinsky, in sworn testimony before the Office of Independent Counsel, stated:

It is now known that the 'foreign embassy' was that of Israel. WMR has learned from US intelligence sources that Emanuel was discovered to be part of a political intelligence and blackmail operation directed against Clinton by Israel. We have also learned that the FBI investigation of Emanuel is part of a file code-named Mega, a reference to a top-level Mossad agent in the Reagan administration, who was said to have run a number of Israeli agents, including US Navy spy Jonathan Pollard.

More sinister than Karl Rove and potentially deadlier than Dick “Darth Vader” Cheney, his name is Rahm Emanuel, and he was recently appointed chief of staff in the president-elect’s White House. This first official act should send waves of alarm through people because Barack Obama promised change, but what we’re getting is the exact same cabal that brought us 9-11 and endless war in the Middle East.

Initial media reports described Emanuel as a vulgar, Chicago-based enforcer who had an aggressive, in-your- face, pit-bull style. Others painted him as a partisan Washington insider with strong ties to House Speaker Nancy Pelosi (D-Calif.).Although these labels seem harsh, the reality is far worse.

Rahm Emanuel, nicknamed “Rahmbo,” is a pro- Israel Orthodox Jew who was educated in a Talmudic yeshiva and served as a volunteer in the Israeli Defense Force (IDF). He is a dual citizen of Israel, which his office refused to deny when AFP inquired. Israel is the only nation where Americans can apply for and obtain citizenship without automatically renouncing U.S. citizenship.

Some Americans are unilaterally proclaimed citizens of other countries, as when an American GI marries a French girl and becomes an automatic citizen of France. But if the GI applied for and obtained French citizenship, he would lose his American citizenship. It is impossible to be a 100 percent loyal American and have an ounce of loyalty to another country; there is no #101 percent and the interests of Israel and the United States are not always synonymous.

Those familiar with the 9-11 terrorist attacks know that the IDF was instrumental in training the Dancing Israelis who—from a rooftop in Weehawken, N. J.—had the foreknowledge to videotape both WTC towers being struck by kamikaze jetliners, then celebrate afterward.

Mentored by members of Chicago’s corrupt party machine like convicted Congressman Dan Rostenkowski, Emanuel gravitated to Washington in 1991 after becoming Bill Clinton’s campaign finance committee director. His star rose even higher when he served as one of the primary NAFTA architects and pushed strict anti-gun legislation. After leaving his post as a policy aide for the Clintons, he used his influence as an investment banker to rake in millions during the late 1990s. With this money, Emanuel won a congressional seat in 2002, became the fourth ranking House Democrat by 2006, and is now the most powerful member of Obama’s executive office team.

What truly makes Emanuel dangerous is that his Israeli-born father Benjamin was an integral member of the Zionist terror group known as Irgun during the 1940s. Along with another notorious terror outfit—the Stern Gang—Irgun bombed Jerusalem’s King David Hotel in 1946 where 96 people were killed; while also instigating the 1948 Deir Yassin Massacre.

Rahm Emanuel is the son of a terrorist who directly plotted the assassination of Count Bernadotte, a Swedish diplomat and United Nations envoy who tried to broker peace in Palestine. But Irgun didn’t seek treaties. It instead sought racial cleansing and genocide. According to Elisabeth Bumiller in The New York Times, Benjamin Emanuel passed secret codes to Shin Bet bomber and future Prime Minister Menachem Begin. These very same Jewish terrorists eventually became the recognized Israeli government in 1948, as well as predecessors to Benjamin Netanyahu’s right-wing Likud Party.

Rahm Emanuel likes to brag about his role in discovering Barack Obama. “Six years ago, people on the North Side of Chicago took a bet on a young kid,” reporter D.H. Williams writes of their symbiotic relationship.

“Rahm and Barack have a deep history together in Chicago politics. Emanuel has been instrumental in the rise of Barack Obama from neophyte senator to the next president of the United States. Getting virtually no media attention, Rahm Emanuel has been by Obama’s side during most of the last two years on the campaign trail.”

If Karl Rove was George W. Bush’s architect, the same can be said of the Emanuel connection. When Obama bowed and groveled at the American Israel Public Affairs Committee (AIPAC) convention on June 4, 2008, it was Emanuel who escorted him to meet the executive board afterward.

Emanuel has been the operative who, according to the Chicago Tribune, “remade the Democratic Party in his own image.” Illinois Rep. Ray LaHood (R) seconded this notion. “He legitimately can be called the golden boy of the Democratic Party today. He recruited the right candidates, found the money and funded them, and provided issues for them. Rahm did what no one else could do.”

Worst of all, Emanuel is a rampant warmonger who takes his cues from the neo-cons. In his book The Plan: Big Ideas for America, he wrote, “We need to expand the U.S. Army by 100,000 more troops.”

What will America’s next target be under an Obama presidency? Sources close to Emanuel say that he has a “Zionist obsession with Iran.”

To get a final idea of what we’re dealing with, consider this quote from U.S. war journalist Pat Dollard:

Letme tell you right now, no exaggeration. Rahm Emanuel is the devil. He is . . . a Goebbels, a Mengele, a perfect Cromwell who would, without the
faintest evidence of hesitation washing across his face for even a millisecond, order and even personally execute each and every human being he or Obama perceived to be an enemy of the regime. And if you ever personally offended him, and he had the opportunity to kill you, he would probably do it by starting with your children as you were made to watch. He is a bad guy.

Some researchers have gone so far as to claim that Emanuel was the notorious “Mega” spy deep inside the Clinton administration who passed top-secret documents about Iran on to the Israeli government, causing a great deal of chaos among the various intelligence agencies. Be very wary of this man. Like the “Prince of Darkness” Richard Perle and Michael Chertoff before him (both of whom hold dual U.S.-Israeli citizenships), it may well be proven that his loyalties rest more with a fabricated little state in the Middle East than they do with us.

Victor Thorn is a hard-hitting researcher, journalist and the author of
many books on 9-11 and the New World Order. These include 9-11 Evil:
The Israeli Role in 9-11 and Phantom Flight 93.