The couple told the immigration adjudicator they’re being persecuted in the United States.

Evi Quaid said friends such as actors David Carradine and Heath Ledger have been "murdered" under mysterious circumstances and she’s worried something will happen to her husband.

"We feel our lives are in danger," she said.

"Randy has known eight close friends murdered in odd, strange manners ... We feel that we’re next." 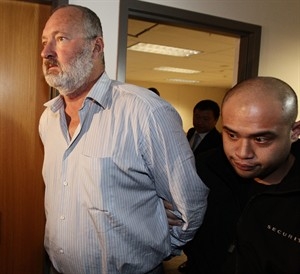 VANCOUVER - Actor Randy Quaid [left] and his wife say they need asylum in Canada to escape from "Hollywood star-whackers."

The couple, who have been embroiled in several legal skirmishes in California all year, were picked up in a tony shopping neighbourhood Thursday and have been held in jail on outstanding U.S. warrants.

Their first appearance in front of an immigration hearing turned into a bizarre spectacle of outrageous claims and solemn promises.

The couple told the immigration adjudicator they’re being persecuted in the United States. 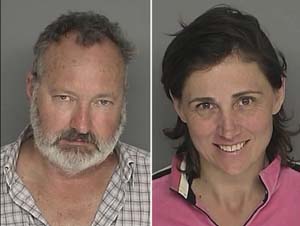 Evi Quaid said friends such as actors David Carradine and Heath Ledger have been "murdered" under mysterious circumstances and she’s worried something will happen to her husband.

"We feel our lives are in danger," she said.

"Randy has known eight close friends murdered in odd, strange manners ... We feel that we’re next."

Ledger was nominated for an Oscar for his lead role in the movie "Brokeback Mountain." He died in January, 2008 from an accidental overdose.

Carradine was star of the hit 1970s television series "Kung Fu" and also had a movie career before he hanged himself in Thailand last year. He was 72.

During a break in the proceedings, the Quaids’ lawyer, Brian Tsuji approached the media to read a single-sentence statement from the Quaids:

"We are requesting asylum from Hollywood star whackers," he read, declining further comment on the mental state of his clients. 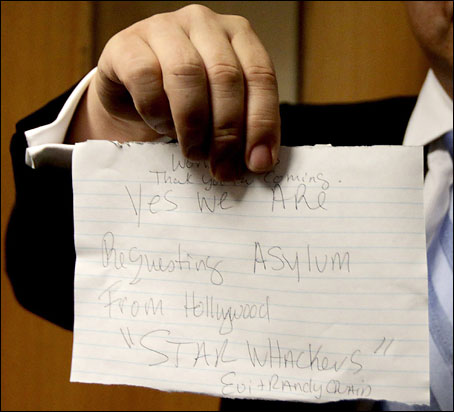 The Quaids’ lawyer holds their "statement" to the press. (AP/The Canadian Press, Darryl Dyck)
The Quaids were ordered released from custody, but must each post a $10,000 bond on a promise to appear for their next hearing Thursday.

Vancouver police say they encountered the pair after responding to a call for assistance and a check revealed the couple was wanted on outstanding U.S. warrants.

Police would not elaborate on how they came to be in contact with the Quaids. The pair are not wanted for any crimes in Canada, but were taken into custody by the Canada Border Services Agency on Thursday afternoon.

Friday’s hearing was mandatory to determine if their detention should continue. Authorities argued they posed a flight risk and should remain in jail.

But Randy Quaid said he and his wife came to Canada because he was being given an award by a film critics group. He said the couple was considering moving to Vancouver where Randy planned to re-start his career.

He said the pair believed the warrants were issued by mistake and had been withdrawn and the couple didn’t travel north in an effort to skip out on them.

Evi Quaid said she believed the warrants were a set-up.

A U.S. judge issued the arrest warrants after the couple failed to show up at a California court hearing stemming from their arrests last month on suspicion of illegally squatting at a home.

Quaid and his wife face felony vandalism charges after more than $5,000 in damage was found in a guest house of a Montecito, Calif. home they previously owned.

The Quaids frequently missed court appearances in an earlier case involving charges they defrauded an innkeeper. That case was resolved in April with Evi Quaid pleading no contest to a misdemeanour count. The charges against her husband were dropped.

On Friday, the Quaids promised they would appear for their next hearing. Evi Quaid said she’d be willing to wear an ankle bracelet while staying at a posh Vancouver hotel.

"It’s been a very welcoming nation to me. I would not do anything to besmirch my reputation."

Evi Quaid said her continued detention could seriously endanger her health. She said a jail nurse has told her her blood pressure is dangerously high from the stress.

The couple lamented that their puppy, which was with them when they were arrested, is now in a shelter.

Randy Quaid, 60, is best-known for supporting roles in films such as "Independence Day,’’ "National Lampoon’s Vacation’’ and "Brokeback Mountain."

He is the older brother of Dennis Quaid.