Jan 16, 2010 Source: telegraph.co.uk
A tape recording of Nazi officers describing the moment they found Adolf Hitler's body in his Berlin bunker has been discovered. 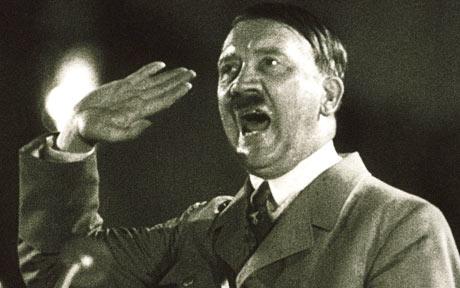 The recording was made on October 25 1956 in a courtroom in Berchtesgaden, site of the Fuehrer's mountaintop home in Bavaria. The court was convened to officially declare the former leader of Nazi Germany dead so that his fortune and rights to his book "Mein Kampf" could be seized by the state government.

Among those giving evidence that day were Otto Guensche, an SS officer, and Heinz Linge, a valet, who first discovered the corpses of Hitler and his new bride Eva Braun.

On the recording, discovered by researchers for the German Spiegel TV channel, the men speak under oath of entering the Fuehrer's study after hearing shots ring out on April 30 1945.

"When I entered to my left I saw Hitler on the sofa," said Linge, who died in 1980.
"Hitler had his head bent forward somewhat and I could see a bullethole approximately the size of a penny on the right side of the temple."

Guensche, who went to his death in 1983 refusing to give details about the dictator's end, said: "Hitler sat on the arm of the sofa with his head hanging down on the right shoulder which was itself hanging limp over the back of the sofa. On the right side was the bullethole."

Martin Bormann, Hitler's secretary, was with them when they first entered Hitler's study, the pair testified.

They arrived at 3.30pm and participated in removing the bodies, carrying them upstairs to the devastated garden of the Reich Chancellery and assisting in their cremation.

Both men were captured by the Soviets after the fall of Berlin and shipped off to Moscow for over a decade. It fuelled the myth which Russian leader Josef Stalin wanted to perpetuate that Hitler might somehow have escaped and was on the run. They came back to Germany in 1955.
The testimony of Guensche and Linge lay hidden in the Munich public records office. Spiegel has restored the recordings to allow them to be heard by scholars and historians.

Jerry E. Smith - The Nazis and the Holy Lance (Subscription)