Saddam (A.K.A. King Nebuchadnezzar II) executed on Eid al-Adha - "The Festival of Sacrifice" 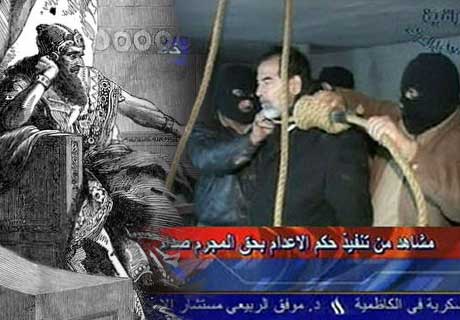 Just a short note on the execution of Saddam. It’s "interesting" (if I can use that word here) that this is done on the Muslim holy-day Eid ul-Adha. This is the Islamic Festival of Sacrifice.

No worries, it's just a coincidence! Geez, talk about ritual!

Well, whoever or whatever it is that receives the life force, the spiritual energy or intent energy of all those please or not, of this ritualistic madness must be proud of a job well done on manipulating the human race to this insane madness!

Executions and other sacrificial rituals like the Islamic Eid al-Adha, the Hebrew Korban, the Christian incessant reminder of Jesus Christ dying on the cross and the bread and wine (body and blood), the Yajna of Hinduism or just some good ol’ stoning" or a more “sophisticated” Texan injection execution are the same crap! So considering the religious and cultural background we have, I guess this stuff isn’t such a far stretch.

Today, in our “modern” cult-ure, this stuff is being played out on prime time TV of course, right in front of our eyes. Well, I don't know about you, but to me it falls within the parameters of so call “satanic ritualistic murder”. No need to go look for freaks in black cloaks out chasing cats to strap up within a pentagram in an underground catacomb somewhere. Nope, this stuff is going on right here on the surface – prime time! With guys in black ski masks doing it, like those in the picture above or seen in the video.

Read more about Eid ul-Adha from wikipedia and also from about.com.

And on a more occult note. Let’s not forget that Saddam allegedly saw himself as the reincarnation of Nebuchadnezzar II. More on that this way.

When they captured Saddam they found him in a "Spider Hole" - with this nice big beard. 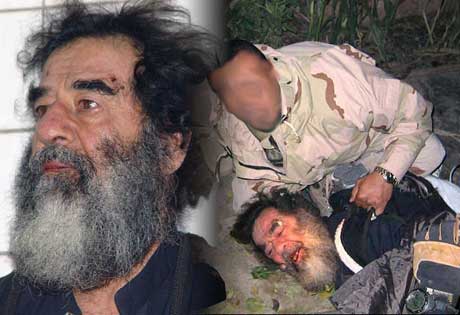 I know it’s a very obscure connection, but there is something about the entire scene that is very similar to the painting of Nebuchadnezzar by William Blake (see below to the right).

Also an interesting issue is the place of his execution, from MSNBC's article: Saddam Hussein executed, ending era in Iraq we can read:

Saddam was executed at a former military intelligence headquarters in Baghdad’s Shiite neighborhood of Kazimiyah, al-Askari said. During his regime, Saddam had numerous dissidents executed in the facility, located in a neighborhood that is home to the Iraqi capital’s most important Shiite shrine — the Imam Kazim shrine.

Then to further confuse things there is always the controversy over whether it’s the real Saddam or not.

Below are two articles that highlight the Eid al-Adha execution thing.

Muslim leaders around the world expressed dismay Saturday that Saddam Hussein was executed at the time of Id al-Adha, an important holiday considered a time of forgiveness and compassion.

Muslim countries often pardon criminals to mark the occasion, and prisoners are rarely executed at that time.

The most important date in the Islamic calendar, Id al-Adha, or Feast of the Sacrifice, honors the biblical patriarch Abraham's willingness to kill his son Isaac for God before God decided to spare Isaac's life.

Id al-Adha also falls during the five- day hajj, the pilgrimage when more than two million Muslims from around the world follow ancient rites at the Islamic holy city of Mecca in Saudi Arabia.

The Saudis were among those criticizing the holding of the execution during Id al-Adha.

"There is a feeling of surprise and disapproval that the verdict has been applied during the holy months and the first days of Id al-Adha," a presenter on the official Al Ikhbariya TV said after programming was broken to read a statement.

"Leaders of Islamic countries should show respect for this blessed occasion," said the statement, which was attributed to the political analyst of the official press agency SPA.

In Indonesia, the world's most populous Islamic nation, the government said it respected the sentence and trial.

"This execution is not surprising as a legal process has been conducted, despite its imperfection, and Saddam Hussein has been given a chance to defend himself," said Desra Percaya, an Indonesian government spokesman. "Indonesia hopes the execution doesn't separate conflicting parties further in the efforts to realize a national reconciliation, which is a requirement for the return of Iraq's sovereignty."

Masdar Mas'udi, a co-chairman of Nahdlatul Ulama, Indonesia's biggest Islamic organization, said the execution was "right by law, but it is not wise."

"People can already predict what the reactions of Saddam's supporters will be," Masdar Mas'udi said. "There may be more bloodshed."

The execution was welcomed in Iran, which fought a war with Iraq in the 1980s. Iran called the hanging a "victory" for the Iraqis, while expressing regrets that the trial only focused on one of Hussein's crimes. "The Iraqi people are the victorious ones," Iranian Deputy Foreign Minister Hamid Reza Asefi told the Islamic Republic News Agency.

The former dictator may become a "martyr" for groups opposed to the U.S. presence in Iraq, said Rohan Gunaratna, the head of Terrorism Research at Singapore's Institute of Defence and Strategic Studies.

"Saddam's execution will contribute to the overall anger and resentment against the coalition forces and the new Iraqi government," said Gunaratna. "Pro-Saddam elements in Iraq will be more angered and will be able to generate more support."

Malaysian Foreign Minister Syed Hamid Albar said Iraq should have listened to the views of the "international community" and commuted the sentence to life imprisonment.

"We are shocked at the execution because of the speed that it was carried out," Syed said in a phone interview today. "The execution is not going to assist in the reconciliation process. In the short run anyway, I think there will be increased tension and an increase in violence."

Iraq's former foreign minister Adnan Pachachi said the timing of Saddam Hussein's execution was questionable as it occurred on the day before Iraq celebrated Id al-Adha. Some other Muslim countries started celebrating the festival Saturday.

The official Saudi Press Agency said there was "a feeling of surprise" that about the timing of the execution.

The holy day "should unite Muslims and bring them together with the millions of pilgrims who are meeting at the holy site of Mecca looking for something to unite them, not for something that sets them apart," the press agency said.

Extreme reaction to the execution may occur outside Iraq, a Pakistani university teacher of international relations said.

"There is a widespread perception that it was a politically manipulated court case and the hanging was done in haste on the eve of Muslim sacred day of Id al-Adha," said Ishtiaq Ahmed, an associate professor of International Relations at Quaid-i-Azam University in Islamabad. "His hanging will further fuel wave of anti-Americanism in Pakistan and in the Muslim world."

Executing Saddam on Eid al-Adha is a Mistake
By Daveed Gartenstein-Ross | counterterrorismblog.org

Saddam Hussein was executed this morning (6:00 a.m. Baghdad time), on Eid al-Adha. The timing of his execution was a mistake. I don't expect a surge in violence in Iraq because pretty much all the remaining Ba'athists there have professed a conversion to radical Islam, and there have been no serious efforts by jihadist factions to condemn the execution. Saddam does have a following among ex-pat Ba'athists in Jordan and Syria, but they don't have the infrastructure to carry out retaliatory attacks.

However, the timing of Saddam's execution has a deleterious effect that is more difficult to measure empirically. Eid al-Adha is one of Islam's two most important holidays, and today throughout the Muslim world the holiday is being overshadowed by Saddam's execution. A source in the Muslim community reports that in Saudi Arabia, some Muslims simultaneously watched the Eid salat on one television channel and Saddam's execution on another. One woman in Saudi Arabia commented that she found this "unsettling," and not because she has any warm feelings for Saddam. Rather, for many Middle Easterners, Saddam's execution seemingly intrudes on what should be a time of celebration for them: it is an intrusion because the Iraq war is extremely unpopular throughout the Middle East, and the televised execution is a stark reminder that the war is still raging. (Reuters also reports on Middle Eastern consternation about the timing of the execution.) The same Muslim source speculates that for other Middle Easterners, the execution may be a painful reminder that they have little recourse against the dictatorial regimes that rule them without the United States. The negative symbolism is heightened by linking the execution to Eid.

One final negative about the timing of the execution is that it may contribute to sectarian divisions in Iraq. Some Sunnis are upset about the execution because Saddam is a Sunni, and they feel that the new Iraq is dominated by Shias. On the other hand, an Iraqi-American source who is in contact with a great deal of people in Iraq tells me that some Shias believe they are "doubly blessed" on Eid al-Adha because of Saddam's execution. So these sectarian divisions are emphasized by the execution's timing.