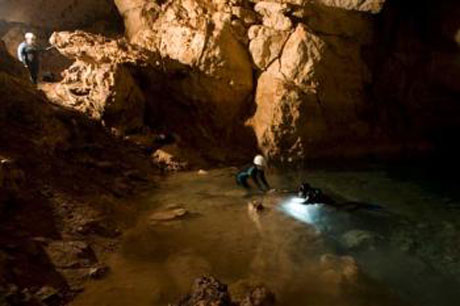 Mexican archaeologist Guillermo de Anda is aided by two young archeologists as he prepares to dive into an underground lake inside a cenote cave in Tzibichen on the Yucatan Peninsula in Mexico, Wednesday, Oct. 2, 2008. Archeologists using long-forgotten testimony from the Inquisition trials of Indian heretics in the 1500's have discovered caves in which ancient Mayas built chambers, altars and underground roads that appear to represent the path that departed spirits had to travel after death. (AP Photo/Dario Lopez-Mills)


Legend says the afterlife for ancient Mayas was a terrifying obstacle course in which the dead had to traverse rivers of blood, and chambers full of sharp knives, bats and jaguars.

Now a Mexican archaeologist using long-forgotten testimony from the Spanish Inquisition says a series of caves he has explored may be the place where the Maya actually tried to depict this highway through hell.

The network of underground chambers, roads and temples beneath farmland and jungle on the Yucatan peninsula suggests the Maya fashioned them to mimic the journey to the underworld, or Xibalba, described in ancient mythological texts such as the Popol Vuh. 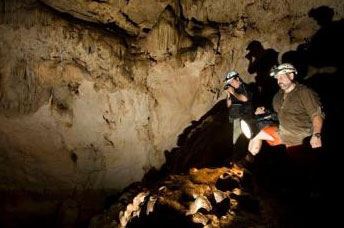 Searching for the names of sacred sites mentioned by Indian heretics who were put on trial by Inquisition courts, De Anda discovered what appear to be stages of the legendary journey, recreated in a half-dozen caves south of the Yucatan state capital of Merida.

Archaeologists have long known that the Maya regarded caves as sacred and built structures in some.

But De Anda's team introduced "an extremely important ingredient" by using historical records to locate and connect a series of sacred caves, and link them with the concept of the Mayan road to the afterworld, said archaeologist Bruce Dahlin of Shepherd University, who has studied other Maya sites in the Yucatan. 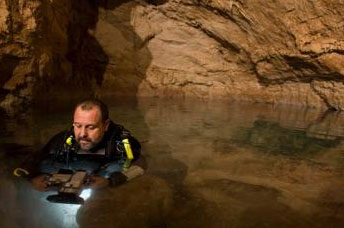 "The Associated Press followed de Anda and his team into the caves, squeezing through tiny, overgrown entrances and rappelling down narrow shafts and slippery tree roots.

There, in the stygian darkness, a scene unfolded that was eerily reminiscent of an "Indiana Jones" movie — tottering ancient temple platforms, slippery staircases and tortuous paths that skirted underground lakes littered with Mayan pottery and ancient skulls.

The group explored walled-off sacred chambers that can only be entered by crawling along a floor populated by spiders, scorpions and toads. 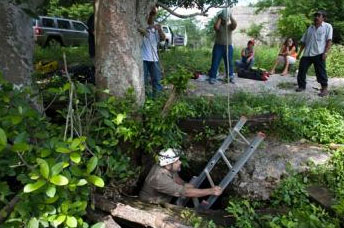 The Spanish were outraged that the Mayas continued to practice their old religion even after the conquest. So they used the trials to make them reveal the places where they performed their ceremonies.

Time after time, the defendants mentioned the same places — but the recorded names changed over the centuries or were forgotten.

Armed with clues from trial records, the archaeologists asked locals for caves with similar-sounding names or coordinates that would place them nearby.

The Mayas used the sinkhole caves, known as cenotes, as places of worship and depositories for sacrificed humans. Many cenotes still contain pools that supply villages with water. The best-known is the broad, circular pool at the ruins of Chichen Itza.

The cenotes De Anda found were drier, better hidden and farther from villages. They seem to have had a special religious significance because even as the Maya were forced to convert to Christianity, they still traveled long distances to worship there.

Among De Anda's discoveries are a broad, perfectly paved, 100-yard underground road, a submerged temple, walled-off stone rooms and the "confusing crossroads" of the legends.

"There are a number of elements that make us think that this road is a representation of the journey to Xibalba," De Anda said. "We think it is no coincidence that the road which comes out of the crossroads leads to the west," the direction described as the way to the afterlife.

At the center of one of the underground lakes, De Anda's team found a collapsed and submerged altar with carvings indicating it was dedicated to the gods of death.

In some of the chambers, it is almost impossible to move without slashing one's skin on stalactites and stone formations projecting from the walls and ceilings, leading De Anda to believe they are a representation of the feared "room of knives" described in the Popol Vuh.

Bats are depicted in the ancient texts, and visitors have to duck to avoid swarms of them. There's the "chamber of roasting heat" which indeed leaves visitors soaked in sweat. Cool currents of surface air penetrating some caves feel almost frigid, just like the legend's "chambers of shaking cold."

While De Anda has not yet encountered a specific "jaguar chamber," jaguar bones have been found in at least one cave.

Subterranean "roads" interrupted by deep pools of water may signify the rivers of blood and pus. 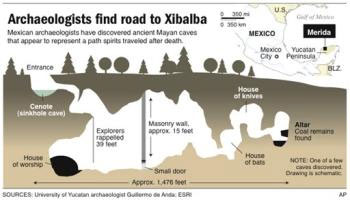 But why go to the trouble of reproducing hell? "Perhaps it was to demonstrate power," De Anda speculates, or to give the living an idea of the terrors they would meet en route to paradise.

Clifford Brown, a Florida Atlantic University archaeologist who has worked in the region, agrees that the Mayas saw the cenotes as a portal to the underworld.

"Everybody has heard of the cenote of sacrifice at Chichen Itza, but it's less widely recognized that it was part of a generalized cenote worship that existed at many sites," Brown said.

"There are a number of sites in the lowlands where there are caves right underneath the principal temples, palaces and pyramids, which are thought to represent a religious 'access mundi,' where you have the pyramid representing the heavens, and the caves representing the underworld underneath."