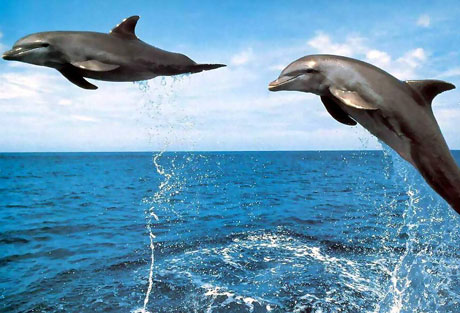 Scientists have finally unravelled the meaning of squeaks and whistles that make up dolphin "speech".

According to the Australian researchers who have picked up "dolphinese", the language shows the animals are more similar to humans that previously thought.

The scientists identified almost 200 different whistles that the dolphins make to communicate, and linked some to specific behaviours.

Biologist Dr Liz Hawkins and her colleagues listened to the chatter of wild bottlenose dolphins off the western coast of Australia for three years.

Dr Hawkins, of the whale research centre at Southern Cross University, New South Wales, said: "This communication is highly complex, and it is contextual, so in a sense it could be termed a language."

Dolphins were known to use "signature" whistles to identify themselves to others, but the meaning of the other whistles they make was a mystery.

The biologist, who presented her work at a meeting of the Society for Marine Mammalogy in Cape Town, grouped all the whistles into five tonal classes and found that these groups, and even individual whistles, clearly went with different behaviours.

Dr Melinda Rekdahl, of the University of Queensland in Brisbane, said it was too early to know whether whistles might mean something specific, but added: "It is possible. Dolphin communication is much more complicated than we thought."

The research, the scientists claim, will lead to a reassessment of the social complexity of dolphins, raising moral questions over how those kept in captivity should be treated.