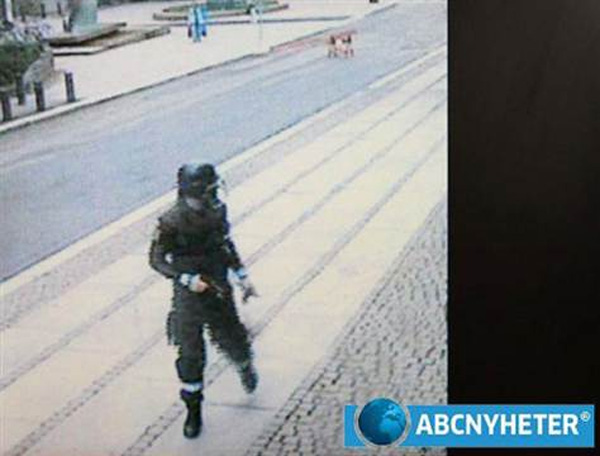 The image shows Anders Behring Breivik in police uniform with a riot helmet and armed with a pistol. On July 22, Breivik exploded a car bomb that killed eight people in Oslo’s government district and then drove to the island of Utoya where he went on a shooting spree, killing 69 at a Labor Party youth camp.

It was unclear how the image was acquired by ABC Nyheter. The Internet news service declined to provide information.

"The picture was taken by a monitoring camera in the government building," Hansen told the AP. "It was enclosed in a confidential police report which had been given to lawyers assisting survivors and relatives of the victims."

Image not released by police

Hansen said the image had not been released by the police, but declined further comment.

About 500 lawyers are representing the victims and survivors of the July attacks. It was unclear how many of them had access to the police report.

Breivik faces his third session in court Sept. 19 when jurors will decide on the extension of his detention and whether he will still be held in isolation.

Previous sessions have been held behind closed doors. Oslo District Court ordered an open hearing for Monday but an appeals court overruled the decision at the request of the police.

Breivik is being held in isolation — which he has described as "a sadistic torture method" — though he has access to books, movies and a computer that is not connected to the Internet.

Breivik, 32, has admitted to the killings but denies criminal guilt because he believes the massacre was necessary to save Norway and Europe. He said in a 1,500-page manifesto posted online before the attacks that they are an attempt at cultural revolution, aimed at purging Europe of Muslims and punishing politicians that have embraced multiculturalism.

If convicted of terrorism charges, Breivik would face up to 21 years in prison. An alternative custody arrangement, if he was still considered a danger to the general public, could keep him behind bars indefinitely.
The actual trial isn’t expected to start until next year.