Our Glorious Leader Donald Trump has become a global symbol of White resistance to the international Jew machine.

God bless our friends in Serbia, who stand in solidarity with our struggle.

Serb bros – we are in solidarity with you as well.

Vice President Biden received a cold welcome Tuesday in Belgrade, Serbia, as hundreds of ultranationalists marched through the city chanting “Vote for Trump!”

Biden was in Serbia in a bid to encourage the country’s government to normalize relations with Kosovo, which split away from Serbia in 1999 and claimed independence in 2008.

However, the embittered 2016 U.S. presidential race — and perhaps Biden’s history of support for the NATO bombing of Serbia in the 1990s — prompted self-described radicals onto the street.

I’m pretty sure you don’t have to be a radical unltranationalist to oppose your country being bombed, WaPo.

While the protesters were kept far from the area of Belgrade that Biden was visiting, they still created a spectacle, wearing white T-shirts with Donald Trump’s face on them and chanting the Republican candidate’s name.

“Trump is the alternative to globalization. He will destroy old centers of power in the United States and he is a supporter of Russia,” Vojislav Seselj, head of the ultranationalist Serbian Radical Party, told Reuters reporters at the scene. Seselj, who was acquitted in March of war crimes by a U.N. tribunal, also said that Serbian Americans should vote for Trump.

In the most recent parliamentary election, the Serbian Radical Party won 22 seats out of 250 in the Serbian National Assembly with about 8 percent of the vote. In the past, Seselj’s party has aligned itself with other controversial figures, including Libya’s Moammar Gaddafi.

It is truly glorious, what Donald Trump has done for our race. 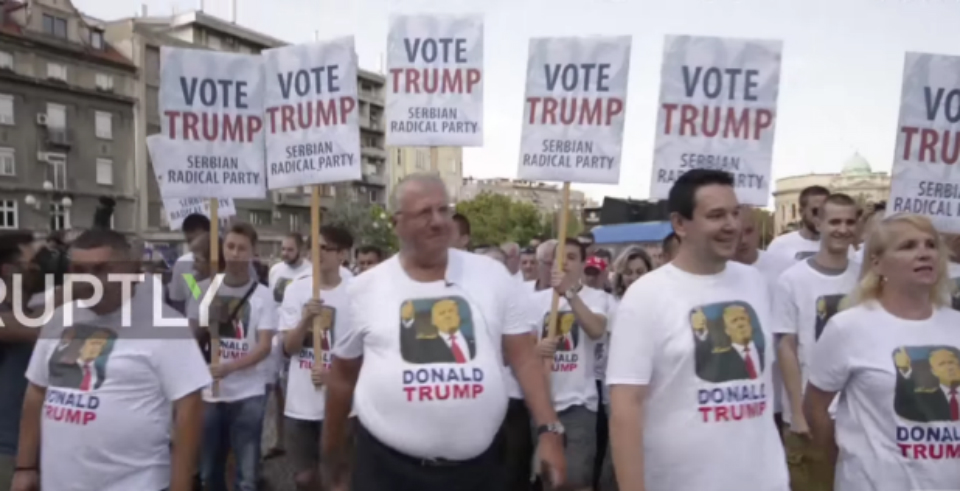