Mar 23, 2007 Source: science.nasa.gov
It's official: Solar minimum has arrived. Sunspots have all but vanished. Solar flares are nonexistent. The sun is utterly quiet.

This week researchers announced that a storm is coming--the most intense solar maximum in fifty years. The prediction comes from a team led by Mausumi Dikpati of the National Center for Atmospheric Research (NCAR). "The next sunspot cycle will be 30% to 50% stronger than the previous one," she says. If correct, the years ahead could produce a burst of solar activity second only to the historic Solar Max of 1958. 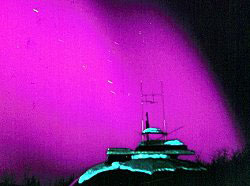 Intense auroras over Fairbanks, Alaska, in 1958. [More]That was a solar maximum. The Space Age was just beginning: Sputnik was launched in Oct. 1957 and Explorer 1 (the first US satellite) in Jan. 1958. In 1958 you couldn't tell that a solar storm was underway by looking at the bars on your cell phone; cell phones didn't exist. Even so, people knew something big was happening when Northern Lights were sighted three times in Mexico. A similar maximum now would be noticed by its effect on cell phones, GPS, weather satellites and many other modern technologies.

Dikpati's prediction is unprecedented. In nearly-two centuries since the 11-year sunspot cycle was discovered, scientists have struggled to predict the size of future maxima—and failed. Solar maxima can be intense, as in 1958, or barely detectable, as in 1805, obeying no obvious pattern.

The key to the mystery, Dikpati realized years ago, is a conveyor belt on the sun.

We have something similar here on Earth—the Great Ocean Conveyor Belt, popularized in the sci-fi movie The Day After Tomorrow. It is a network of currents that carry water and heat from ocean to ocean--see the diagram below. In the movie, the Conveyor Belt stopped and threw the world's weather into chaos.

"The top of the conveyor belt skims the surface of the sun, sweeping up the magnetic fields of old, dead sunspots. The 'corpses' are dragged down at the poles to a depth of 200,000 km where the sun's magnetic dynamo can amplify them. Once the corpses (magnetic knots) are reincarnated (amplified), they become buoyant and float back to the surface." Presto—new sunspots! 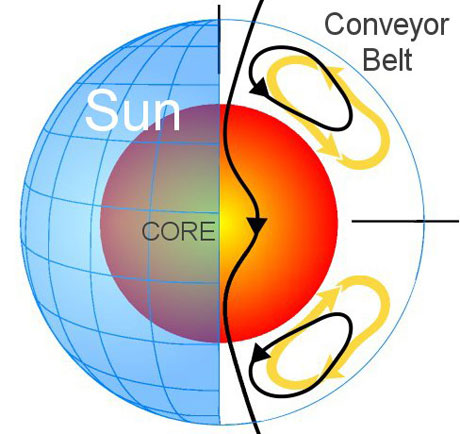 The sun's "great conveyor belt."
All this happens with massive slowness. "It takes about 40 years for the belt to complete one loop," says Hathaway. The speed varies "anywhere from a 50-year pace (slow) to a 30-year pace (fast)."

When the belt is turning "fast," it means that lots of magnetic fields are being swept up, and that a future sunspot cycle is going to be intense. This is a basis for forecasting: "The belt was turning fast in 1986-1996," says Hathaway. "Old magnetic fields swept up then should re-appear as big sunspots in 2010-2011."

Like most experts in the field, Hathaway has confidence in the conveyor belt model and agrees with Dikpati that the next solar maximum should be a doozy. But he disagrees with one point. Dikpati's forecast puts Solar Max at 2012. Hathaway believes it will arrive sooner, in 2010 or 2011.

Who's right? Time will tell. Either way, a storm is coming.