Apr 12, 2013 Source: inquisitr.com
A Soviet spacecraft may have been spotted on Mars by NASA’s Mars Reconnaissance Orbiter (MRO). Space fans from Russia scanned NASA images to discover the spacecraft’s remains.

The craft landed on Mars in 1971, but mysteriously stopped working. The craft, Mars 3, worked for just 15 seconds before it stopped communications. 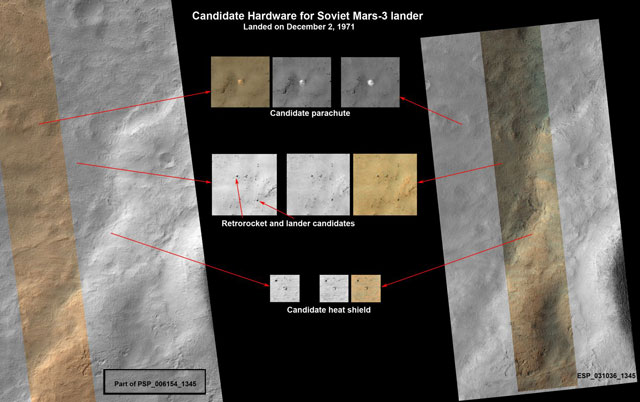 Image released by NASA shows a set of pictures taken by NASA’s Mars Reconnaissance Orbiter showing what may be parts of a Soviet spacecraft that landed on Mars in 1971. Altered for size. To see full image, click here.

It was part of a double mission launched by the Soviet Union in 1971. Mars 3′s twin craft, Mars 2, crashed on arrival at the Red Planet.

Photos by NASA’s MRO appear to show the Mars 3 lander and its parachute, heat shield, and other hardware. It jettisoned the majority of its hardware while landing.

The Russian space fan group has followed the Curiosity rover, NASA’s latest project on Mars. At the group’s request, NASA flew the MRO over an area earlier this year that was thought to be the Mars 3 craft’s landing spot. The resulting pictures show features consistent with a spacecraft landing.

But scientists have cautioned the group not to guarantee the find yet. The formations discovered in pictures could simply be rocks or other geological formations. There are plans to talk to Russian engineers about the mission and take more pictures of the Soviet spacecraft’s suspected landing spot.

Read the full article at: inquisitr.com