Steve Jobs: LSD Was One of The Best Things I’ve Done in My Life 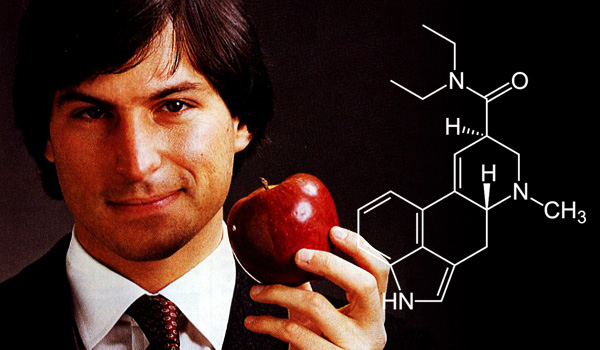 The legacy of the legendary Apple genius is quickly being drafted by a worshipful worldwide media. But most obituaries omit his longtime love for LSD.

The death of Steve Jobs, the legendary co-founder and CEO of Apple, appears to have touched people around the world in a deeply personal way. Photos of memorials —from the makeshift to the high-tech; from Palo Alto, Calif., where he lived, to Pakistan and Peru—are circulating on millions of MacBooks and iPads and iPhones and other revolutionary products that he designed and retailed with such genius. Today his face is everywhere, his rags-to-riches saga retold, his entrepreneurial impact on the tech industry classed with the likes of Thomas Edison and Henry Ford. The media is already drafting his legacy, tossing out wise and witty things he said over the four fearless decades of his career. One of the most meaningful to us at The Fix was what he said in a commencement address at Stanford University in 2005, a year after his cancer diagnosis: "Your time is limited, so don’t waste it living someone else’s life. Don’t be trapped by dogma—which is living with the results of other people’s thinking. Don’t let the noise of others’ opinions drown out your own inner voice. And most important, have the courage to follow your heart and intuition.…Your work is going to fill a large part of your life, and the only way to be truly satisfied is to do what you believe is great work. And the only way to do great work is to love what you do. If you haven’t found it yet, keep looking. Don’t settle."

But equally suggestive, at least to us, is a quote from Steve Jobs to New York Times reporter John Markoff, who interviewed him for his 2005 book What the Doormouse Said: How the Sixties Counterculture Shaped the Personal Computer. Speaking about his youthful experiments with psychedelics, Jobs said, "Doing LSD was one of the two or three most important things I have done in my life." He was hardly alone among computer scientists in his appreciation of hallucinogenics and their capacity to liberate human thought from the prison of the mind. Jobs even let drop that Microsoft’s Bill Gates would "be a broader guy if he had dropped acid once." Apple’s mantra was"Think different." Jobs did. And he credited his use of LSD as a major reason for his success.

The Origin of the Apple Logo