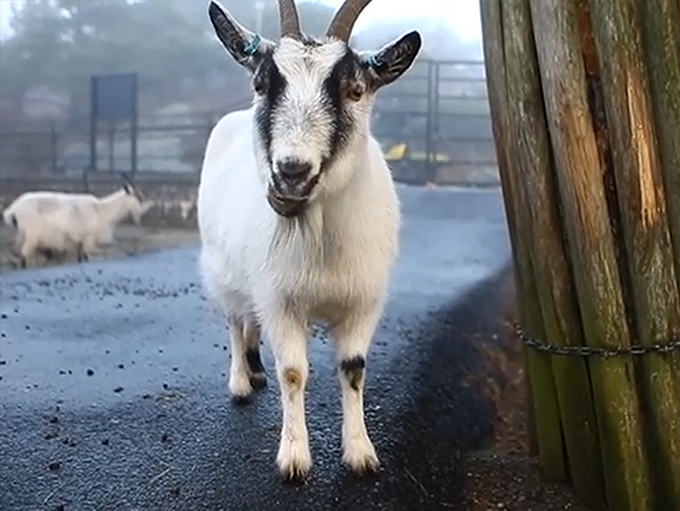 Editor's comment: I bet the authorities are scratching there heads on this one. It's very difficult to figure out whom might be responsible, especially since goat raping is such a big part of Swedish culture. I bet they will be looking for a tall pale Swede to solve this case.

These likley suspects are also doing unspeakable acts on other animals, including raping a Donkey . They also are going after the Whiter looking Yazidi children, just like they are in Sweden and Germany and many other European countries. This is madness.

A goat was kidnapped Sunday night from Slottsskogens Zoo in Gothenburg, and it was then subjected to abuse and rape.

It had been abused, burnt, and we also found injuries in the vagina, says Per Åberg, who is head of the zoo.

It was when the animals were counted on Monday morning the zoo staff discovered that a goat was missing. They searched everywhere without finding the goat.


After a while the staff got a tip from visitors who seen a goat nearby, and it was found, abused and raped.

The mixture of injuries and abuse was so severe that it had to be killed.

- This has occurred at night or early in the morning, it was discovered only a few hours later. They had to call the vet and the vet had to put the goat down, says police spokesman Peter Adlersson to the Swedish newspaper Nyheter Idag.

No one has yet been arrested for the macabre cruelty, and that goats are kidnapped and subjected to rape is not something they have heard of before at the Gothenburg police station.

- Horses that have been abused happens every now and then, but this was something new I have to say, says Adlersson.

Adlersson says the police has secured evidence from the the goat, and hopes that there may be witnesses who were near Slottsskogen Zoo during Sunday night or during the early morning hours. Witnesses are asked to contact the police.

- We hope someone have seen something and contact us, he says.

The police does not want to reveal what the evidence is.

- No, not now, it would be good to keep it to ourselves if we get hold of a perpetrator.

We can only guess. Goat raped... Hmm, evidence, what could that be.

Who could be this cruel to a baby animal?
From: thelocal.se

A baby goat missing from an animal park in west Sweden has been found. But zoo keepers say the kid was so badly injured in a violent sex attack that they had to ask vets to put it down.

The young animal, which had not yet been given a name by staff at the Slottsskogen animal park in Gothenburg, was known simply as "the little white goat". But it was nowhere to be seen when workers did their regular Monday morning count this week.

As they scoured nearby green spaces and woodland, a visitor ended up discovering the injured goat in a remote area of the park. The animal had been burned and had sustained severe wounds that indicated it had been raped. Staff at the park called in vets who put the goat to sleep.

"It's awful, it hurts your whole body, when you hear about people doing these kind of things," Per Åberg, a spokesperson for Slottskogen, told The Local on Tuesday.

"We have contacted police but they have got a hard job to find the kind of person who does things like this," he said.

Åberg said that staff would spend Tuesday investigating how to step up security at the park, which opened in 1874 and is popular with both local families and tourists.

It includes a children's zoo and is home to a number of projects designed to preserve species native to the Nordic region that are under threat, including the rare Humbolt penguin.

Many of the animals, including goats, elk, sheep and ponies are usually allowed to roam freely in the attraction's vast grassy areas. But Åberg suggested that some of the park's animal residents would be locked inside their enclosures overnight while investigations continued.
Story continues below…

"It is a heavy day, it is sad, but we must manage and we must go on – because we have a lot of animals that we must take care of," he said.

"We have a lot of good things going on in the animal park and we want to keep fighting and so that more visitors can come to see them (...) It's a very educational place or you can just to come to relax," he told The Local.

Additional sources for this story: