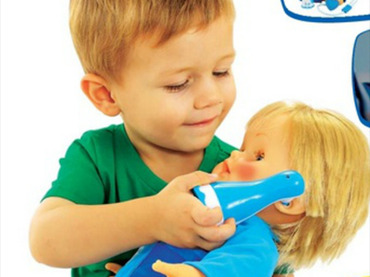 One of the largest toy chains in Sweden published a gender-neutral Christmas catalogue, which pictured boys playing with dolls and girls holding toy machine guns. The move has reignited a debate in Sweden over the proper place of gender roles.

Top Toy has produced children’s Christmas catalogues in Denmark and Sweden for both Toys R Us and BR. Though the catalogues’ page layouts are the same in both countries, the gender of the pictured kids is reversed in the Swedish edition.

"With the new gender thinking, there is nothing that is right or wrong. It’s not a boy or a girl thing, it’s a toy for children," Top Toy director of sales Jan Nyberg told TT news agency.

The Danish catalogue showed a boy wielding a toy machine gun, which was replaced by a girl in the Swedish version. The "Hello Kitty" page of the Swedish catalogue also replaced a girl with a boy, and a one girl’s pink t-shirt was turned into light blue. 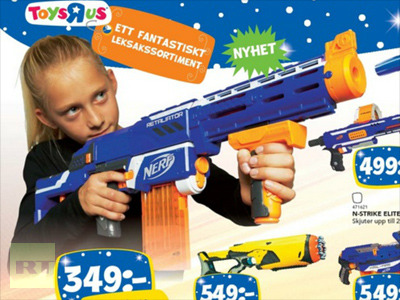 The move is a profound shift in strategy for Top Toy. In 2008, the company was criticized by Swedish advertising watchdog Reklamombudsmannen (RO) for encouraging outdated gender roles with catalogues that featured boys dressed as superheroes and girls as princesses.

Since then, Top Toy has modified its strategy based on RO’s advice.

"We have produced the catalogues in a completely different way this year," Nyberg said. "For several years, we have found that the gender debate has grown so strong in the Swedish market that we… have had to adjust." 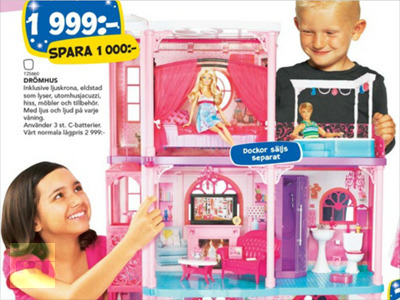 Since 2008, the government has spent 110 million Swedish crowns ($16.3 million) on promoting gender equality in schools, including the introduction of laws requiring teachers to actively work to reverse gender stereotypes.

The country also proposed a new single gender-neutral pronoun – ’hen’ – to replace ’he’ and ’she’ in order to minimize gender stereotyping.

In January 2012, children’s author Jesper Lundqvist’s release ’Kivi and Monster Dog,’ a book that uses ’hen.’ The move sparked debate in Sweden and worldwide about the proper place of gender roles.

Elise Claeson, a columnist and a former equality expert at the Swedish Confederation of Professions, claimed that the use of the word hen is an example of notions of gender equality going too far.

Claeson argues that mixed messages about their gender can be harmful for kids: "It is important to have your gender confirmed to you as a child. This does not limit children; it makes them confident about their identity,” she told the Christian Science Monitor.