Symbolic cathedral made of cardboard unveiled

Aug 16, 2013 By Henrik Palmgren | redice.tv
A famous landmark church, among many other buildings, was destroyed in New Zealand during Christchurch’s devastating 2011 earthquake. Now in 2013, a replacement cathedral has been erected and unveiled and it’s drawing attention due to its unique design.

The new $6 million cathedral, constructed in a massive triangle configuration, is composed mainly of cardboard. 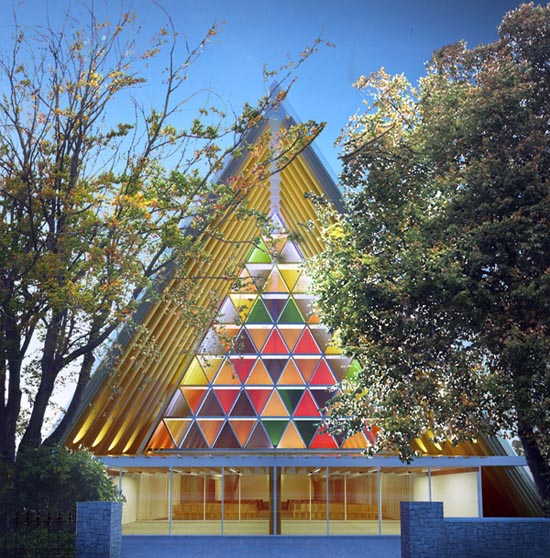 The design is unorthodox, as reported by NewScientist:

Made from 98 giant cardboard tubes, the new Transitional Cathedral will hold 700 worshippers and is designed to last for up to 50 years – until a more permanent replacement can be built. The tubes are coated with three layers of waterproof polyurethane and most are sheltered by the polycarbonate roof, which is translucent and so glows when the cathedral is lit at night.

The cathedral was designed by Shigeru Ban, a Japanese architect who has been building with cardboard since 1986. Since then, Ban has designed everything from an art museum in Metz, France, to emergency accommodation following the Japanese earthquake and tsunami.

He says the new cathedral is earthquake-proof, fireproof and won’t get soggy in the rain. "The strength of the materials is unrelated to the strength of the building," he told the Japan Times. "The first time I used paper was for an interior, but I realised it was strong enough to be used as a structural element – to actually hold up the building." He says wood and paper can withstand quakes that would destroy concrete structures.

The design is supposed to provide strength under tension, and has been erected with earthquakes in mind. Cardboard constructions are flexible, and absorb the energies that might otherwise cause collapse in other traditional buildings.
The base of the cathedral is heavy concrete, and the structure is lent support through wooden beams.

In 2012 church spokesman Reverend Craig Dixon said, "I think this building has the potential to become an icon in its own right."

The new cathedral is across the street from the Canterbury Television (CTV) building. The earthquake destroyed the building and 185 people were killed.

Richard Gray, chairman of the cathedral project said, "It’s very symbolic that it’s across the road from the CTV building. It’s very poignant."

Not only will it mark the area where so many lost their lives, but the pyramid/triangle glass front reflects the structural strength and simplicity of the three-sided shape.

The triangle has as many meanings attributed to it as you can count, but it is a powerful symbol used often.

According to "Alternative Religions":

In Western society, the triangle most often has highly Christian meanings when used in a religious context. Because the Christian God is a trinity - Father, Son and Holy Ghost united in a single godhead – he is commonly represented by a triangle.

As a three-sided polygon, the triangle represents the number three, which is meaningful to many groups. As such, triangles and other symbols made of three parts may be used to present such concepts as past, present, and future or spirit, mind and body.

As a Summoning Symbol
Some occultists use the triangle as a summoning symbol. At the culmination of a ritual, the desired being is expected to appear within a triangle inscribed upon the floor. The occultist often performs his ritual from the protection of a circle.

Point-up and Point-down Triangles
The orientation of a triangle can be important to it’s meaning. For example, a point-up triangle might represent a strong foundation or stability, as it is rooted to the ground through a solid base.

Dubbed the ’Transitional Cathedral’, the church is meant to be temporary until a newer, more permanent place of worship is built. However, the new constructions must keep earthquakes in mind, as New Zealand lies in the Ring of Fire, the" area where a large number of earthquakes and volcanic eruptions occur". The chances of destructive seismic activity happening again in Christchurch are great.

Tune into Red Ice Radioto hear guests speak on sacred architecture and geometry, geomancy, and the significance of math, shapes, and alignments: