Apr 17, 2012 Source: news.yahoo.com
A famous church in New Zealand that was destroyed in an earthquake last year will be replaced by a cathedral made of cardboard.

Anglican leaders in the city of Christchurch say the proposed 82-foot-high cathedral, made of 104 tubes of cardboard, will cost upward of $4.1 million, will house 700 people, and is expected to stay in place for around 10 years, according to the Associated Press. Concrete and wood will be used to give the cathedral structural support.

"I think this building has the potential to become an icon in its own right," said church spokesman Rev. Craig Dixon. "I think it will be greatly loved for a long time." 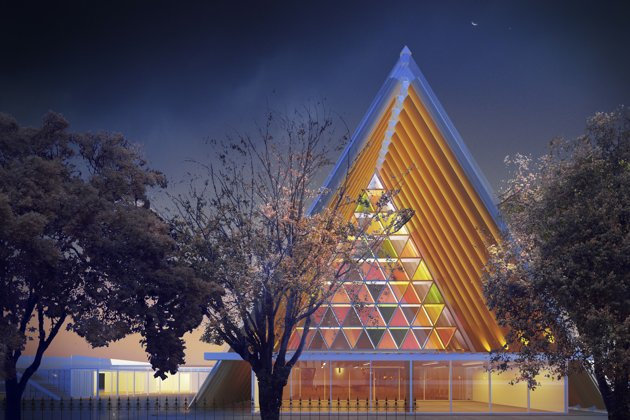 In last year’s earthquake, the famous ChristChurch Cathedral was destroyed along with much of the city’s downtown. In the disaster, 185 people were killed.

The cathedral will be built across the street from where the Canterbury Television (CTV) building collapsed during the quake.

"It’s very symbolic that it’s across the road from the CTV building. It’s very poignant," said Richard Gray, who is chairman of the group organizing the cardboard cathedral project.

The Transitional Cathedral is a symbol of hope for the future of this city as well as being sustainable and affordable," Gray told the Star.

Construction is expected to begin in about six weeks, but the cathedral’s designers are still waiting for official approval from the city before formally beginning construction. They expect the structure will be completed by the end of 2012. Despite being made of paper, the cathedral will be weatherproof and fire-resistant.

Around two dozen shipping containers will be placed inside the cathedral to be used for offices, kitchen space and storage.