Synthetic alcohol pill lets you get drunk without the hangover

Nov 13, 2013 By Henrik Palmgren | redice.tv
In a similar vein as the ’Alcohol Spray’ that intoxicates the user with a single pump, more on the neverending quest to get drunk as quickly, and with as little effort, as possible... 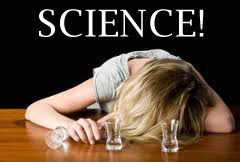 Synthetic alcohol gets a buzz going without full intoxication, and no hangover.

The "synthehol" used by space explorers on Star Trek may soon be a reality.

A scientist at Imperial college London has identified molecules that reproduce the pleasurable effects of alcohol without causing a hangover the next day.

The pill also prevents intoxication, meaning drinkers could throw back several beers feeling only a mild buzz from beginning to end.

David Nutt, a professor of neuropsychopharmacology, said the new drug targets GABA, a chemical produced by the brain, and produces the same effects as alcohol. The drug selectively effects the GABA receptors, avoiding other brain receptors which lead to the undesirable effects of a night out drinking.

“There’s no question that you can produce a whole range of effects like alcohol by manipulating this system in the brain,” said Nutt. "In some experiments, the effect is indistinguishable from alcohol."

Nutt said that this could have an effect on public health as the drug could be used to block receptors, allowing drinkers sober up. Clever molecule modelling could also eliminate the risk of addiction associated with drinking.

Read the full article at: upi.com