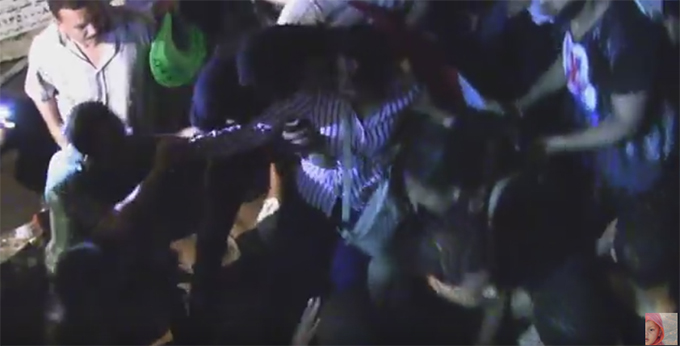 A shocking video out of Egypt which shows a woman being dragged away by a group of Muslim men before she is brutally raped is an example of ‘Taharrush’ – the rape culture that is now being imported to the west via the migrant wave.

The clip shows a blond-haired woman being set upon by a violent mob during protests against Egyptian President Mohamed Morsi in Tahrir Square on June 30, 2013. She is heard screaming before being pushed to the floor and, according to Egyptian journalist Dina Zakaria, was then viciously molested.

The woman, later identified as a Dutch journalist, was taken to hospital with severe injuries. She was subsequently repatriated to the Netherlands.

What we are seeing in the video is an example of ‘Taharrush’ – where gangs of men attack, assault, rob and in some cases rape women. The phenomenon is a particular problem in North African countries during public demonstrations or festivities.

Mass sexual assaults in Cologne and numerous other cities across the continent on New Year’s Eve committed by Arab men illustrate how ‘Taharrush’ is now being imported by European countries as a consequence of the ‘refugee’ red carpet.

“In Egypt, sexual harassment is widespread and touches the lives of the majority of women whether on the streets, in public transportation, or at the work place, the super market, or political protests,” reports online journal Jadaliyya, adding that even Muslim women who wear the veil are targeted.

CBS reporter Lara Logan was infamously molested by up to 200 men in the same location – Tahrir Square – during the 2011 uprising in Egypt. Logan was sexually assaulted so violently that she thought she was going to die.

Although mass molestations by migrants are clearly connected to the fact that Islam treats women as second class citizens, authorities in Europe are still almost completely ignorant to the problem. Vienna’s chief of police echoed comments made by Cologne Mayor Henriette Reker when he advised Austrian women not to go out at night alone.

Meanwhile, it’s emerged that the Syrian ISIS supporter who attempted a jihadist attack on a police station in Paris last week had previously been arrested for sexually assaulting women in Cologne and may even have been involved in last month’s attacks on New Year’s Eve.