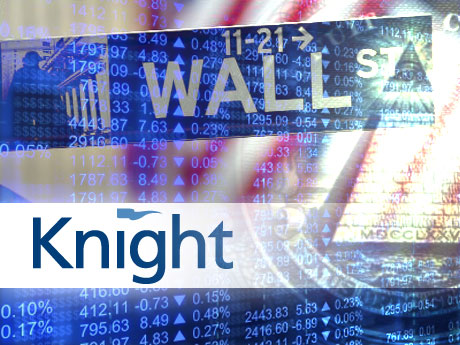 In the biggest reshaping of the financial industry since the Great Depression, two of Wall Street's most storied firms, Merrill Lynch & Co. and Lehman Brothers Holdings Inc., headed toward extinction.

New York-based Lehman, founded 158 years ago, said early today that it plans to file for Chapter 11 bankruptcy protection after failing to find a buyer. Merrill Lynch, 94 years old and also based in New York, agreed to sell itself to Bank of America Corp. for $50 billion in an emergency deal hashed out yesterday.

``The tectonic plates beneath the world financial system are shifting, and there is going to be a new financial world order that will be born of this,'' said Peter Kenny, managing director at Knight Capital Group Inc., the Jersey City, New Jersey-based brokerage that handles about $1 trillion worth of stock transactions a quarter. ``It's an ugly and painful process.''

The engines that powered record growth in the financial industry over the last decade -- cheap credit and surging property values -- have been thrust into reverse. Companies that once thrived on making real estate loans and holding assets bought with borrowed money are now under siege, giving the upper hand to those less reliant on leverage and holding the fewest assets tied to property.

The industry convulsions that started last year have already eliminated Bear Stearns Cos., forced into a cut-price sale to JPMorgan Chase & Co. with government support in March. A week ago, the U.S. Treasury placed mortgage companies Fannie Mae and Freddie Mac into conservatorship, guaranteeing their widely held debt securities while all but erasing their equity value.

American International Group Inc., once the world's largest insurer, is struggling to raise cash to avoid a credit-rating downgrade that could cripple its business.

From Five to Two

The five New York-based securities firms that dominated Wall Street have been reduced to two: Goldman Sachs Group Inc. and Morgan Stanley. While both firms are scheduled to report a drop in third-quarter earnings this year, their business has remained profitable throughout 2008 -- unlike Lehman and Merrill.

``I think highly of Morgan Stanley and Goldman Sachs, so I expect them to ride this out,'' Evercore Partners Inc. Chief Executive Officer and Former Deputy Treasury Secretary Roger Altman said in an interview on CNBC. ``But as to whether we've seen the last of this crisis, I think the answer to that is clearly no. And exactly where it goes from here and how it unfolds, I'm unsure.''

Lehman, which employed 25,935 people at the end of August in 61 offices around the world, had a balance sheet totaling $786 billion as recently as February. Merrill Lynch, with 60,000 employees, is known for its ``thundering herd'' of financial advisers that brought Wall Street financial products to Main Street investors.

``I've been on Wall Street for many years, and I've never seen a weekend like this one,'' said Michael Holland, 64, chairman and founder of New York-based Holland & Co. ``We are unwinding what has been years of silliness in the financial markets, and the silliness is being vaporized as we speak, unfortunately with the stock price of a number of companies involved in it.''

To help cushion the fallout, 10 banks created a $70 billion fund to lend to firms that are having trouble financing their assets in the markets. The Federal Reserve also said it will be willing to lend money in return for a wider array of collateral including stocks.

Still, the repercussions may be widespread.

Meredith Whitney, an analyst at Oppenheimer & Co., wrote in a note to investors that sales of Lehman's assets will push down the value of securities, forcing other firms to write down their own holdings.

Nouriel Roubini, an economics professor at New York University, said the independent securities firm model is ``fundamentally flawed'' and that every securities firm will need to combine with a bank to gain a deposit base and greater access to loans from the Federal Reserve.

Just five months ago, Lehman Brothers Chief Executive Officer Richard Fuld, 62, was telling shareholders that ``the worst is behind us'' in the credit contraction. As concerns escalated about the value of Lehman's assets tied to residential and commercial real estate, Fuld replaced Chief Financial Officer Erin Callan and President Joseph Gregory in June.

Deteriorating markets put more pressure on the value of Lehman's assets and the firm, unable to negotiate an investment from the Korea Development Bank, instead tried to reassure investors last week by revealing third-quarter results early and unveiling a plan to sell part of its fund management unit and create a separate unit for its real estate holdings.

Fuld's efforts were undermined on Sept. 10, when Moody's Investors Service put Lehman's credit rating on review for downgrade, noting that the firm needed a ``strategic transaction with a stronger financial partner'' to help support its rating.

Lehman's stock fell 50 percent on Thursday, Sept. 10 and Friday, Sept. 11 and the collapse spread to Merrill, which has reported four consecutive quarters of losses and was expected to lose money again this quarter.

New York Federal Reserve President Timothy Geithner called a meeting of Wall Street's top firms starting at the Fed's downtown headquarters that began at 6 p.m. on Friday, with a goal of helping ease a sale of Lehman, according to people familiar with the situation.

The two banks most interested in Lehman, London-based Barclays Plc and Charlotte, North Carolina-based Bank of America, balked at a deal unless the government would protect it from any losses on some of the hardest-to-value assets. The government, already shaken by criticism of its actions to support Bear Stearns, Fannie Mae and Freddie Mac, refused to budge and tried to persuade the CEOs of the biggest Wall Street firms to pitch in instead.

The talks lasted through the weekend, with groups of executives breaking off into smaller groups to discuss options and teams of traders examining positions at every major firm. Yesterday, Barclays, the U.K.'s third-biggest bank, dropped out, deciding it couldn't agree on a deal so quickly without some type of protection from losses.

As hopes dimmed for salvaging Lehman, attention turned to the future of Merrill, Lehman's bigger rival. That business, with its 16,690 financial advisers and nearly half of fund manager BlackRock Inc., was more attractive to Bank of America than Lehman could be. Merrill CEO John Thain, persuaded by the weekend's events that a deal was necessary to avoid a loss of confidence and a fate similar to Lehman's, entered into negotiations with Bank of America's Ken Lewis.

The liquidation of Lehman, last year's top underwriter of bonds backed by mortgages, is an amplified version of investment bank Drexel Burnham Lambert Inc., which filed for bankruptcy in 1990. Drexel made its name financing corporate takeovers in the 1980s using junk bonds pushed by Michael Milken.

Maintaining the confidence of the markets is only one of the challenges for an investment bank -- the other is retaining employees, recalled Fred Joseph, Drexel's CEO from 1985 to 1990.

``It's an awfully good business, but the assets go down in the elevator every night,'' said Joseph, 71. ``Despite the tough times, the Street's so small, everybody wants the really good guys.''

A key difference with Drexel is Lehman's central role in the over-the-counter derivatives markets, which have ballooned to $454 trillion since Drexel was in business. A default by Lehman on its obligations in that market could cause chain reactions throughout the markets that have never before seen a major financial counterparty fail to honor its obligations.

``The implications of one of the `too big to fail' institutions being allowed to fail is incredibly difficult to grasp, but suffice to say that a huge number of firms and securities are going to get affected,'' said Michael Auyeung, who manages about $500 million as chief executive officer at Pacific Mutual Fund Bhd. in Petaling Jaya, Malaysia. ``The reach of the carnage will be global and system-wide.''

Lehman's collapse wipes out a company that had a market value of $45.5 billion in February 2007. Merrill's sale to Bank of America for $29 a share, while about a 70 percent premium to Merrill's value on Friday, compares with the company's $86 billion market capitalization in January 2007.

``It's breathtaking that we've gone from five standalone firms to two very quickly,'' said Roy Smith, a finance professor at New York University's Stern School of Business and a former partner at Goldman Sachs. ``It's certainly going to cause Wall Street to rethink the strategy.''