Jan 2, 2012 Source: bbc.co.uk
A member of the US military has been charged with trying to take explosives onto a plane at a Texas airport, says the FBI. 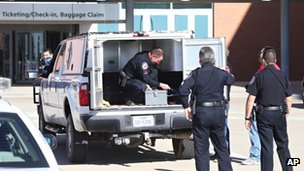 Thirty year-old Trey Scott Atwater was detained at a security checkpoint at Midland International airport, as he tried to board a flight on Saturday.

He was carrying explosives in military-grade wrapping, say detectives.

The suspect had been visiting relatives in Midland and was returning to a base in North Carolina when he was stopped.

The explosives were spotted in his carry-on baggage by an x-ray machine.

The airport terminal was evacuated for a short time while security checks were carried out.