Sep 29, 2015 Source: jpost.com
Israel and Germany may be key to initially financing a Catalan state independent from Spain, a judicial advocate for a sovereign Catalonia has recently suggested. 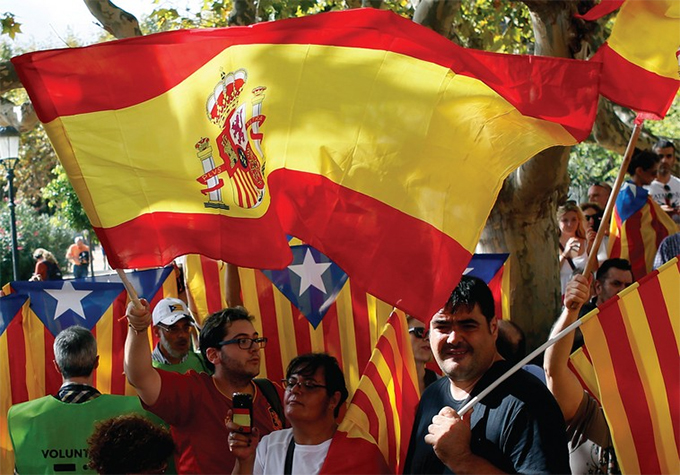 Barcelona High Court Judge Santiago Vidal said in the November-December edition of the local Delta magazine that the "facts indicates" that within three years a Catalan state could establish independence through "legal, political and peaceful means."

Without initial membership in the European Union, an independent Catalan state could not appeal to the Central Bank of Europe to finance its debts, said Vidal, a member of a pro-Catalan independence expert group.

"But there is a solution for this," Vidal said in the interview adding that "another state with solvency, basically speaking of Israel and Germany, will serve as our temporary bank."

Vidal downplayed the interviewer's doubts over whether it was "risky" to believe Israel would back a country seeking independence, given the Palestinian issue.

He noted in the interview that between 2016 and the end of 2017 "a judicial constitution would be presented for this new state, with or without a deal" with Madrid.

A long-standing breakaway movement in Catalonia, which accounts for one-fifth of Spain's economic output and has its own distinct culture and language, grew in strength during the recent years of deep recession.

Recently, Alon Bar, Israel's ambassador to Spain and Andorra, was interviewed by Nació Digital. Here is an excerpt of the interview.

Q. Welcome to Barcelona... once more.

A. I have been ambassador for nine months now, and I've been coming back every month. I love Barcelona, I really like it. Besides, we're collaborating closely with the Catalan government and with the Barcelona government, which justifies my frequent visits.

Q. Actually, you claim to love the city, but so do many of your fellow countrymen: 300,000 Israelis visit Barcelona each year—compared to 40,000 who visit Madrid. Is there a special relationship between Catalonia and Israel?

A. There is a special friendship, and some degree of admiration, for instance, in the comparable linguistic revival efforts by Hebrew and Catalan speakers. Also, let's not forget our meetings with Jordi Pujol right before the establishment of diplomatic relations between Spain and Israel. There is a special relationship which has only grown stronger over the years.

Q. You say that you're in good terms with the Generalitat and with the Barcelona city government. Could you be more specific?

A. I'm talking about a smooth and good relationship, both with president Artur Mas' team and his foreign affairs commission at the Catalan parliament, and with the Barcelona city government. We have common interests, especially with regards to commerce. The two administrations have signed common projects agreements in order to promote trade relations, and we've also strengthened the Catalan-Israeli chamber of commerce, which is extremely busy. I'm also talking about the opportunities which Israel can provide at a time of economic crisis: in the tech sector, in renewable energies, in water treatment technologies, in innovation. Actually, in many other things. For example, an Israeli artist will be present at the Grec festival for the first time ever.

Q. Is Catalonia a start-up nation?

A. I like that idea. We have common interests which we need to promote. We are similar but also different form each other. We can be partners and mutual clients. That's the way we work. Actually, today I'm in Barcelona to attend a small company meeting. You have initiative, more than in other parts of Spain.

Q. Do you know that some people call Catalans Jews?

A. Yes, yes, I know. A few days ago, I was attending a Catalan-Israeli cultural event at Sabadell, when someone mentioned it to me. It should be taken as a compliment. I know that when people in Spain talk about Jews, they don't necessarily do it in a positive way. It is true, there are certain Catalan national characteristics which correspond to Israeli ones. Thanks to your efforts you will come out of this crisis.

Q. Mr. Ambassador, here in Catalonia there's lots of people, even political analysts, who present Israel as an example to follow in our struggle for self-government. What do you think about this, considering that even our government is bracing itself for an imminent confrontation with Spain?

A. I think it's great that Israel can be an inspiration to Catalonia. However, it is up to Catalonia and Spain to decide the manner in which to resolve the demands for independence or for increased self-government. We don't have enough information about what's going on. However, we'd be delighted to collaborate with Catalonia no matter its relationship with Spain, be it as an autonomous region, a state, or a nation. We won't interfere in the conflict between the Catalan and Spanish governments, with whom we're in good terms as well.

Q. If Catalonia organized an independence referendum and its supporters won, what would Israel do?

A. I love that you have such high esteem for Israel. There are positive aspects to he creation of Israel. The reality of Israel came about thanks to a United Nations declaration establishing an Arab and a Jewish state. The Arabs did not abide by it, so when the British left, we just set up our own state. That's why I recommend setting up a state, respecting your neighbors, and negotiating with everybody—although that hasn't been our experience. I recommend achieving independence by negotiating with all your neighbors. Ever since we became a state, we've been looking for a way to achieve this, to live in peace with our neighbors.