The Children Who Went Up In Smoke

Jan 7, 2014 Source: blogs.smithsonianmag.com
For nearly four decades, anyone driving down Route 16 near Fayetteville, West Virginia, could see a billboard bearing the grainy images of five children, all dark-haired and solemn-eyed, their names and ages—Maurice, 14; Martha 12; Louis, 9; Jennie, 8; Betty, 5—stenciled beneath, along with speculation about what happened to them. Fayetteville was and is a small town, with a main street that doesn’t run longer than a hundred yards, and rumors always played a larger role in the case than evidence; no one even agreed on whether the children were dead or alive. What everyone knew for certain was this: On the night before Christmas 1945, George and Jennie Sodder and nine of their 10 children went to sleep (one son was away in the Army). Around 1 a.m., a fire broke out. George and Jennie and four of their children escaped, but the other five were never seen again. 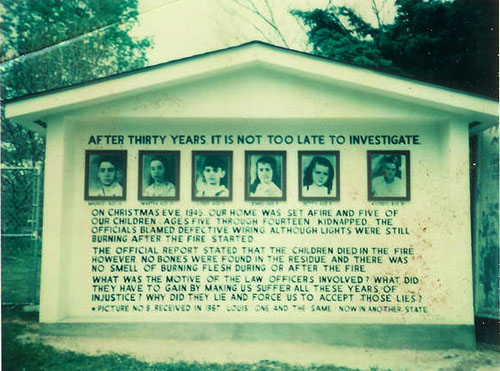 Billboard about the Sodder children, who went missing on Christmas Eve, 1945.
George had tried to save them, breaking a window to re-enter the house, slicing a swath of skin from his arm. He could see nothing through the smoke and fire, which had swept through all of the downstairs rooms: living and dining room, kitchen, office, and his and Jennie’s bedroom. He took frantic stock of what he knew: 2-year-old Sylvia, whose crib was in their bedroom, was safe outside, as was 17-year-old Marion and two sons, 23-year-old John and 16-year-old George Jr., who had fled the upstairs bedroom they shared, singeing their hair on the way out. He figured Maurice, Martha, Louis, Jennie and Betty still had to be up there, cowering in two bedrooms on either end of the hallway, separated by a staircase that was now engulfed in flames.

He raced back outside, hoping to reach them through the upstairs windows, but the ladder he always kept propped against the house was strangely missing. An idea struck: He would drive one of his two coal trucks up to the house and climb atop it to reach the windows. But even though they’d functioned perfectly the day before, neither would start now. He ransacked his mind for another option. He tried to scoop water from a rain barrel but found it frozen solid. Five of his children were stuck somewhere inside those great, whipping ropes of smoke. He didn’t notice that his arm was slick with blood, that his voice hurt from screaming their names.

His daughter Marion sprinted to a neighbor’s home to call the Fayetteville Fire Department but couldn’t get any operator response. A neighbor who saw the blaze made a call from a nearby tavern, but again no operator responded. Exasperated, the neighbor drove into town and tracked down Fire Chief F.J. Morris, who initiated Fayetteville’s version of a fire alarm: a “phone tree” system whereby one firefighter phoned another, who phoned another. The fire department was only two and a half miles away but the crew didn’t arrive until 8 a.m., by which point the Sodders’ home had been reduced to a smoking pile of ash.

George and Jeannie assumed that five of their children were dead, but a brief search of the grounds on Christmas Day turned up no trace of remains. Chief Morris suggested that the blaze had been hot enough to completely cremate the bodies. A state police inspector combed the rubble and attributed the fire to faulty wiring. George covered the basement with five feet of dirt, intending to preserve the site as a memorial. The coroner’s office issued five death certificates just before the new year, attributing the causes to “fire or suffocation.”

But the Sodders had begun to wonder if their children were still alive.