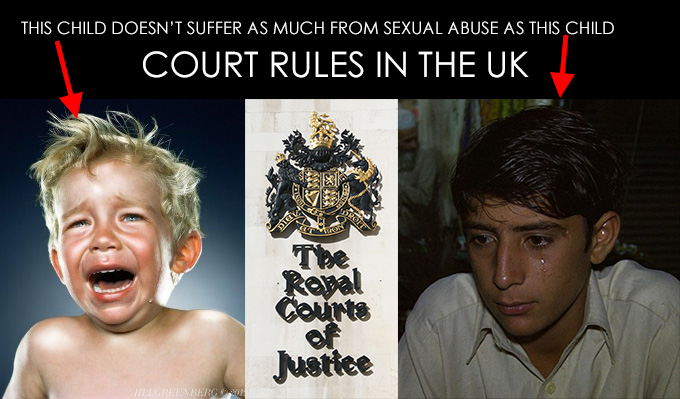 Asian victims of child sex crimes suffer more than white children and their attackers should accordingly be punished more severely, the court of appeal has ruled.

Ruling on a convicted paedophile’s appeal for a lesser sentence, Mr Justice Walker said it was right that Jamal Muhammed Raheem Ul Nasir had been given a longer spell in prison because his victims were Asian.

Ul Nasir, 32, carried out the assaults on two underage girls and was jailed for a total of seven years at Leeds crown court in December last year. He was convicted of two counts of sexual assault on a child under 13 and four counts of sexual activity with a child.

The judge who originally jailed him, Sally Cahill QC, specifically said that the fact the victims were Asian had been factored in as an “aggravating feature” when passing sentence.

She explained at the time that the victims and their families had suffered particular shame in their communities because of what they had endured. There were also cultural concerns that the girls’ future prospects of being regarded as a good candidate for arranged marriages could be damaged.

Lawyers for Ul Nasir, 32, of Liversedge, West Yorkshire, argued at the criminal appeal court in London this month that his sentence had been unfairly inflated.

Their complaints, however, were rejected by Walker, who said: “The victims’ fathers were concerned about the future marriage prospects for their daughters. Judge Cahill was having particular regard to the harm caused to the victims by this offending.

“That harm was aggravated by the impact on the victims and their families within this particular community.”

The argument that Ul Nasir was given a longer sentence due to his own “ethnic and religious origin” was based on “a misconception”, Walker added. “The judge who tried the case was in the best position to determine the correct sentence.”

Sitting alongside Lord Justice Laws and Mr Justice Mitting, Walker concluded: “There is no basis for saying that Judge Cahill adopted an incorrect starting point. This application for leave to appeal against sentence must be refused.”

Mark Fenhalls QC, chair of the Criminal Bar Association, said that the Sentencing Council’s guidelines require judges to consider, as a priority, the seriousness of the psychological and physical harm suffered by the victim.

He said: “The justice system does not look to favour one section of the community over another. The judgment reflects the duty of judges to take proper account of the extent of the harm suffered by individual complainants when deciding on the appropriate length of sentence in each case.”

Commenting on the case, an NSPCC spokesman said that any sentence should not depend on cultural background. “British justice should operate on a level playing field and children need to be protected irrespective of cultural differences,” he said.

“Regardless of race, religion, or gender, every child deserves the right to be safe and protected from sexual abuse, and the courts must reflect this. It is vital that those who commit these hideous crimes are punished to the full limit of the law.”

The court of appeal decision is in line with new sentencing guidelines for sex offences, which came into effect in April last year. Previously, when assessing the severity of a crime, judges were advised to consider which body parts were touched in a rather mechanistic cataloguing of the degree of wrongdoing.
The new guidelines are in line with current thinking in the criminal justice system, which is far more focused on the effect of crimes on victims.

The Sentencing Council’s guidelines do not specifically refer to race or ethnic background at all. They do, however, say that judges should consider the psychological effect of any attack on the victim. That in turn can include the background of the victim in assessing the seriousness of the offence. Judges, under the guidelines, are therefore entitled to consider the degree of harm inflicted in the context of the damage suffered by the victim.