The Extermination of Whites in Europe: "We Are the Last 3 German Children in Our School." 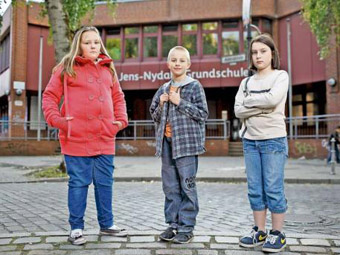 There are now only three German children left in the Jens-Nydahl-Grundschule in Kreuzberg, Berlin—a shocking demonstration of how Europe is being ethnically cleansed by Third World immigration.

A story in the Bild magazine on the development was headlined: "We are the last 3 German children in our German school. The rest are Muslims."

Kreuzberg in Berlin has long been a destination for Turkish immigration into the German capital, and now the inevitable point has been reached where Germans have been ethnically cleansed from that part of the city.

In the playground Talina (11), Svenja (11) and Jason (9) can't understand a word. Because, here, their classmates only speak Turkish and Arabic, the Bild article continued.

Here 99 percent of the 313 pupils have an immigrant (Muslim) background. For 285 of those, the parents receive financial support from the state.

Talina is in the 6th year. "When she first went to school, she could read and write her first words. Her fellow pupils couldn't say "Thank you", "Please" or "Good morning"," says her mother Mara M. (45).

The German children are teased about being "pork eaters". Her classmate Svenja: "I wish there were more pupils who could speak my language." Jason's mother says: "It's not good that there are so few German children at the school."

A teacher was quoted by Bild as saying: "We have tried in vain to get Germans in the school. Now we're concentrating on the clientele that we have. In the canteen, there is no more pork."

Kreuzberg is now the largest Turkish city outside of Turkey and is known as "Kleine Istanbul" (Little Istanbul).

According to Berlin government statistics, 90 percent of the inhabitants of certain areas of Kreuzberg live below the poverty level and subsist on taxpayer handouts'making a mockery of the liberal claim that immigration into Europe is needed to "keep the pension system and economy running."