Sep 19, 2012 Source: nytimes.com
A historian of early Christianity at Harvard Divinity School has identified a scrap of papyrus that she says was written in Coptic in the fourth century and contains a phrase never seen in any piece of Scripture: “Jesus said to them, ‘My wife ...’ ”

The faded papyrus fragment is smaller than a business card, with eight lines on one side, in black ink legible under a magnifying glass. Just below the line about Jesus having a wife, the papyrus includes a second provocative clause that purportedly says, “she will be able to be my disciple.”

The finding was made public in Rome on Tuesday at the International Congress of Coptic Studies by Karen L. King, a historian who has published several books about new Gospel discoveries and is the first woman to hold the nation’s oldest endowed chair, the Hollis professor of divinity.

The provenance of the papyrus fragment is a mystery, and its owner has asked to remain anonymous. Until Tuesday, Dr. King had shown the fragment to only a small circle of experts in papyrology and Coptic linguistics, who concluded that it is most likely not a forgery. But she and her collaborators say they are eager for more scholars to weigh in and perhaps upend their conclusions.

Even with many questions unsettled, the discovery could reignite the debate over whether Jesus was married, whether Mary Magdalene was his wife and whether he had a female disciple. These debates date to the early centuries of Christianity, scholars say. But they are relevant today, when global Christianity is roiling over the place of women in ministry and the boundaries of marriage.

The discussion is particularly animated in the Roman Catholic Church, where despite calls for change, the Vatican has reiterated the teaching that the priesthood cannot be opened to women and married men because of the model set by Jesus.

Dr. King gave an interview and showed the papyrus fragment, encased in glass, to reporters from The New York Times, The Boston Globe and Harvard Magazine in her garret office in the tower at Harvard Divinity School last Thursday.

She repeatedly cautioned that this fragment should not be taken as proof that Jesus, the historical person, was actually married. The text was probably written centuries after Jesus lived, and all other early, historically reliable Christian literature is silent on the question, she said. 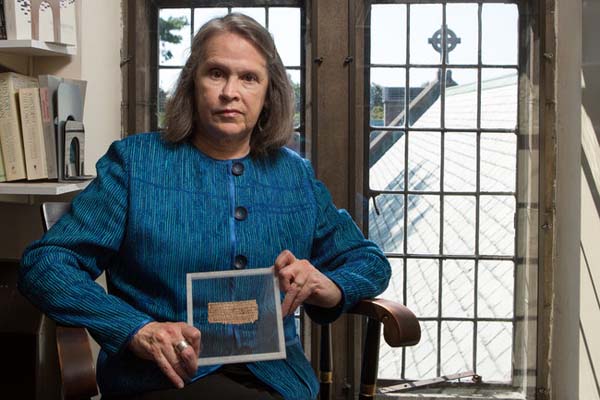 King of Kings: Professor Karen L. King, in her office at Harvard Divinity School, held a fragment of papyrus that she says was written in Coptic in the fourth century and contains a reference to Jesus’ wife.

But the discovery is exciting, Dr. King said, because it is the first known statement from antiquity that refers to Jesus speaking of a wife. It provides further evidence that there was an active discussion among early Christians about whether Jesus was celibate or married, and which path his followers should choose.

“This fragment suggests that some early Christians had a tradition that Jesus was married,” she said. “There was, we already know, a controversy in the second century over whether Jesus was married, caught up with a debate about whether Christians should marry and have sex.”

Dr. King first learned about what she calls “The Gospel of Jesus’s Wife” when she received an e-mail in 2010 from a private collector who asked her to translate it. Dr. King, 58, specializes in Coptic literature, and has written books on the Gospel of Judas, the Gospel of Mary of Magdala, Gnosticism and women in antiquity.

The owner, who has a collection of Greek, Coptic and Arabic papyri, is not willing to be identified by name, nationality or location, because, Dr. King said, “He doesn’t want to be hounded by people who want to buy this.”

When, where or how the fragment was discovered is unknown. The collector acquired it in a batch of papyri in 1997 from the previous owner, a German. It came with a handwritten note in German that names a professor of Egyptology in Berlin, now deceased, and cited him calling the fragment “the sole example” of a text in which Jesus claims a wife.