The Meaning of Sacred Geometry 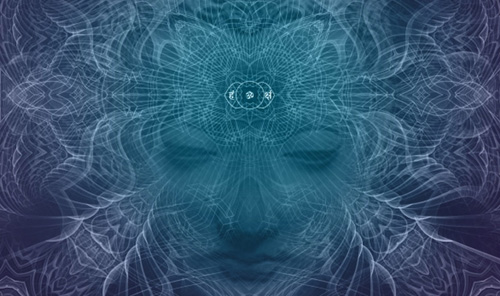 Most of us tend to think of geometry as a relatively dry, if not altogether boring, subject remembered from our Middle school years, consisting of endless axioms, definitions, postulates and proofs, hearkening back, in fact, to the methodology of Euclids Elements, in form and structure a masterly exposition of logical thinking and mental training but not the most thrilling read one might undertake in their leisure time. While the modern, academic approach to the study of geometry sees it as the very embodiment of rationalism and left brain, intellectual processes, which indeed it is, it has neglected the right brain, intuitive, artistic dimension of the subject. Sacred geometry seeks to unite and synthesize these two dynamic and complementary aspects of geometry into an integrated whole. Robert Lawlor addresses this fundamentally dualistic nature of geometry in his essential work: Sacred Geometry – Philosophy and Practice (1982), in reference to a medieval representation of geometry as a woman seated at a table, with compasses in hand, surrounded by the implements of the art:

“Geometry as a contemplative practice is personified by an elegant and refined woman, for geometry functions as an intuitive, synthesizing, creative yet exact activity of mind associated with the feminine principle. But when these geometric laws come to be applied in the technology of daily life they are represented by the rational, masculine principle: contemplative geometry is transformed into practical geometry.”

Lawlor here expresses a crucial idea in the definition of Sacred Geometry—it has both a contemplative side and a practical side, and an intuitive and intellectual side, it is an activity both right brained and left brained.

Further differentiating Sacred Geometry from the ordinary geometry of our school days is its’ relation to number and symbol. This difference, I think, is succinctly expressed by Miranda Lundy in her superb little book entitled simply Sacred Geometry (2001)

“Sacred Geometry charts the unfolding of number in space. It differs from mundane geometry purely in the sense that the moves and concepts involved are regarded as having symbolic value, and thus, like good music, facilitate the evolution of the soul.”

Sacred Geometry, then, charts the unfolding of number in space and has symbolic value and thereby has conferred upon it a qualitative status absent from common geometry. And here I must add that magnifying the inherent power of Sacred Geometry is the fact that it also charts the unfolding of number in time. This is an idea of such compelling ramifications that I must return to it in detail in another article.

At the very earliest appearance of human civilization we observe the presence and importance of geometry. It is clearly evident that geometry was comprehended and utilized by the ancient Master Builders, who, laboring at the dawn of civilization some four and one half millennia ago, bestowed upon the world such masterworks as the megalithic structures of ancient Europe, the Pyramids and temples of Pharaonic Egypt and the stepped Ziggurats of Sumeria. That geometry continued to be employed throughout the centuries from those earliest times until times historically recent is also clearly evident. That it was made use of by cultures far-flung about the globe is evident as well, finding expression in China, Central and South America, in pre-Columbian North America amongst Native Americans, in Africa, SE Asia and Indonesia, Rome and of course in classical Greece and in Europe, from the Megalithic era some 4000 years ago, as stated, and again some 3000 years later, magnificently expressed during the Gothic era of cathedral building.

Geometry is especially associated with Classical Greece and such illustrious figures as Pythagoras, Plato and Euclid, who wrote the first actual textbook on the subject, the aforementioned Elements. Geometry has also been held in particular reverence and high esteem by the ancient order of Freemasons, which, of course, hearkens back to the great Cathedral Building era of the 12th through the 14th centuries, from whom modern Masons derive their pedigree.

From the foregoing is should be obvious that geometry was, and is, closely associated with Architecture, that great manuscript of the human race, which provided the first and primary vehicle for the human employment of geometry. That it is closely associated with Art, Music and Handicraft is obvious as well to the student of the history of these subjects.  Ultimately, it must be appreciated that it was apparent to archaic peoples, as it is becoming increasingly apparent to contemporary students of the subject, that geometry is intrinsic to the very order of Nature itself, both biological and cosmic, and, now, thanks to scientific inquiry, the realization dawns that geometry lies at the basis of the molecular and atomic levels of creation.

The word Geometry itself means ‘Earth measure,’ which definition is generally attributed to the fact that the ancient Egyptians regularly utilized geometry to resurvey the fertile farmlands of the Nile river floodplain in late summer, after existing boundaries were buried by the deposition of thick layers of alluvium from the annual flooding of the river.  However, I would suggest the possibility that the idea of ‘Earth measure’ applied not only to the local measure of tracts of agricultural land in Egypt, but also on a much larger scale, literally, to the measure of the Earth itself, in a geodetic sense. More on that compelling idea later.

Anecdote has it that over the entrance to Plato’s Academy was inscribed the phrase “Let none enter here who are ignorant of geometry.”  Whether or not this is a historical fact, the idea should make sense to anyone who has attempted to ascend the heights of metaphysical experience and knowledge, that a form of mental training designed to develop the rational faculties and the reasoning ability to high levels of proficiency, would be a prerequisite for successful completion of the metaphysical journey and avoidance of the many traps, snares and pitfalls that await the inattentive pilgrim who presumes to tread the path of knowledge.

An old Masonic lecture from several centuries ago states:

“If we consider the symmetry and order which govern all the works of creation, we must admit that geometry pervades the universe…By geometry we may curiously trace nature through her various windings to her most concealed recesses; by it we discover how the planets move in their respective orbits and demonstrate their various revolutions; by it we account for the return of the seasons and the variety of the scenes which each season displays to the discerning eye……By it we discover the power, wisdom and goodness of the Grand Artificer of the Universe and view with delight the proportions which connect the vast machine…”


We are here introduced to a another fundamental idea lying at the heart of Sacred Geometry,— that it provided the means by which God, as the Great Architect of the Universe, was able to frame the template of Creation. Freemasons, Hermeticists and Initiates into the Mysteries have for centuries held the conception of the Universe as the material expression of a hidden reality, an invisible blueprint, set down by the hand of the Grand Geometrician, and to which the study of Geometry provided the key and the means to render visible that which is concealed from the undiscerning and untrained eye, and that these fundamental geometric relations, manifested through form, pattern and number, form the very basis of harmony.

The idea, vision rather, of God as a Great Architect and Geometrician has found expression through numerous sources throughout the ages.The great Christian theologian St. Augustine, who held both Pythagoras and Plato in high regard, grasped the significance of geometric form, pattern and proportion, and their representation through numerical symbolism, when he stated:

“Numbers are the thoughts of God.”

And further when he said:

“The construction of the physical and moral world alike is based on eternal numbers.”

Galileo clearly understood this geometrical/numerical dimension of reality when he said:

“Mathematics is the alphabet with which God has written the universe.”

And so did Johannes Kepler when he said:

“Geometry existed before the creation. It is co-eternal with the mind of God…Geometry provided God with a model for the Creation…”

Here in the Keplerian view Geometry is clearly envisioned as existing upon an archetypal level, prior to the manifestation of material creation, and serving as the model utilized by the Great Architect. Through the study and practice of Sacred Geometry this invisible geometric matrix begins to reveal itself as the template upon which the material universe, expressed through space and time, has been framed by the hand of the Great Architect.

The famous early 20th century architect Le Corbusier obviously appreciated the fundamental idea of archetypal geometry and its’ expression through number when he wrote:

“Behind the wall, the gods play, they play with numbers, of which the universe is made up.”

As did French architect Paul Jacques Grillo, who wrote:

“The world around us is a world of numbers―numbers that spell life and harmony. They are organized by the geometry of figures, all related to one another according to a sublime order, into dynamic symmetry.  Glimpses into this magnificent kingdom form the basis of all our knowledge and it seems that in this domain the ancient civilizations had gone further than modern science.”

Read the full article at: sacredgeometryinternational.com